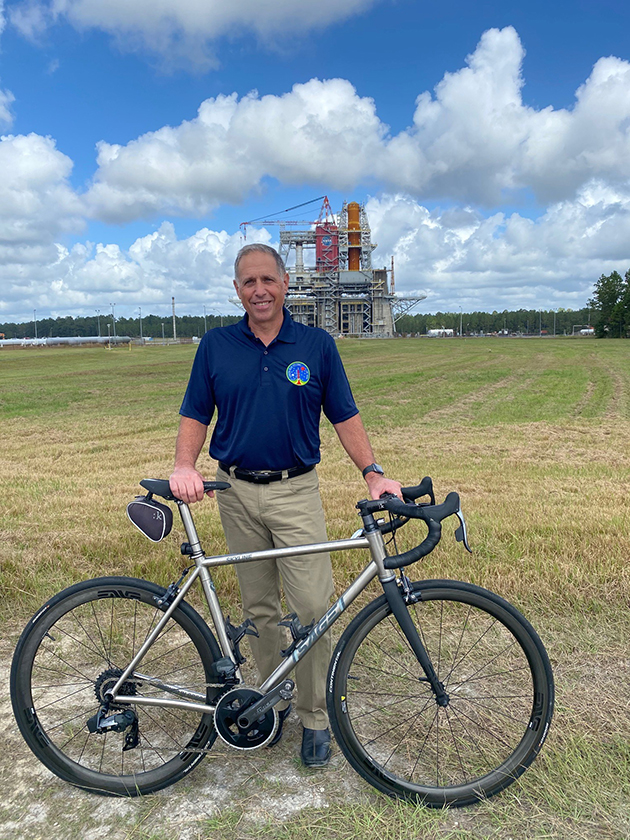 Mark Nappi, director of Operations for the NASA Space Launch System (SLS) Core Stage Green Run, rides his bike around NASA’s Stennis Space Center in Mississippi to clear his mind as he prepares for one of the largest milestones in his career – the core stage’s upcoming hot-fire test.

After a long day at work, Mark Nappi pulls his bike off his car rack and rides for hours around NASA’s Stennis Space Center in Mississippi.

Cycling 150 to 200 miles a week is a way to clear his mind as he prepares for one of the largest milestones in his career as director of Operations for the NASA Space Launch System (SLS) Core Stage Green Run.

The Green Run is a series of tests on the SLS deep-space rocket’s cryogenic core stage, for which Boeing is prime contractor. The tests, which began earlier this year, are expected to culminate as soon as Jan. 16 with the hot-firing of the stage’s four RS-25 engines while on the Stennis test stand.

“Cycling is like meditation. Your mind goes off, you relax and you are stress-free,” said Nappi, who has been cycling for about 10 years, including competing a couple of times a year after previously running in triathlons and marathons. “Cycling helps you to also be very patient at work, think more clearly and deal with issues.”

Nappi attributes his ability to be a calming influence both to the bike rides and to his experience as an engineer supporting and making complex decisions for more than 100 space shuttle launches. Nappi’s 35 years in human spaceflight – 30 at Kennedy Space Center – are helping him lead this historic chapter of sending the next man and first woman to the moon as part of NASA’s Artemis program, followed by missions to Mars and beyond.

Nappi said Green Run is moving steadily forward, despite five hurricanes and COVID-19 impacts, due to a dedicated team and a new design that has been “rock solid.”

“They have really excelled at doing everything at a high level of safety and quality.”

Nappi didn’t know his career would be in space after majoring in ocean engineering at the Florida Institute of Technology. His goal was to work as a civil engineer on offshore oil platforms, but months before his graduation, the bottom fell out of the oil industry.

After working for the world’s largest shipbuilding company for less than a year, Nappi followed his then-girlfriend – now wife of 34 years – to Florida to work at Lockheed Martin. He worked on all the moving parts of the shuttle, as well as serving on console during missions and on the runway for landings.

“I just fell into the right group. It was almost like this was made for me,” Nappi said. “Seeing a launch every 90 days was icing on the cake. It’s an emotional event. It really is something that moves you.”

He continued to grow and take on higher management and director roles at United Space Alliance, including associate program manager for Ground Operations and, later, vice president and Florida site director, for which he led 6,000 employees responsible for all space shuttle vehicle operations leading up to and including the orbiter’s final launch.

“I got to live the entire life cycle of that program. While it was sad to see it go, we knew we had something bigger and more powerful coming,” Nappi said.

His last role at Kennedy Space Center was senior vice president of the Space Services Group with Vencore Systems and Services, responsible for the design and launch infrastructure for NASA’s Space Launch System and Orion spacecraft for what is now the Artemis program. He was then hired onto Boeing in 2015 as director of the Core Stage Integrated Product team to help complete the design of SLS, production and final assembly at NASA’s Michoud Assembly Facility in New Orleans.

“The first time I walked through the factory and saw how massive this core stage was, I was taken aback by how powerful it’s going to be,” Nappi said.

“It’s the most powerful rocket ever built, so you can just imagine the scene on the Space Coast when it launches. It’s going to be incredible,” Nappi said. “We are pushing the envelope of exploration and technology. There are going to be remarkable technical and scientific discoveries as we learn how to live on another planet that will benefit everyday life on Earth.”

Nappi’s excitement about spaceflight has passed to the next generation, as one of his two sons now works on the SLS program for another contractor at Kennedy Space Center.

“Knowing you are contributing to knowledge that will go on forever, is also amazing,” Nappi said.