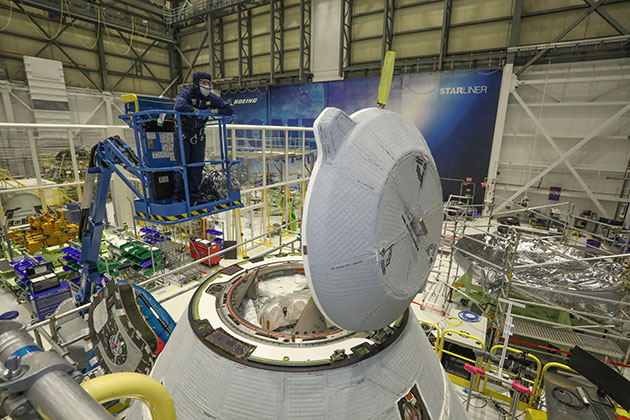 A technician observes the functional test of the NASA Docking System (NDS) cover in the Commercial Crew and Cargo Processing Facility at Kennedy Space Center.

Teams in the Starliner assembly facility at Kennedy Space Center in Florida recently installed and tested a new NASA Docking System (NDS) cover on the CST-100 Starliner spacecraft that will fly the Orbital Flight Test (OFT-2) mission in March. The NDS, designed and built by Boeing, is a standardized mechanism that allows two spacecraft to connect safely with each other autonomously to create a short tunnel so crews can move between the two vehicles.

The new cover will provide additional protection for the automated docking system during atmospheric re-entry, where the capsule faces temperatures of about 3,000 degrees Fahrenheit prior to landing at one of five potential locations in the western United States.

“The NDS was originally designed for one-time use, however, adding the entry cover to protect its components during re-entry is expected to extend the system’s life for multiple missions,” said Vajid Vayda, a Boeing system test engineer.

Vayda previously supported integrated functional testing on the International Space Station (ISS) program for 17 shuttle missions, and is now responsible for generating the Detail Operating Procedure (DOP) to perform the integrated functional testing of the NDS cover on the spacecraft. During the ground operations, a tool balancer connected to a facility crane was used to off-load the weight of the cover in order to facilitate the open and close cycles of the NDS.

“It was very exciting to see the movement of the NDS hardware as I commanded them and completed the function,” said Vayda. “The NDS team will be watching the data coming from the NDS hardware closely after we get to orbit and as we approach the ISS on our next flight.” 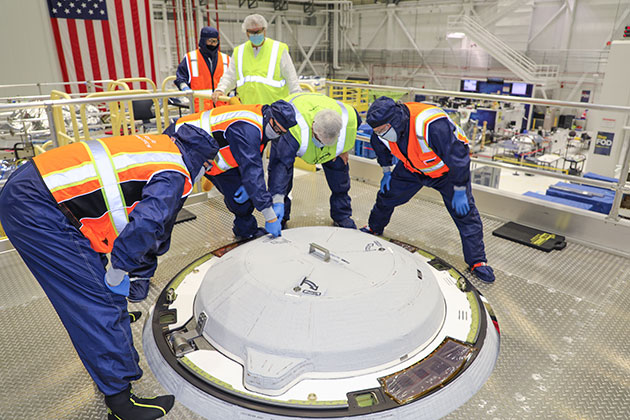 The NDS cover is located under the crew module’s semispherical Ascent Cover during launch, and is only visible during orbital operations after the Ascent Cover jettisons. It acts as a hatch on the top of the vehicle that will open for docking with the Boeing-built International Docking Adapters on the ISS and close after undocking. The NDS cover was installed on the OFT-2 vehicle in December.

“The NDS cover and docking system will be inspected and checked out for each and every flight,” said Vayda. “I expect the NDS to last for a long time, providing a bridge for the Starliner to connect with the ISS for many missions to come.”

The Starliner crew module is reusable for multiple missions. It is one of two spacecraft built for NASA’s Commercial Crew Program to carry crews and cargo to low Earth orbit and the ISS — expanding utility, and providing additional research time and broader opportunities for discovery on the orbiting laboratory. 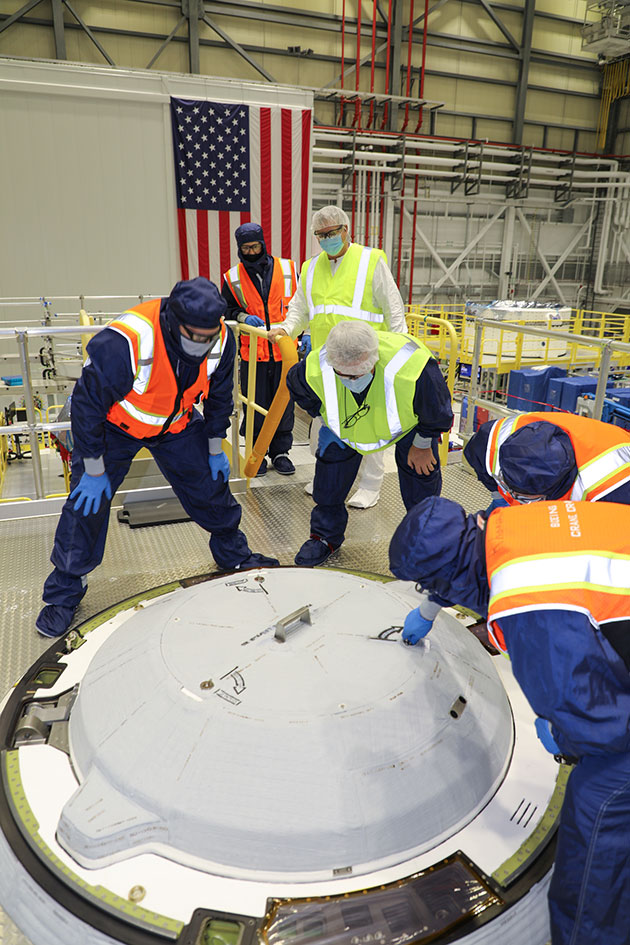