Successfully developing and building the world’s most powerful rocket along Hurricane Alley produces a resilient workforce.

Facing down a pandemic, on top of a wave of storms bearing down on the 70-year-old NASA Michoud Assembly Facility, pushed the Space Launch System, or SLS, team to a new level of innovation and determination.

The SLS core stage for NASA’s Artemis I mission is on a test stand at Stennis Space Center in Mississippi, preparing for what could be the last of a series of major tests to prove its ability to launch to the moon. At the same time, the next two core stages are in production at Michoud for follow-on crewed missions, as an even more powerful SLS version takes shape with the Boeing-designed and -built Exploration Upper Stage.

All the main core stage structures for Artemis II, the first mission with astronauts, have been built and are being outfitted with electronics, feedlines and other components. The Artemis II core stage liquid oxygen tank is being prepared to be joined with the forward skirt and intertank in early 2021, while the liquid hydrogen tank is being sprayed with primer and the engine section is outfitted with the systems that will manage the four RS-25 engines to be installed later.

Technicians are welding the core stage structures for the Artemis III mission, which will land the first woman and next man on the lunar surface, through a process called friction stir welding.

“Our teams have nailed the art of the possible, always pushing through with new ideas, and pulling in fresh perspectives from across Boeing, as well as our supply chain,” said John Shannon, Boeing vice president and program manager for SLS. “Innovation is how we’ve beaten both technical and schedule challenges.”

Amid forced shutdowns and facility damage due to six major weather events in 2020, plus accommodations needed to minimize the spread of COVID-19, workers at Michoud have shifted across roles, responsibilities and locations to make repairs and continue to advance. The margin they and the Stennis team built into schedules early on helped save days that were later wiped out by the pandemic, weather and technical issues, as well as supply-chain delays as subcontractors dealt with many of the same challenges.

“I would like to extend [NASA’s] appreciation to the entire workforce, but especially to the workforce directly impacted by the 6 hurricanes and tropical storms and the COVID-19 pandemic,” NASA SLS Program Manager John Honeycutt wrote to the Boeing team in November. “The 6 hurricanes initially impacted SLS critical path by 42 days, but due to the Boeing team’s dedication and innovative thinking they mitigated the impact to the critical path to only 25 days. The SLS program wants to commend the team for the grace and professionalism that they continue to exhibit each day.

“The team’s progress on Core Stage 2, quality process improvements at [Michoud], and ongoing efforts to improve integration and communication while dealing with the most active hurricane season and a global pandemic is very impressive and much appreciated,” Honeycutt concluded. 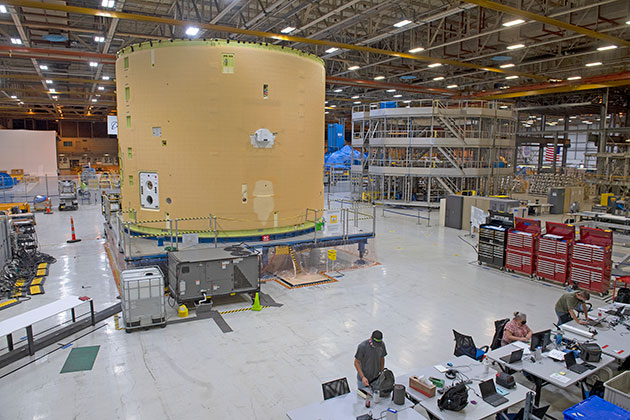