Today, NASA provided an update on the January 16 Space Launch System (SLS) tests at Stennis Space Center, sharing the test outcomes and an explanation of the circumstances that led to the early test shutdown. Read the full NASA blog post here.

The NASA blog post states that “the shutdown after firing the engines for 67.2 seconds on Jan. 16 was triggered by test parameters that were intentionally conservative to ensure the safety of the core stage during the test.” The post also says, “The rocket’s hardware is in excellent condition.”

The conservative parameters that triggered Saturday’s shutdown are applicable only to the ground test, to ensure the protection of the core stage that is planned for use in NASA’s Artemis I mission.

The NASA update also stated that data analysis is continuing to help the team determine if a second Hot Fire test is required.

The January 16 tests were part of an eight-test campaign at Stennis Space Center to certify the SLS rocket cryogenic core stage manufacture and design. The NASA, Boeing and Aerojet Rocketdyne team successfully completed the seventh test, Wet Dress Rehearsal, before beginning the eighth and final test known as Hot Fire, when all four engines of the world’s most powerful rocket were ignited for the first time. 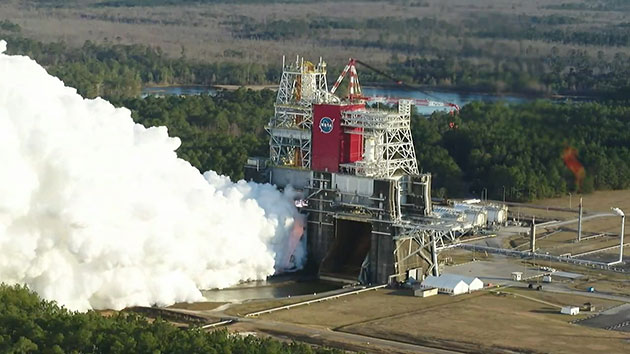 The Boeing-built core stage for the first NASA Space Launch System rocket is seen in the B-2 Test Stand during a scheduled hot fire test, Saturday, Jan. 16, at NASA’s Stennis Space Center near Bay St. Louis, Mississippi. Water flows from the stand during the test, producing huge clouds of steam.

“Our test parameters demonstrate our safety-first approach and were appropriately conservative. This core stage is a high-value flight article that will return America to deep space. Our goal for this test was to collect data on the main propulsion and thrust vector control systems, a step toward the first flight test that will certify the vehicle design. Our redline limits were set to achieve data collection without unnecessarily risking the system.”