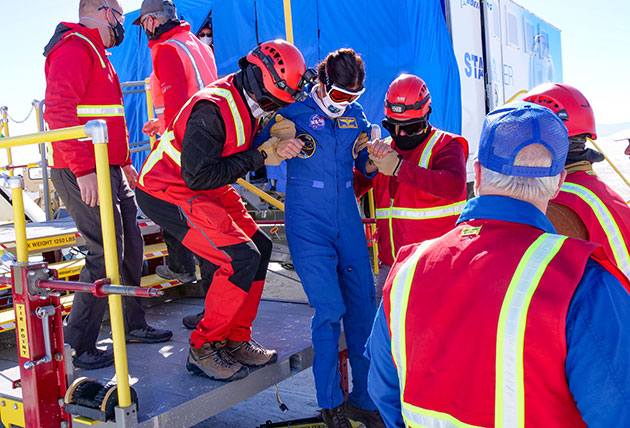 Boeing’s Mission Integration and Operations had a Mission Dress Rehearsal in November, including full medical evacuation of simulated crew members from the landing site at White Sands Space Harbor in New Mexico.

Landing and recovery teams from Boeing and NASA recently completed a crew landing dress rehearsal at the U.S. Army’s White Sands Space Harbor in New Mexico, in preparation for missions returning with astronauts from the International Space Station as part of the agency’s Commercial Crew Program.

When astronauts land after their journey to the space station on Boeing’s CST-100 Starliner spacecraft, recovery teams must be able to remove the crew from the capsule quickly. In the unlikely event of a medical emergency, Boeing and NASA also partner with local trauma teams who are trained to provide the highest level of coordinated, specialized care.

“We are working with Level 1 trauma centers that are fully staffed and have a full complement of doctors and nurses for a variety of conditions and disciplines, allowing us to plug into a network of the best very quickly,” said Michael Schertz, Boeing Starliner medical coordinator and a leader on the landing and recovery team.

During the training exercise, the team simulated a scenario in which a crew member needed to be transferred to The University of New Mexico Hospital (UNMH) in Albuquerque via an Air Center medical helicopter. UNMH is the only academic health center in the state and serves as the primary teaching hospital for The University of New Mexico’s School of Medicine, which means their staff uses cutting edge medical research, technology and specialty patient care.

“While the likelihood of a medical incident requiring this level of care is small, we just don't know enough to rule out the risk. As such, we prepare for the worst in the hope we never need it,” said Chris Ferguson, Boeing astronaut and director of Commercial Crew Mission Integration and Operations.

Boeing’s Starliner is designed to land on land, and is expected to touch down at one of five potential landing zones in the western United States, including two in New Mexico, and one in Utah, Arizona and California. Safety teams are coordinating with the University of Utah Health for the Utah landing site, Banner - University Medical Center Tucson, an academic hospital affiliated with the University of Arizona, for the Arizona landing zone, and Edwards Air Force Base for California landings.

During the final “run-for-record,” obstacles were introduced in order to simulate an emergency scenario, in which the team succeeded at locating the Starliner, configuring capsule support equipment, opening the hatch and removing the crew in less than an hour.

“The landing and recovery teams work ‘on the clock,’” Ferguson said. “There are reasons why the crew should be extracted from the spacecraft within a fixed time of about an hour. This takes all the skill, coordination and practice of a racing car pit crew. As such, this was the teams’ graduation event, and they did very well. I was very proud of their performance.”

Most of the landing sites are very remote and can experience extreme temperature swings within a 24-hour period. There is also wildlife, including poisonous scorpions and snakes that can injure staff. This is factored into the plans ensuring redundancy is in place to transport anyone who needs care without hindering the landing and recovery operations.

These exercises are a necessary step in preparing the teams for all aspects of a mission ahead of Boeing’s second uncrewed Orbital Flight Test (OFT-2), as well as crewed flights to the space station.

Boeing also trains with the White Sands and Dugway Fire Departments, and several Cochise County municipalities to ensure this continuity of care is available at all of the potential landing sites.

“While we bring many of our own resources to support a landing, we rely heavily on the local authorities for assistance with security and protection of the public during landing events,” Ferguson said. “The trauma teams at our medical facilities also have been very interested to participate and learn from the NASA experts about space medicine. As spaceflight becomes more commonplace, there will be a growing need for familiarity with this field. It’s a very special role, and they have risen to meet it.”

NASA and Boeing are targeting no earlier than March 25 for the launch of OFT-2, and summer 2021 for the company’s Crew Flight Test (CFT). CFT crew members Barry “Butch” Wilmore, Mike Finke and Nicole Mann continue to train for the inaugural crewed flight test of the Starliner spacecraft. 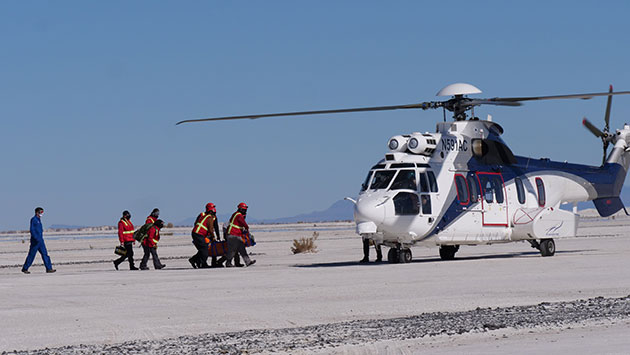 Boeing’s Mission Integration and Operations had a Mission Dress Rehearsal in November, including full medical evacuation of simulated crew members from the landing site at White Sands Space Harbor in New Mexico.