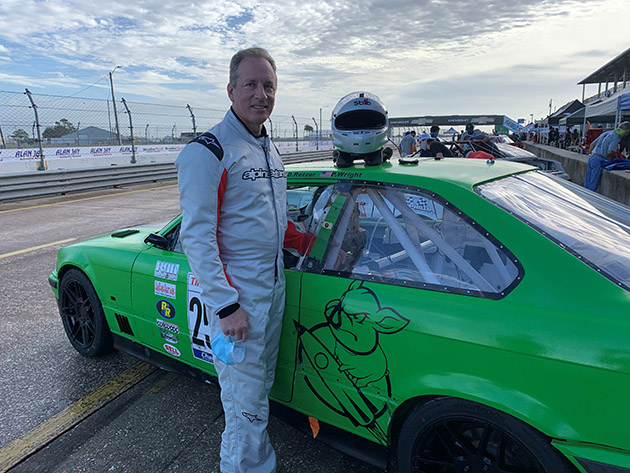 Space Launch System Green Run test team leader Paul Wright compares building and testing the deep space rocket’s core stage to getting his 1995 BMW 325i ready for an endurance race: “You have to be prepared not only for the race but also for potential issues.”

When Paul Wright is behind the wheel of his race car going more than 140 mph (225 kilometers per hour) around the track, it’s a thrill like almost no other.

The Boeing-built NASA SLS rocket core stage is the world’s tallest and most powerful rocket stage. It will provide unsurpassed lift and speed for uncrewed and human exploration of the moon, Mars and beyond.

Wright says race cars and rockets have more in common than speed: Organizational skills are a must.

“It takes a lot of planning to build a rocket, and it takes even more planning for the hot-fire test, much like getting a car ready for the 10- to 12-hour races I enter,” Wright said. “You have to be prepared not only for the race but also for potential issues that can happen.”

Wright has been involved with SLS since almost the beginning, developing the test team and program, including the developmental, qualification and functional testing. He has been an owner and driver in the ChampCar Endurance Series for the past four years.

“It’s been such a thrill seeing SLS turn from a 3D CAD [Computer Aided Design] model and product schedules into cryogenic fuel tanks and finally a 212-foot-tall core stage,” Wright said. “Just being a part of all this is extraordinary and gratifying.”

As BT&E Lab Test Operations senior manager at NASA’s Stennis Space Center in Mississippi, Wright manages the SLS Green Run test team. Green Run is a series of eight major tests that validates the core stage design and ensures it and all future core stages will be ready to launch missions for the agency’s Artemis program. The team is working on Test 7.

The final Green Run test, hot-fire, will see the core stage’s four RS-25 engines burn on the test stand for up to eight minutes, generating 1.6 million pounds of thrust (over 700,000 kilograms) as they will at liftoff. The excitement of feeling the rumble of those engines after working toward it for more than eight years will be a thrill for Wright similar to racing.

Wright races about five times a year on tracks across the United States, including Daytona International Speedway and Indianapolis Motor Speedway, with his RocketHam Racing team.

“I enjoy just being able to drive fast on the track in a very safe environment and find the limits of my car,” Wright said. “When you couple that with the competition of racing head to head with other cars, it’s an adrenaline rush.”

Wright has been a driving instructor for 10 years, showing drivers of BMWs and Porsches how to drive on a racetrack. He also performs mechanical work on his 1995 BMW 325i race car — a skill he learned growing up working on the lawn mower and family cars with his twin older brothers.

Majoring in mechanical engineering at the University of Alabama in Huntsville seemed a natural fit. After graduation, he joined Boeing in 1987, starting with 15 years on the Spacelab program and then management of several U.S. Department of Defense programs. As a designer and project engineer, he led hardware development for several International Space Station missions.

“Knowing that hardware I helped put on the space station is flying around Earth today is such a pleasure,” Wright said.

But being part of SLS Green Run has been one of Wright’s most rewarding experiences, especially seeing the dedication and commitment of the teams who, like himself, are often away from their families to be on-site at Stennis.

Wright, who has been away from his wife, two children and grandson in Huntsville, said people across Boeing are assisting with the testing. About 60 console operators from Boeing, NASA and engine supplier Aerojet Rocketdyne will perform the hot-fire test.

The team has been training and conducting simulations for more than a year. Some have previous launch experience or were involved early in the SLS design and build.

“It’s comforting to me to know they have that experience when we get ready to light this rocket,” Wright said.

Wright knows SLS test completion, delivery and launch will be defining moments for him and the team.

“That’s what sustains you — knowing one of these days SLS will fly to the moon and possibly to Mars and help set up a Gateway beyond the moon,” Wright said. “Knowing I played a significant role in getting us there is going to be a career highlight for me.”

The Space Launch System core stage is undergoing Green Run, a series of tests that validate the design and ensure it and future core stages will be ready to launch missions for NASA’s Artemis program. This photo was taken before Boeing implemented COVID-19 pandemic safeguards.