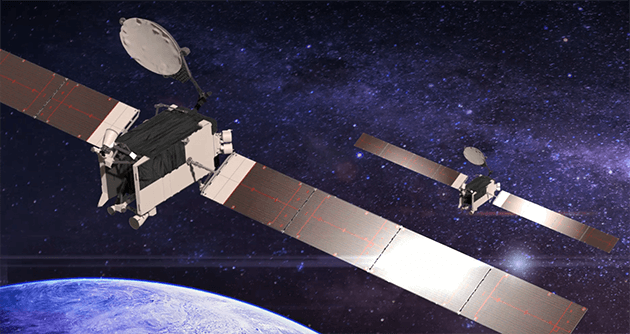 The factory is almost full at Boeing’s Satellite Systems facility in El Segundo, California. Coming off of one of the most successful sales periods in recent years for the Commercial Satellites business, Boeing has 16 commercial satellites moving through various phases of development.

Two of these, a pair of 702SP (small platform) satellites are being designed, tested and built at an unprecedented rate. Satellite operator SES contracted for these two satellites, named SES-20 and SES-21, last May and the team recently completed its Critical Design Review, with no critical issues identified.

Choosing an achievable execution plan with the customer, using existing inventory and engaging the supply chain early has allowed the team to simplify and standardize design work, reduce risk and, ultimately, clear the way for high-velocity production of the twin satellites.

“The team approached this program with agility and efficiency in mind from the onset, recognizing our commitment to deliver quality products in time to meet our customer’s critical schedule milestones,” said Ryan Reid, President, Boeing Commercial Satellite Systems International.

In 2022, the two satellites will be stacked on a single rocket and launched to geostationary orbit, where they’ll be used to clear 300 MHz of the C-band spectrum to to help enable 5G migration across the United States.. The SES-20 and SES-21 satellites are part of the U.S. Federal Communication Commission’s effort to clear prime operating spectrum for U.S.-based 5G wireless operators. The effort is part of the FCC’s 5G FAST plan, a comprehensive strategy to promote American leadership in 5G.

“I’m so proud of this team’s commitment for achieving an early architectural baseline, and progress to date in production of these two spacecraft,” said Jim Peterka, Boeing Program Manager. “We have a great partnership with our customer SES and being tapped to design, build and launch these two satellites means our customer has confidence in us to execute and meet our schedule commitments.”

Christophe De Hauwer, chief Strategy & Development officer at SES, said: “We are thrilled that the Critical Design Review of the satellites built by Boeing has been successfully concluded. With partners such as Boeing who understand the importance of delivering these satellites on schedule, we remain confident that we will be able to meet the FCC’s timeline of clearing the needed C-band spectrum and enabling the delivery of 5G networks across the U.S.”

Boeing also has partnered with SES to build 11 medium Earth orbit, or MEO, satellites for its next-generation constellation of satellites operating in medium Earth orbit — 5,000 miles (8,000 kilometers) away from Earth. The O3b mPOWER system, when launched, is capable of delivering connectivity services ranging from 50 Mbps to multiple gigabits per second to telecommunications, maritime, aeronautical and energy, as well as governments and institutions across the world. The first batch of O3b mPOWER satellites is scheduled for launch at the end of this year.