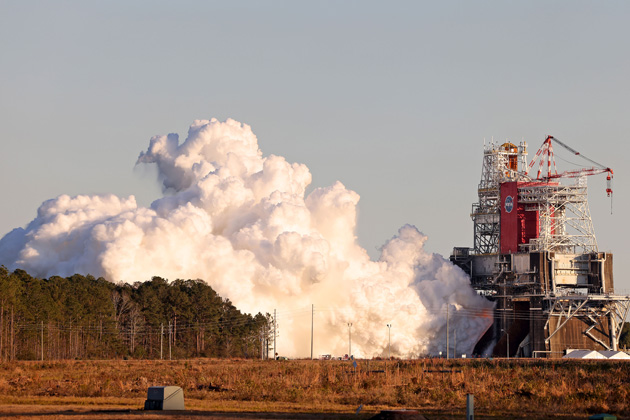 The NASA Space Launch System Artemis I core stage’s fueling and pressurization tests on Jan. 16 ended with a minutelong firing of the Boeing-built stage’s four Aerojet Rocketdyne RS-25 engines. Post-test inspections showed the hardware and the B-2 test stand are in excellent condition.

NASA on January 29 said that the agency, Boeing and Aerojet Rocketdyne will put the first Space Launch System, or SLS, core stage through a second hot fire test at Stennis Space Center in Mississippi.

The core stage’s fueling and pressurization tests on January 16 ended with a minute-long firing of the Boeing-built stage’s four Aerojet Rocketdyne RS-25 engines, less than the roughly four minutes needed for significant data collection and the eight minutes of an entire launch and ascent sequence.

The test team determined that the early shutdown was triggered by test parameters that were intentionally conservative to ensure the safety of the core stage during the test. The core stage hardware was inspected and found to be in excellent condition.

Boeing presented its post-test analysis to NASA last week, and NASA decided to complete the hot fire test as early as the fourth week of February.

“Running a longer hot fire is the right thing to do for our customer and for the astronauts who will fly future SLS rockets,” said John Shannon, SLS vice president and program manager for Boeing. “Doing so will not add significant risk to this Artemis I flight hardware, while providing important data to support the upcoming launch and the certification of all future core stages.”

The team is continuing to analyze data from the January 16 test, drying and refurbishing the engines, and making minor repairs to the stage’s thermal protection system. Engineers are also updating the conservative control logic parameters. The team has already repaired a faulty electrical harness that resulted in a notification of a Major Component Failure on Engine 4. This was an instrumentation issue that did not affect the engine’s performance and did not contribute to ending the first hot fire early.

“Conducting a second hot fire test will allow the team to repeat operations from the first test and obtain data on how the core stage and engines perform over a longer period that simulates more launch and ascent activities,” said Mark Nappi, SLS Green Run test lead for Boeing.

Upon completion of this last Green Run test, the core stage will be refurbished and shipped to Kennedy Space Center in Florida for integration. It is destined to launch an uncrewed Orion spacecraft on the Artemis I mission around the moon.