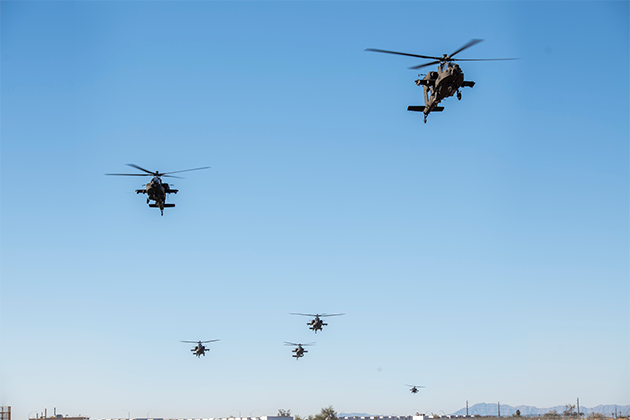 From the AH-64A in 1984 to today’s AH-64E Version 6, or v6, one thing about the Apache hasn’t changed: its reputation as the world’s most advanced and proven attack helicopter.

In January, the latest upgrade to the Apache’s renowned airframe — the AH-64E v6 — joined the 1-229th Attack Reconnaissance Battalion at Joint Base Lewis-McChord (JBLM) in Washington state. This represents the first operational unit to receive the next generation of the Apache.

Chief Warrant Officer 2 Logan Featherston, upon receiving the AH-64E v6 at JBLM, commented that “several of the software changes overall make the system more intuitive, saving time and effort, which allows me and my peers to spend more energy and time focused outside and on the bigger picture of where the aircraft is in time and space.”

The upgrades that come with the Version 6 Apache further enhance the aircraft’s lethality, survivability and connectivity. These include:

As Boeing and the U.S. Army look to invest in next-generation technologies, the Apache brings affordable Modular Open Systems Architecture capability to dominate the 2035 Multi-Domain Operations battlefield. Boeing’s track record of delivering quantum leaps in capability is proof that the Apache will continue to meet and exceed these elements better than any attack helicopter in the world and remain ahead of current and near-peer threats into the future.