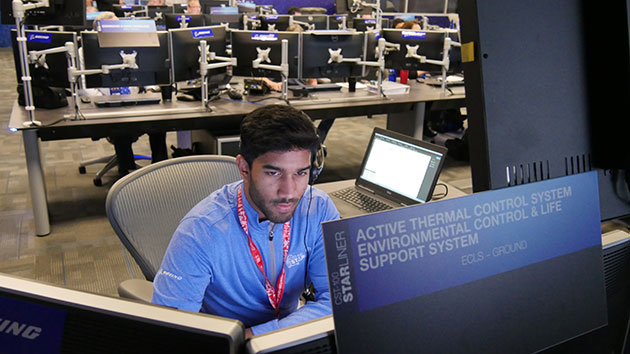 From inside the Boeing Mission Control Center, Shuraja “Shu” Manuweera monitors the historic landing of the CST-100 Starliner on Dec. 22, 2019.

Growing up on a small island in South Asia, Shuraja Manuweera never pictured himself helping to build a vehicle that sends humans into space.

In his home country of Sri Lanka, Manuweera, who goes by Shu, said the opportunities were limited.

“It’s a country with a rich history and culture, but there are fewer opportunities if you want to go into the STEM (science, technology, engineering and math) fields,” said Manuweera, a CST-100 Starliner test engineer on the Commercial Crew Program at Kennedy Space Center in Florida. “Back then, space didn’t even cross my mind. When I take a moment to reflect on where I am now, I’m very thankful for the opportunities I’ve been given.”

His parents, who both have degrees in chemistry from U.S. colleges, wanted to give back to their country and start a family in Sri Lanka so their children could learn the culture and traditions. But Manuweera said his parents’ goal was always for him and his older sister to go to college and live in America.

“From day one, that was their plan so they could provide me with the best opportunities. I’m very thankful to them,” Manuweera said.

Manuweera spent most of this childhood in Sri Lanka attending the same school until his family moved to Switzerland when he was 15, after his dad started working for the United Nations on environmental programs and regulations.

For Manuweera, there was a culture shock coming to western civilization in Switzerland. But he adjusted and after graduating came to the U.S. to study and live with his sister, who has degrees in biomedical engineering. He majored in mechanical engineering at Rutgers University in New Jersey.

Not long after graduating with his bachelor’s degree and an internship in Switzerland working on reducing mercury emissions throughout the world, he applied for a job with Boeing for the Starliner program.

Hired as a test fluids engineer in March 2018, he conducts leak checks and functional tests on the Environmental Control and Life Support Systems and its components, which includes everything from thermal control systems to the regulation of air in the crew module. He most recently worked on a series of functional tests on a valve that fills the airbags prior to landing.

He was recognized in January for the testing he has done on the spacecraft.

“Shu has been an outstanding member of our Fluids Team.  He is always looking for new methods of performance test and new means for data collection using state-of-the-art instrumentation and automation of test rather than human intervention,” said Phil Lintereur, Starliner Test and Fluid Systems senior manager. “He has grown into a well-respected engineer and his diverse skills have helped us deliver on very complex, mission-critical requirements.”

Prior to launch, Manuweera serves on the ground team that assesses the spacecraft while it is mated on top of the Atlas V rocket. He works to ensure the ground cooling unit is cooling the vehicle and monitors the spacecraft’s Environmental Control and Life Support System, which includes everything from the circulation system to the emergency recovery and landing bag systems.

He was in the Boeing Mission Control Room the day prior to Starliner’s first launch in 2019 and will be there again for the second Orbital Flight Test. He’s looking forward to watching future launches with his mom on the NASA Causeway.

“It’s challenging to build a spacecraft, but when I saw the launch I wanted to do it all over again,” Manuweera said. “It was amazing.”

He enjoys the camaraderie of everyone on the factory floor and working toward a new frontier of commercial human spaceflight.

“I get to work on equipment I would dream about as an engineering student, and the technical challenges are very interesting.” Manuweera said. “But the end product is the most rewarding thing you can see as an engineer.”

Manuweera was always interested in working with his hands, whether helping his dad fix the family car in Sri Lanka or building computers from scratch, which he still does today.

When he’s not also building replicas of cars, transmissions and gear boxes out of LEGO Technic, he’s playing the guitar in his spare time, a skill he also picked up from his dad.

Being away from his parents, who are still in Switzerland, has not been easy — especially during the global pandemic. He’s looking forward to his dad retiring next year and his parents moving to Florida.

“I wouldn’t be here if it wasn’t for my family. They’ve been an amazing support structure for me. Everything from nurturing me and allowing me to come to the (U.S.) all the way up to teaching me about chemistry growing up and helping with tough times in college,” Manuweera said. “Our family has been separated for a while, but still our connection is stronger than ever. No matter where I was, my parents and my sister were always there for me and believed in me.” 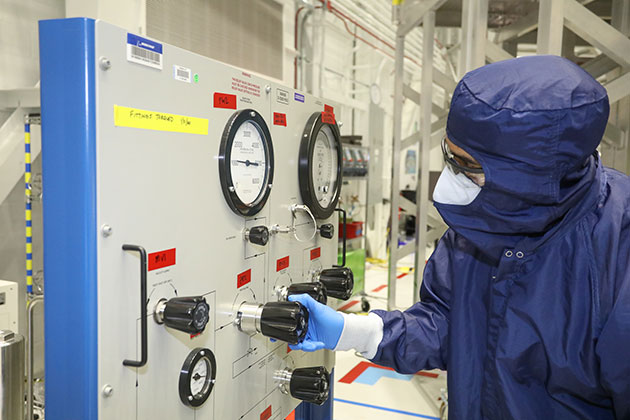 Shuraja “Shu” Manuweera configures the pressure regulation panel prior to testing in the Commercial Crew and Cargo Processing Facility on Feb. 3, 2021.