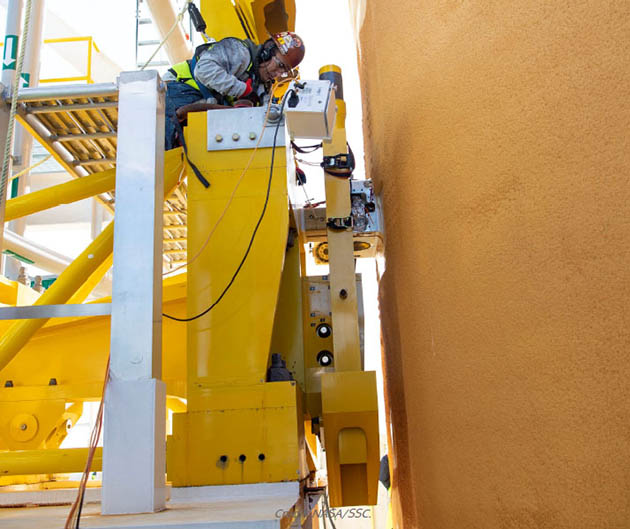 A technician installs the structure that helped restrain the NASA Space Launch System core stage in Stennis Space Center’s B-2 Test Stand when 1.6 million pounds (over 700,000 kilograms) of thrust was produced during hot fire testing in January and March.

Collaboration with NASA and a key supplier helped Boeing engineers meet the challenge of restraining 2.7 million pounds of rocket hardware activated for liftoff by 1.6 million pounds (over 700,000 kilograms) of thrust.

As Boeing and NASA teams prepared for the second Space Launch System, or SLS, core stage hot fire test on March 18, final checks included the mechanism that kept the massive propulsion vehicle in its place as four RS-25 engines ignited to simulate launch.

“It was impressive to witness the application of millions of pounds of load in all three directions/axes simultaneously and watch the design properly function,” said Jacob McGee, Boeing SLS structural engineer, referring to the first hot fire test in January. Boeing designed a three-axis system of restraints that leverages the B-2 test stand’s strength in key areas to withstand the force of thrust, and prevent liftoff. “We developed the design, then pulled in one of our suppliers to build both a test rig and the actual tie-down structure,” said Robert Chall, the Boeing Supply Chain manager responsible for coordinating project requirements.

Boeing partnered with D-J Engineering of Augusta, Kansas, to build the structure, and NASA worked with the Boeing team to modify the B-2 stand at Stennis Space Center for testing, incorporating the tie-down design.

“There are nuts weighing 50 pounds (23 kilograms) each in the design, which gives you an idea of the massive size of the tie-down structure,” said Chall. “They’re part of testing the SLS flight article that will launch on the Artemis I mission later this year, so nothing was left to chance.”

The tie-down apparatus absorbs the thrust pressure and transfers it to the more substantial B-2 test stand itself.

“We tested it to 1.25 times the max loads, but it was impressive to watch the design work properly during engine ignition,” said McGee.

The tie-down fixtures are mounted on the core stage intertank, where the solid rocket boosters, or SRBs, will be mounted for launch once the core stage ships to Kennedy Space Center. Each SRB exerts 3.6 million pounds (over 1.6 million kilograms) of thrust during launch, so the intertank area is the optimal location for the Green Run tie-downs.

“It’s all about leverage and control,” said Chall.

With Green Run complete, the first SLS core stage will ship to Kennedy for integration with other elements of the Artemis I mission, which will send an uncrewed Orion spacecraft around the moon and back. Boeing is producing core stages for follow-on missions at the NASA Michoud Assembly Facility in New Orleans.

D-J Engineering is one of 350 companies that work with Boeing to build and test the Artemis core and upper stages. 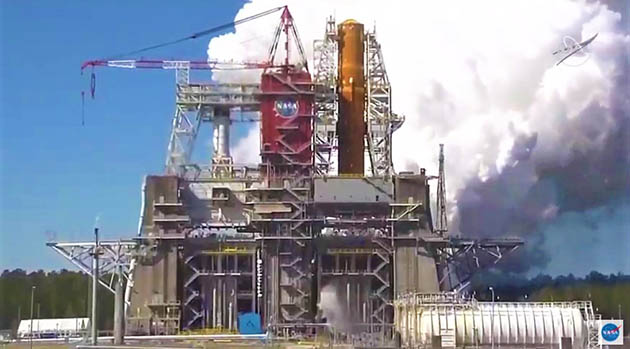 Steam from water suppressants streams from the B-2 Test Stand at NASA’s Stennis Space Center during a test fire of the NASA Space Launch System core stage on March 18. 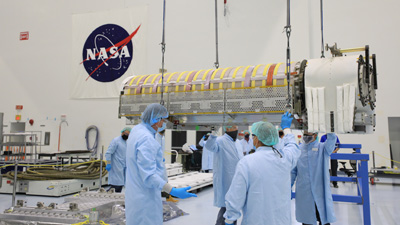