The core stage of the rocket that will launch the first crewed lunar mission in 50 years – Artemis II – is coming together at NASA’s Michoud Assembly Facility in New Orleans.

Boeing teams at Michoud began “forward join” operations in mid-March, which mates the top half of the Space Launch System, or SLS, core stage elements: the liquid oxygen tank, forward skirt and intertank. Meanwhile, the liquid hydrogen (LH2) tank has been primed for application of thermal protection spray, which will protect it from harsh conditions at launch and in deep space.

The LH2 tank will then be joined with the engine section and “boat tail,” which covers the four RS-25 engines to make up the bottom half of the rocket. Finally, the top and bottom halves will be connected in a “final join” to form the completed core stage structure. 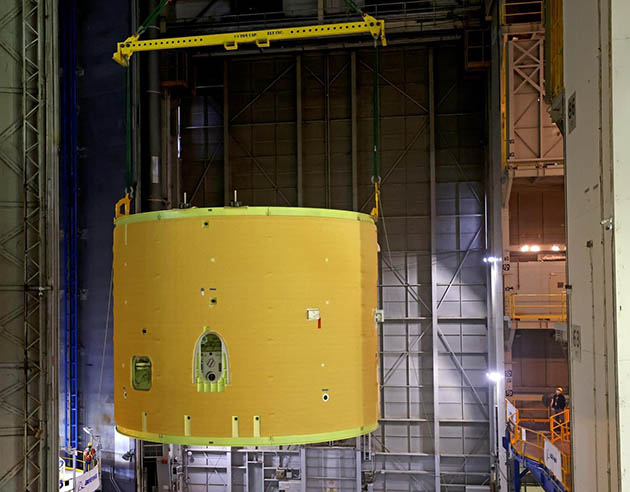 Boeing builds SLS core stages and Lockheed Martin builds the Orion spacecraft at Michoud, while solid rocket boosters and engines are manufactured by Northrop Grumman and Aerojet Rocketdyne in Utah and Mississippi, respectively. The engines will arrive at Michoud to be integrated with the core stage engine section, while the booster motors will ship directly to Kennedy Space Center in Florida. United Launch Alliance, in partnership with Boeing, is building the in-space stage, the Interim Cryogenic Propulsion Stage, in Alabama.

It all comes together as a 322-foot-tall SLS Block I rocket that can lift 27 metric tons of payload to lunar orbit.

“Watching the first Boeing-built core stage successfully fire up at Stennis Space Center earlier this month showed the team the kind of power that will launch humans to deep space again,” said Sturgeon. “That inspires us all and keeps us fully focused on the Artemis II build.”

Artemis II is the first crewed mission for Orion, to be launched aboard SLS in 2023 for a lunar flyby test. SLS is the only rocket capable of lifting the Orion crew capsule out of low Earth orbit to place it on orbit around the Moon.

The estimated 21-day mission will test Orion’s life support systems with four astronauts aboard as the SLS proves out integrated system performance, crew interfaces, and navigation and guidance systems. SLS will orbit the Earth twice, firing its engines to build up enough speed to achieve lunar orbit, without attempting touchdown. 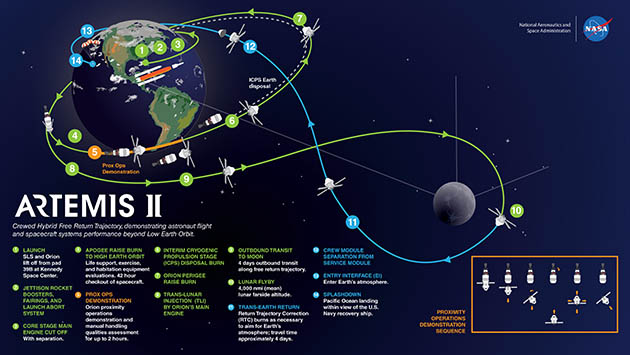 A map of the Artemis II crewed lunar flyby mission.

A successful flight will put NASA, its industry partners, and the world on course for landing astronauts on the lunar surface with Artemis III. Core stage hardware for that mission is also in work at Michoud today.