A few miles off the beaches of Destin, Florida, inside hangar 102 at Eglin Air Force Base a curtain dropped revealing the new F-15EX to cheers and applause.

“Today, the U.S. Air Force ushers in a new aircraft for a new era — the F-15EX. This is the most powerful, most advanced and most agile F-15 to date,” Boeing Defense, Space & Security President and CEO Leanne Caret told a crowd of senior Air Force officials and Boeing teammates. “If you don’t mind, I might use a slogan I heard growing up. This isn’t your grandma’s Buick.”

“I would say this day has been a long time coming, but it has actually come to fruition very fast from an acquisition perspective,” said Lt. Gen. Duke Richardson, Office of the Assistant Secretary of the Air Force for the Acquisition, Technology Logistics Military Deputy. “In keeping with Chief of Staff Brown’s direction to accelerate change, we aggressively worked with Boeing to accelerate the delivery of two F-15EX aircraft from the normal 39-month lead time to just nine months after contract award.”

The Air Force also revealed a new name for the F-15EX — the Eagle II.

The F-15EX is a ready-now replacement for the F-15C that includes best-in-class payload, range and speed, and an all-new digital infrastructure. It not only brings digital fly-by-wire controls, an advanced cockpit system with glass displays and state-of-the-art electronic weapon systems, but it also now includes almost three miles (4.8 kilometers) of high-speed data cable to ensure it evolves ahead of the threat.

In July 2020, the Air Force awarded Boeing an Indefinite Delivery, Indefinite Quantity contract for up to 200 F-15EXs. The service has announced initial basing locations in Florida and Oregon. 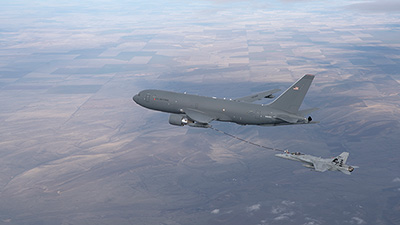