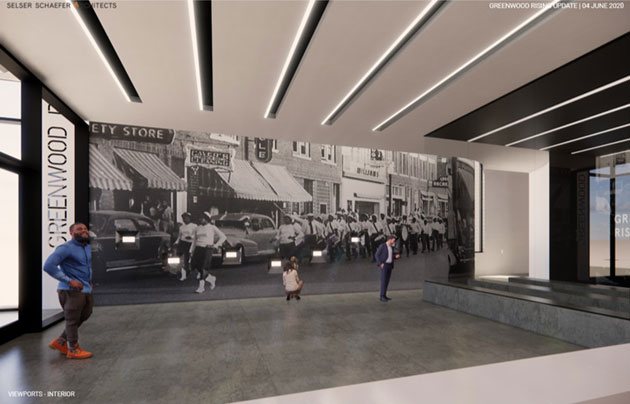 A rendering of the entry of Greenwood Rising

David Eboh moved to Oklahoma City in 2018 to join Boeing as a software engineer, and as he started to get to know his new city, he learned for the first time about the 1921 Tulsa Race Massacre. It surprised him to find out that many other people in his community knew very little about it as well.

“I was shocked — why didn’t we learn about this in school?” Eboh said. “I realized there are a lot of other people who are in the same position; I just didn’t know a lot about it.”

This year marks 100 years since the Tulsa Race Massacre, during which white rioters looted and set fire to homes and businesses in the Greenwood District of Tulsa, which was one of the most prominent concentrations of African-American businesses in the United States at that time. Historians believe as many as 300 people were killed during the violence that lasted 24 hours.

Next month, a new history center called Greenwood Rising — a project of the 1921 Tulsa Race Massacre Centennial Commission — will open in Tulsa to commemorate the massacre and honor the legacy of the Greenwood District.

Boeing, one of the first corporate partners for Greenwood Rising, invested $500,000 to support two of the history center’s key programs through 2026: the Youth Race & Leadership Forum and the Greenwood Rising XR Learning platform.

“Boeing is proud to partner with Greenwood Rising to help educate us all about this horrible and tragic event in our nation’s history. Through our investment, we will continue the conversation about how to improve racial equity in the United States and to empower the next generation — both here and abroad — to be part of that change,” said Cheri Carter, vice president of Boeing Global Engagement. “We are committed to being part of the solution — to support programs like Greenwood Rising that are making positive, lasting changes in our communities.”

Eboh, who is serving as the president of the Oklahoma chapter of the Black Boeing Employees Association (BBEA) was excited to learn about the investment.

“Having this museum will be very beneficial to the entirety of Oklahoma as well as countless others who don’t know the full history,” Eboh said. “I’m glad Boeing has made this investment because it is important to the community, and I want to see Boeing serving the community.”

The second program funded by Boeing is the annual Youth Race & Leadership Forum, a partnership with the Oklahoma Center for Community and Justice (OCCJ) during which students learn about race and how they can advocate for positive change for themselves and their communities.

“We have to be invested and be involved in the community, and I’m looking forward to getting involved with the history center and exploring how BBEA can, too,” said Eboh. “There are many ways to show we care as a company, and an investment like this is one of those ways.” 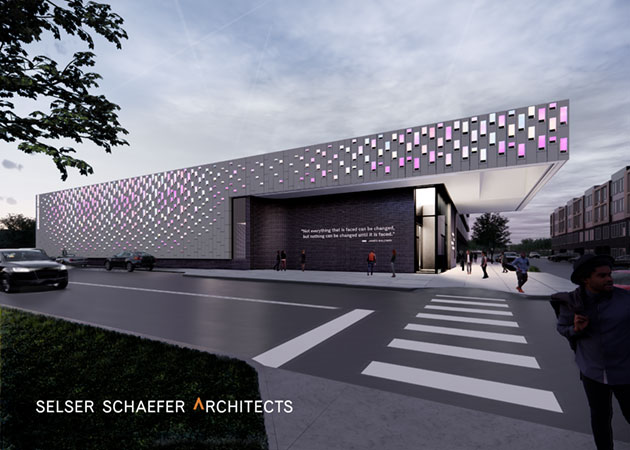 A rendering of the exterior of Greenwood Rising