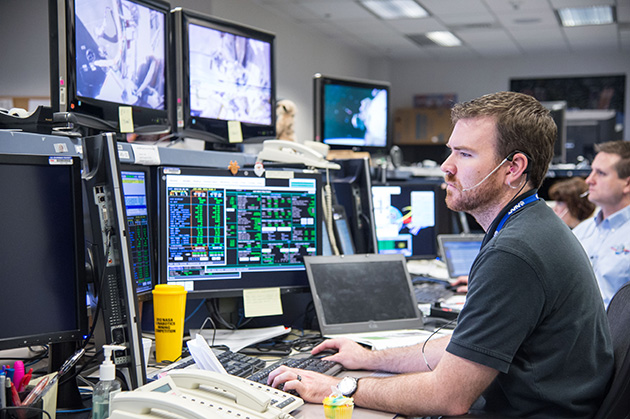 Boeing's James Dickson works at a console in the Mission Evaluation Room at NASA's Mission Control Center in Houston.

Now that a pair of new solar arrays has been built by his colleagues and parked at the International Space Station, or ISS, it’s time for James Dickson and other Houston-based spaceflight engineers to help get them bolted in place, plugged in and unrolled.

The installation is an impressive engineering project, Dickson said. It’s the first in a series of Extra Vehicular Activities, or EVAs, that will see six new arrays added to the ISS by 2023. Twice as powerful and half the size of the original arrays, the new structures are woven with stronger, more efficient solar cells from Boeing Spectrolab. The cells and blankets are mounted between two beams from Redwire that are rolled flat for launch and will unfurl using their own energy rather than a motor.

“This will definitely be intense,” Dickson said. “It’s more on the level of the original ISS assembly activities than the maintenance EVAs we’ve done since then. We’re flying hardware we’ve never flown before.”

Dickson’s team has analyzed every aspect of the spacewalk installation plan with NASA. They will provide real-time engineering support to the crew and flight controllers.

It’s all being done to set up the orbiting laboratory with a robust new energy source to enable more scientific capabilities and to power additional commercial modules later this decade.

Astronauts Shane Kimbrough and Thomas Pesquet will take their work outside the ISS during spacewalks on Wednesday and Sunday to set up the new arrays and watch them unfurl. The event will mark one of the biggest changes to the station’s appearance since 2011.

“We’re adding major parts to ISS that we didn’t have before,” said Dickson. “It changes the way we rotate the arrays and the way we fly.”

NASA flight controllers at Mission Control will work directly with the astronauts throughout each of the 6.5-hour spacewalks. The astronauts will also be assisted by the 55-foot-long ISS robotic arm and the mobile transporter, a specialized cart that moves along the ISS truss to get equipment into position.

Boeing has provided EVA support throughout the operational life of the ISS, going back to 1998. 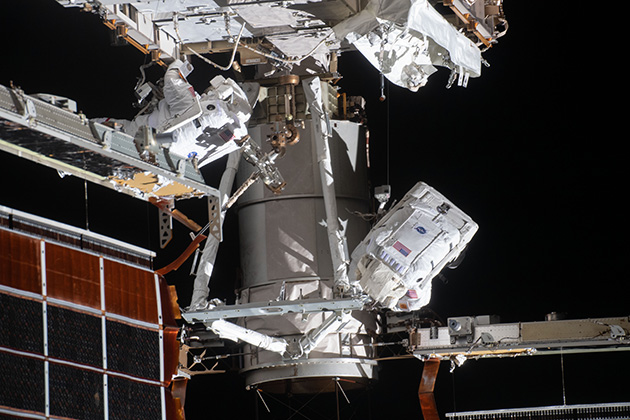 NASA astronauts install a mounting structure on the International Space Station earlier this year in preparation for the upcoming installation of two new Boeing-provided solar arrays.