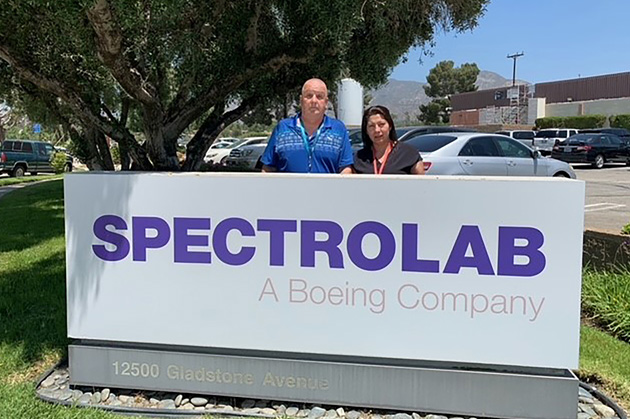 Veronica Hoffman and her husband, Chris, work as assemblers at Spectrolab’s facility in Southern California.

The arrival in orbit of two new solar arrays for the International Space Station will be known for adding a new power source to the orbiting laboratory. But for a member of the Boeing Spectrolab team that made a new generation of solar cells for the arrays, the coming installation will complete a remarkable goal that would not have been possible for her before.

For 10 years, Veronica Hoffman built fish tanks in Southern California before she received an opportunity to move to Spectrolab, a Boeing company based in Sylmar, California that produced the XTJ Prime solar cells that populate the arrays. “I love the ocean, and I have always been fascinated by fish,” Hoffman said. “I even have a favorite fish, the Nemo.”

However, Hoffman said the opportunity to work with a company that builds products launched in space was too good to pass up.

Hoffman has now worked at Spectrolab for 14 years and served as panel manufacturing lead assembler on Spectrolab’s ISS program from beginning to end. She has performed almost every task on the program, from bonding the cells to finishing the solar power modules for the arrays. Spectrolab built more than 1,150 solar power modules and more than 55,000 solar cells for six new arrays.

Spectrolab is also a family affair for Hoffman, who is originally from Mexico. Her husband, Chris, also works at Spectrolab as an assembler and also helped package the arrays for shipment. “We both feel so fortunate to work on products that connect people around the world,” she said. “We feel privileged to be a part of something that is helping to make the world a better place, so that we all have something to leave to our children and grandchildren.”

The new arrays will together produce more than 120 kilowatts of electricity using the sun’s rays, enough to power more than 40 average U.S. homes. Combined with the eight original, larger arrays, this advanced hardware will provide a 20 to 30 percent increase in power, helping to maximize the station’s capabilities for years to come. The arrays will provide ISS with electricity to sustain its systems and equipment, plus augment the electricity available to continue a wide variety of public and private experiments and research in the station’s unique microgravity environment.

“The new solar cells are built to withstand the harsh environment of space,” said Hoffman. “Unlike terrestrial solar cells, ISS cells are thicker and more durable.” The solar arrays are half the size of the previous arrays, but are twice as powerful because of advances in solar cell technology.

Spectrolab also produced the station’s original solar cells, as well as the solar cells tested on the prototype Roll-Out Solar Array, or iROSA, tested aboard ISS in 2017. The remaining four arrays are expected to launch to the ISS by 2023.

“I am very proud of the work that I do every day here at Spectrolab,” she said. “I wish my grandmother could be here to see the work that I am doing for the International Space Station. It is the job of a lifetime.”

By Addrian Brooks and Steven Siceloff 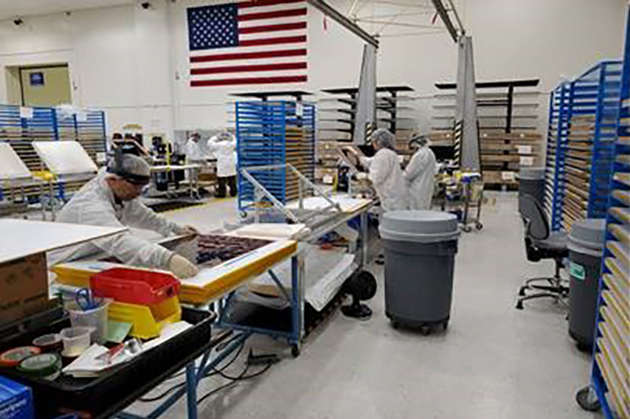 The solar cells for a new set of International Space Station arrays were manufactured at the Spectrolab facility and assembled onto lightweight array blankets. The arrays will be installed on the ISS beginning June 16.