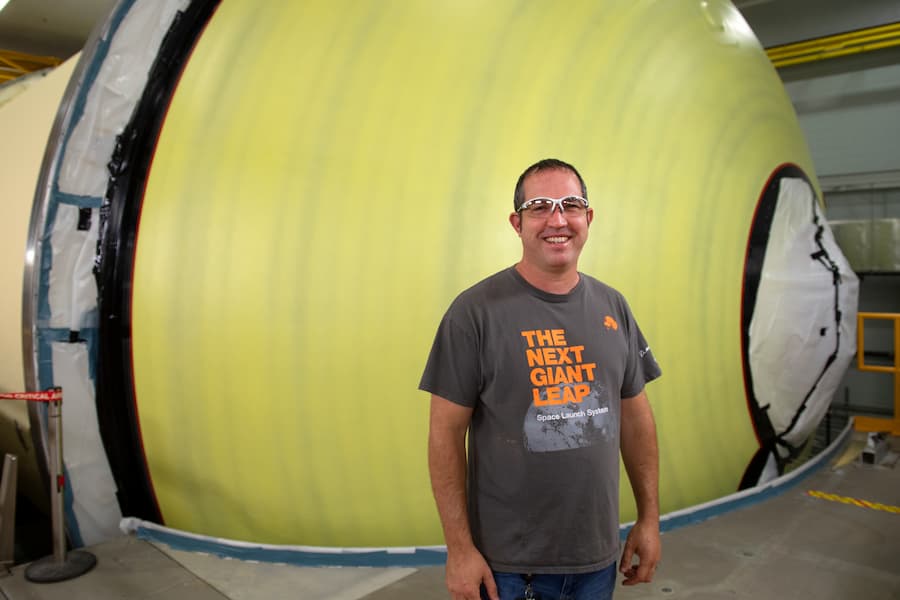 The coating that gives NASA Space Launch System, or SLS, rockets their signature yellow-to-orange hue is Thermal Protection System, or TPS, spray foam. It manages the temperatures of the rocket’s 733,000 gallons of liquid hydrogen and liquid oxygen propellants at -423° F and -297° F, respectively, in the extreme environments of readiness and launch.

Boeing crews are applying TPS to SLS Core Stage 2 this week at NASA’s Michoud Assembly Facility in New Orleans. It’s happening faster and more efficiently than the process for Core Stage 1, thanks to a new innovation.

The foam is sprayed as the heated hardware turns like a rotisserie in a unique, temperature-controlled space Boeing worked with NASA to design and build.

“No one has ever automated a single spray event of a TPS for an article as big as the liquid hydrogen tank,” said Brian Jeansonne, Boeing Integrated Product Team leader for Core Stage Thermal Protection. “It’s equivalent to spraying four SLS liquid oxygen tanks back to back.”

Boeing technicians monitor the roughly 100-minute process from an adjacent area via camera and respond to any issues.

For core stage 2, the team innovated further to automate spray of the tank domes, which previously had to be sprayed manually because of the domes’ complex geometry.

“We’ve been able to save 12 days of critical path for the liquid hydrogen tank with this change, and gain more consistency of application as well,” Jeansonne added. As a 20-year veteran of TPS work, he’s training earlier-career colleagues to look for and raise every opportunity to improve safety, quality and cost. 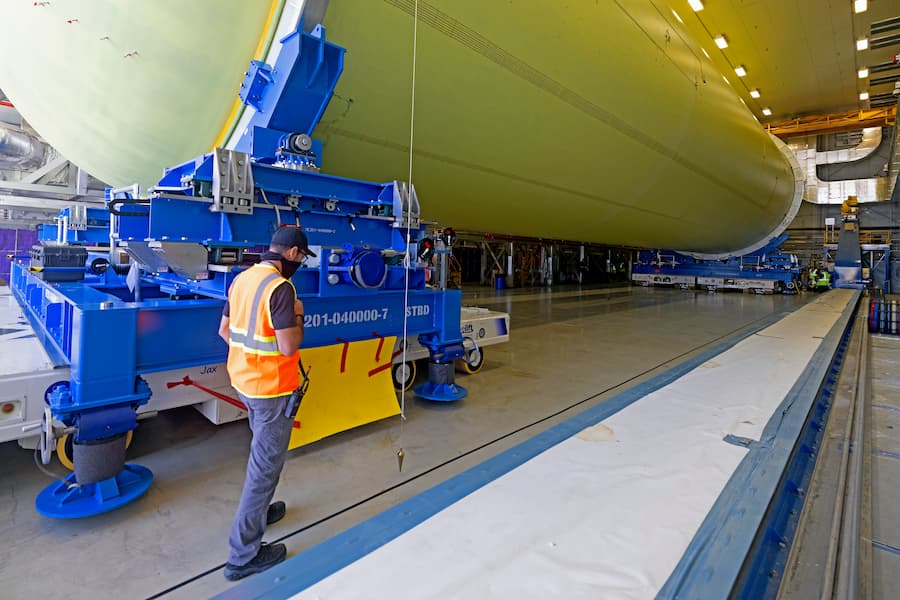 The liquid hydrogen tank of the second NASA Space Launch System core stage is installed in the spray cell at NASA’s Michoud Assembly Facility for application of its thermal protection foam.

Born and raised in nearby Pearl River, Louisiana, Jeansonne attended the University of New Orleans for his mechanical engineering degree and went straight to the space shuttle program, working on thermal protection for the shuttle external tanks built at Michoud.

“It’s critical work in a growing, interesting industry, and TPS technology is always evolving, with new development like SLS taking it to a new level,” Jeansonne said. “So I’m always learning.”

Besides providing protection from wide temperature differences during propellant loading, engine firing and launch, the flexible, protective TPS barrier stays bonded to the tanks as those temperatures make them contract and expand.

The foam performed as designed during recent Green Run hot fire testing of the first core stage – a simulation with all four engines firing just as they would during launch. Some areas of the TPS were scorched from the hot fire, as expected, and those areas are being refurbished at NASA’s Kennedy Space Center in Florida as the core stage begins to be stacked with the rest of the rocket for launch on the Artemis I lunar mission.

Thermal protection is also used in innovative ways on smaller sections of the core stage that can’t be sprayed. These areas, such as components inside the engine section and intertank, have custom-fitted, 3D printed molds. The molds are assembled around the complex shapes and filled with pour foam; the molds are removed after the pour foam has cured. Other areas are hand-sprayed, such as the flange interfaces between each section of the core stage.

“We custom-molded foam for a few parts for the space shuttle, but you couldn’t make changes and it could take weeks to fabricate the composite molds,” Jeansonne said. “With 3D printing, we can mold more than 300 pieces, because we can easily make more complex geometries and incorporate changes quicker. If you can design it on the computer, you can print it.”

The foam itself also regularly evolves, driven by advances in materials technologies and Environmental Protection Agency guidance. Rocket builders seek a polyurethane foam that is lightweight, yet strong enough to protect the hardware, and flexible enough to maintain its protective seal under temperature extremes.