Boeing’s longtime support of the special night is a perfect fit, as veterans make up nearly 15% of Boeing’s workforce in Washington state. One of those veterans – Timothy Krambs -- took the mound to throw out the ceremonial first pitch.

Krambs, an Armed Forces veteran and Boeing employee, served in the U.S. Army for nearly 25 years, which included tours in the Middle East, Central Asia and Europe. He joined Boeing just over a year ago through the Hiring Our Heroes corporate fellowship program. Today, Timothy works for Boeing Defense, Space & Security as a lead planner and scheduler.

“Honestly I’m just honored to be here,” said Krambs, who went on to share his thoughts on Boeing’s support for veterans. “I’m just ecstatic that they are hiring veterans, in my capacity – in any capacity – coming out of the military service. I think there is a good spread of veterans throughout the services.”

To top off the night, Boeing also handed out special Mariners military caps to 15,000 fans. It’s just one small way to show our thanks and spread the word about the vital contributions of our service members. 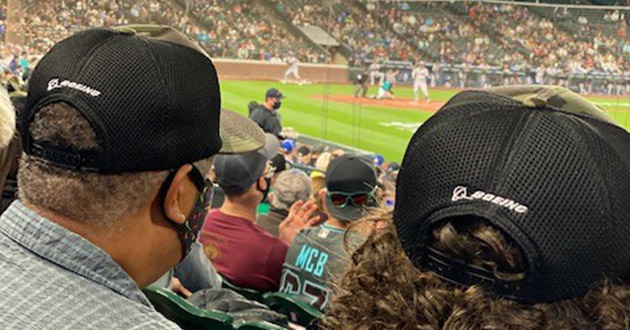