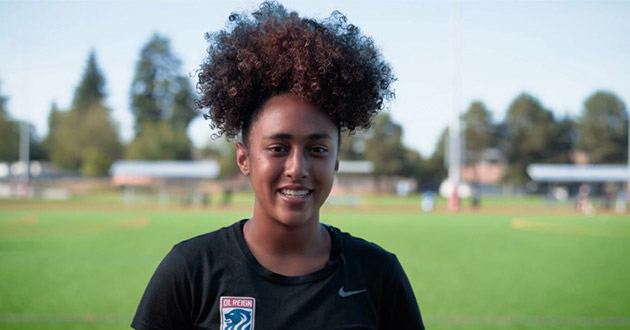 Avah Snodgrass is one of this year’s OL Reign Academy players to receive a Boeing Scholarship.

The program, launched last year, was developed in an effort to help address the underrepresentation of girls of color in youth soccer. The scholarships cover OL Reign Academy fees for the recipients for the 2021-2022 season. Based in Tacoma, The OL Reign Academy is an elite training program for female youth soccer players.

“Winning this scholarship means I get to keep playing soccer for OL Reign Academy. It allows me to focus on learning from my coaches and playing with my teammates and overall empowering me to grow as a soccer player and a whole person,” Buck said. “It also makes me feel valued, as an indigenous soccer player. This scholarship gives me the assistance and support to keep playing at a high level and become the role model I wish I had when I was younger.”

“I have multiple dreams when it comes to soccer,” said Snodgrass. “I am going into my first year of high school, which is a completely different pace and level than middle school. I hope to get recognized by colleges by my junior year. My dream colleges are UCLA, Stanford, and Santa Clara. I would love to accomplish my dreams of playing college soccer for a Division I school close to home. Finally, I want to play professional soccer for the U.S National Team or to play for professionally for OL Reign.”

“It means a lot to win a scholarship for the sport that I love to play,” she continued. “I have worked very hard to be where I am and to get recognized means a lot. I love the steps that the OL Reign Academy is taking to make diversity one of its priorities. It means so much to see people like me out on the field, achieving their dreams and showing that people of color can make their dreams come true.”

Enabling those ambitions has been important aspect of providing the scholarships. “For me, the ultimate goal is to play at the highest levels possible, whether that means starting on my varsity team, playing for a Division I university and professionally,” said Buck. “Growing up, I was never able to look up to Indigenous athletes playing soccer at the highest levels possible. It was only when Madison Hammond, the first Native American in the NWSL, joined the league that I was able to have a role model that showed me if I work hard enough, I could play professionally. A dream of mine would be to become the role model I never had as a young child. Seeing Madison Hammond play for OL Reign makes me feel that if I work hard, I can too, and I want to be that role model for others.” 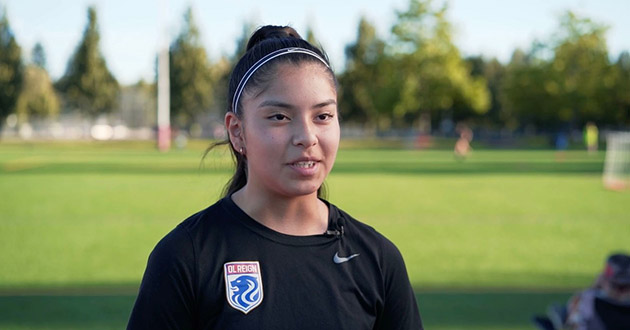 Tatiwyat Buck is one of this year’s OL Reign Academy players to receive a Boeing Scholarship.

“Our partnership with Boeing is much more than their logo on our jerseys,” said Amy Griffin, OL Reign Academy executive director. “Their intentional effort to support the OL Reign Academy with more opportunities for underrepresented female youth players is exceptional.”

“We are proud to support the development of these talented players, as part of our Boeing Scholarships,” said Bill McSherry, vice president of Government Operations at Boeing Commercial Airplanes. “We have a deep commitment to equity and inclusion and look forward to seeing the great things these bright and talented athletes of color will achieve in the future.” 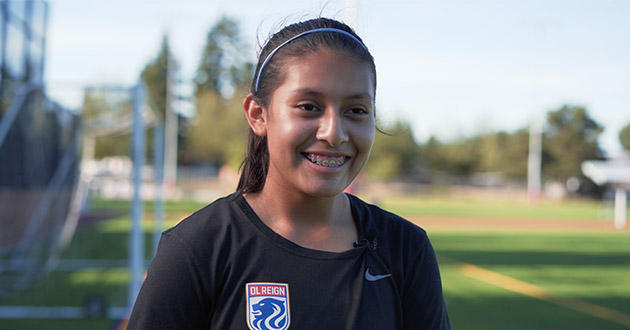 Arianna Ortiz in one of this year’s OL Reign Academy players to receive scholarships.