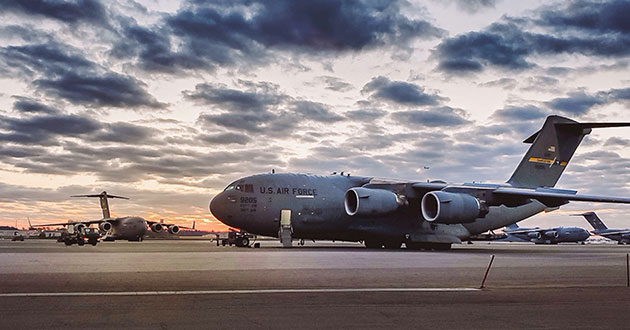 C-17s prepare for the milestone mission at Joint Base Charleston on Jan 15, which has been home for the Globemaster III since the first delivery in 1993. There are 275 C-17s in the global fleet, flying for the United States Air Force and allied nations.

The U.S. Air Force and their partners around the world commemorated the C-17 Globemaster III’s 4 millionth flight hour on January 15, observing the milestone at South Carolina’s Joint Base Charleston (JBC), where Boeing teams have been working in support of airmen and women since the first C-17 was delivered in 1993.

Four million flight hours is equivalent to a single aircraft being airborne for more than 456 years.

Air Force brass, local dignitaries, elected officials and Boeing leaders participated in the event, where two C-17s completed a ceremonial flight and were showered by two fire trucks upon landing in celebration of the many accomplishments the flight represented.

“We are extremely excited and honored to celebrate this historic milestone with the Airmen who made this all possible,” said Col. Jaron Roux, 437th Airlift Wing commander. “Reaching 4 million hours with the C-17 is a testament to the capabilities of our Airmen providing Global Reach and projecting our combat capabilities.”

“This was my first time flying on the C-17 and it was the experience of a lifetime,” Colbert said. “The Boeing team is proud to have designed and built the C-17. Over the course of its lifespan, we’ve worked alongside our customers – both onsite and virtually – to ensure its readiness for all four-million flight hours. Today, that work includes modernization and innovation that will allow our customers to continue fulfilling their important missions for decades to come.”

When a natural disaster strikes, during times of conflict and peace, the C-17 is called into action to deliver essential aid, transport critical equipment, deploy troops, complete aeromedical missions, and defend our national and global interests.

The global C-17 fleet has been at the forefront of the world’s fight against COVID-19, with the U.S. Air Force and international partners flying missions to repatriate citizens, deliver medical supplies and transport patients from some of the most remote areas in the world.

Boeing field service representatives were on the frontlines helping to ensure the success of the customers’ missions with sustainment, training and modernization support. This included just-in-time augmented reality training to ensure the completion of important work despite travel restrictions, and engineering support to enable the safe transport of infected patients.

During the ceremonial flight, a KC-46 Pegasus refueled both C-17s, underscoring the importance of aerial refueling to the C-17’s global reach and the U.S. Air Force’s ability to fulfill their mission. Tim Peters, vice president of Commercial Derivative Aircraft for Boeing Defense, Space and Security, flew on one of the receiving C-17 aircraft.

“The KC-46 has the ability to transport more than 100 tons of fuel and transfer it at the rate of 1,200 gallons per minute – expanding the global reach of any platform it refuels,” said Peters. “As the Globemaster III continues to perform critical missions around the world, the Pegasus stands ready to support.”

With 275 aircraft in the global C-17 fleet, the Globemaster III offers the U.S., United Kingdom, Canada, Australia, India, Kuwait, Qatar, the United Arab Emirates and the multinational Strategic Airlift Capability unmatched airlift capability. Built first by McDonnell Douglas and then by Boeing, the C-17 entered service in 1995 and has ever since provided unmatched global airlift capability.