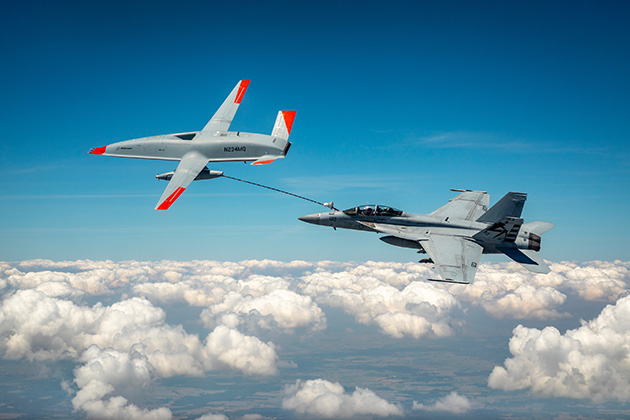 The world is entering an era in which rapidly evolving technology is determining how wars are fought and won. Advances in commercial technology, artificial intelligence, electronic warfare and cyber are being leveraged by new and evolving threats to level the playing field.

The answer to the question of how future missions will be achieved is not a singular new aircraft or weapon, but rather autonomous technologies that extend and connect human capabilities across all domains. Autonomous capabilities are transforming the battlespace of today and tomorrow – enabling warfighters to see, listen and reach farther than ever before so that they can make critical decisions faster. Armed forces around the word see defense autonomy as helping the 21st century warfighter win the future fight.

During a Boeing media briefing on Autonomous Systems at Dubai Air Show, Rick Lemaster, Vice President Middle East, Africa, Turkey & Israel Business Development, outlined how the company is using defense autonomy to help global customers adapt from the solutions of the past and stay ahead of threats with greater agility.

Lemaster explained that the true value of autonomy lies in its ability to help warfighters stay on mission longer, cover more area, provide real-time, actionable information and prioritize resources for the most important actions and decisions. “It’s about understanding the challenges of certain missions, knowing the systems already in place, and having the ability to integrate digitally advanced and flexible autonomous solutions to help make existing systems smarter, missions safer and operations more effective and efficient,” said Lemaster. “Autonomy will define the next 100 years – and Boeing is driving the safe innovation and integration of autonomy to maximize human potential.”

“You may know Boeing best for our commercial and military aircraft, but we’re creating the future of defense autonomy as we speak. Our autonomous offerings are more than designs on paper; we’re building them, testing them under real-world conditions and working with our customers to integrate them into their operations across all domains now,” he added.

The ability to have live, actionable data and persistent situational awareness with defense autonomous systems is critical for supporting maritime security, natural disaster planning and prevention, and economic development. To mitigate threats to economic stability and maritime security challenges, Boeing has a broad range of autonomous capabilities that span seabed to space.

The Wave Glider is the world’s most proven ASV designed and manufactured by Liquid Robotics. Sitting on the surface of the ocean, this low-profile, mobile sensor platform uses acoustic sensors to collect and communicate data in real-time between manned and unmanned systems from the seabed to space. Powered by wave and solar energies, the Wave Glider requires no fuel enabling it to stay on mission 24x7 for several months at a time, providing persistent maritime surveillance and maximizing resources so that operators can act on the data and intelligence received. The Wave Glider is a key component of Boeing’s work to create a seabed-to-space network of manned and unmanned assets that can make existing platforms smarter, missions safer, and operations more efficient.

Boeing’s Echo Voyager, is a pier-launched, modular, long-range XLUUV that is capable of performing as a multi-mission system and playing a pivotal role in future force structure. Whereas traditional unmanned undersea vehicles are limited by the need for a host ship and by communications, payload capacity and endurance factors, Echo Voyager’s advanced autonomy allows it to operate for months at a time without physical human contact and in congested waters. The vehicle is complete with a generous internal and external payload volume and available energy capacity – delivering a more affordable, mission-capable solution over traditional UUVs. At the same time, new sensor and system payloads are rapidly being introduced that could expand the UUV mission set. Boeing has designed and operated manned and unmanned deep sea systems since the 1960s, including Rockwell International legacy systems and U.S. Navy support programs.

Dave Fluker, Insitu’s International Business Development Executive, highlighted the intelligence, surveillance and reconnaissance (ISR) capabilities of Insitu’s unmanned aerial systems (UAS) portfolio including ScanEagle and Integrator. “As a long-endurance UAS, ScanEagle redefined ISR services for Group 2 UAS. Having persistent surveillance at nearly 20,000 feet for up to 24 hours adds a level of endurance to mission planning, no matter if it’s a battlefield, an ocean or commercial infrastructure,” Fluker said. “ScanEagle supports expeditionary missions with critical capabilities such as operating in remote locations without support systems or infrastructure and the ability to launch without a runway. It delivers the highest quality, persistent imagery on land or at sea – and the tools that turn that imagery into actionable information – to make the difference when every second counts.”

Fluker further explained that as a long-endurance Group 3 UAS designed and manufactured by Insitu, Integrator was conceived as a modular, flexible, multi-mission capable solution for both land and maritime operations. “The aircraft’s multiple payload spaces can be customized with cameras, communication capabilities and other advanced mission-specific technologies to suit operational needs. And because no nets or runways are required, the operator’s footprint stays small, no matter how big the mission,” Fluker said.

Insitu’s Integrator Extended Range (ER) provides Group 4 & 5 capability in a 74.8kg small UAS. Extended range operations include 14 hours of time on station at 550km and 20 hours at 350km. The Integrator ER has high-quality, full-motion video on par with much higher-priced ISR systems, while flying at acoustically and visually undetectable altitudes. It is designed for easy integration with multiple field-swappable payloads and can be operated by a fraction of the maintainers and mission commanders required for a Group 5 UAS. 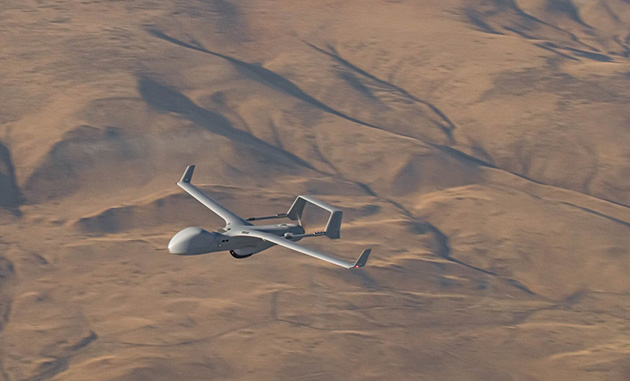 Another critical capability is that of MQ-25 Stingray, which represents the future of unmanned aircraft carrier aviation and will extend the reach of the carrier air wing. An unmanned aircraft system designed for the U.S. Navy mission, it will provide the needed robust refueling capability, thereby extending the combat range of deployed F/A-18 Super Hornet, EA-18G Growler and F-35C Lightning II fighters. The MQ-25 brings the right combination of refueling, autonomy, and seamless carrier deck integration to meet the U.S. Navy’s goals. Boeing is currently producing MQ-25 unmanned aerial refuelers for the U.S. Navy that are benefitting from months of early learning from flying the T1 test asset; years of investments in advanced, digital engineering design and manufacturing practices; and decades of experience building elite carrier aircraft. The MQ-25 recently completed historic refueling flights with the F/A-18 Super Hornet, E-2D Hawkeye and F-35C Lightning II, demonstrating the aircraft’s ability to deliver on its primary aerial refueling mission.

In addition, Boeing’s Airpower Teaming System (ATS) – also referred to as Loyal Wingman – is a new Australian-designed uncrewed aircraft to provide global customers with a disruptive advantage in airborne missions. It is unprecedented in that it is Boeing’s largest investment in a new uncrewed aircraft program outside the US. Airpower Teaming System completed its first test flight in February 2021 and continues to expand the flight-test program. 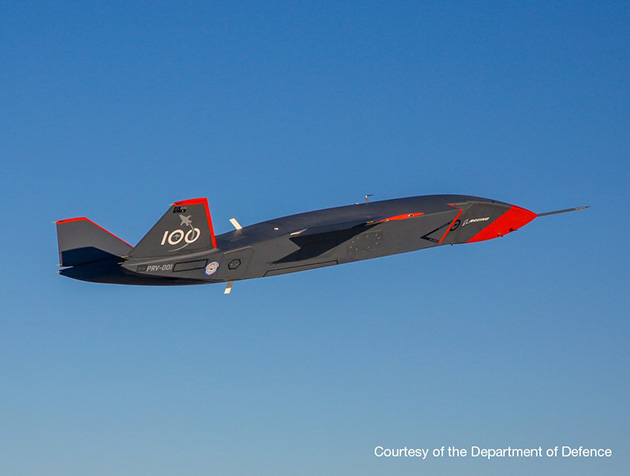 This purpose-built aircraft can be missionized to suit country-specific needs and will be a force multiplier for global customers. The modular and flexible nature of the ATS gives global customers control over the most important part of the aircraft – the missionization – which includes the systems, sensors and software that give it operational capability. The first batch of Loyal Wingman aircraft are serving as the foundation for the Airpower Teaming System being developed for various global defence customers. The aircraft will fly alongside other platforms, using artificial intelligence to team with existing crewed and uncrewed assets to complement mission capabilities.

Having been a part of space travel since the beginning, Boeing is employing the latest autonomous technology in the space domain to help protect human life, reach farther and accomplish more. From satellites to manned exploration to fully autonomous vehicles that operate in space for months at a time, Boeing is setting new standards for what is possible autonomously today and in the future.

The X-37B is one of the world’s newest and most advanced re-entry spacecraft, designed to operate in low-earth orbit, 150 to 500 miles above the Earth. The vehicle is the first since the Space Shuttle with the ability to return experiments to Earth for further inspection and analysis. This United States Air Force unmanned space vehicle explores reusable vehicle technologies that support long-term space objectives. In 2019, the X-37B set a 780-day on-orbit endurance record before landing at NASA’s Kennedy Space Center. The program has logged more than 3,300 days and travelled more than 1 billion miles on orbit in total. In 2020, the U.S. Department of the Air Force and Boeing X-37B autonomous spaceplane received the prestigious Robert J. Collier Trophy for the greatest American achievements in aeronautics and astronautics of 2019.

“In this new era of networked and distributed warfare, there’s one thing that remains unchanged: people are our most important resource. That is why Boeing remains committed to innovating safe, reliable autonomous capabilities across all domains, from seabed to space, that will elevate the human advantage to the next level and equip warfighters with the best technology to achieve their missions,” said Lemaster.