In July 2020, Boeing was awarded a $22.9B indefinite-delivery/indefinite-quantity contract to supply up to 200 F-15EX jets to the United States Air Force with the first delivery order for 8 aircraft. U.S. Air Force leadership called Boeing’s contemporary F-15EX the most affordable and immediate way to refresh the capacity and update the capabilities provided by the aging F-15C/D fleets. Because the F-15EX is ready to fight as soon as it comes off the line, bases currently operating the F-15 can transition to the new EX platform in a matter of months as opposed to years.

Gen. Mark Kelly, commander of Air Combat Command, U.S. Air Force, said in September that the F-15EX and F-15E will provide big range, weapons and disruptive fifth-gen avionics and sensors to complement the F-35 in contested environments.” He also said “…there is absolutely zero doubt that 4th gen aircraft equipped with 5th gen sensors, avionics, and weapons bring disruptive and decisive effects to a peer fight….” “This airframe is a part of future force structure changes that are key to creating a fighter fleet that meets air superiority needs for our nation’s defense.”

Designed to deliver value to the U.S. Air Force and customers around the world, the F-15EX will be a backbone fighter for the service – not just today, but for the next several decades. The F-15EX is a ready-now replacement for the F-15C that includes best-in-class payload, range and speed.

In a briefing to reporters at Dubai Air Show, Thom Breckenridge, Boeing’s Vice President, Bombers and Fighters International Business Development, said the F-15 has a proven track record around the world, including in the Middle East, with Saudi Arabia, Qatar and Israel operating the F-15. “Boeing is building and delivering the most advanced F-15 configurations ever in the F-15 EX Eagle II for the U.S. Air Force and the F-15QA for Qatar.”

“As the most modern and advanced iteration of the Eagle family with contemporary sensors, advanced cockpit and unmatched range, speed and payload capacity, the F-15EX is gaining interest from multiple international customers,” he said. “We heard the demand signal from our warfighters, and we’ve responded with a proven platform that’s modernized and optimized to maintain air superiority now and into the future.”

The F-15 production line will remain active through 2030 and beyond, with the aircraft in operation through the 2050s. Given the contemporary sensors, advanced cockpit and unmatched range, speed and payload capacity of the F-15EX, there’s increased interest from both existing and new customers. We are increasing rate in the factory to meet the U.S. Air Force requirements and new demands from our international customers. 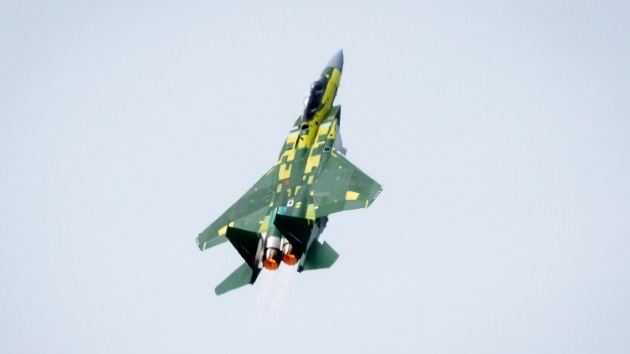 The F-15QA aircraft demonstrates its maneuverability with a vertical “Viking” take-off during its first flight on April 13, 2020.

In Qatar, the U.S. Department of Defense awarded Boeing a $6.2 billion contract in 2017 to manufacture 36 F-15 fighter jets for the Qatar Emiri Air Force (QEAF). In August, Boeing, in collaboration with the U.S. Air Force and Qatar Emiri Air Force, celebrated the naming and rollout of Qatar’s advanced F-15, the F-15QA.

“The Qatar F-15QA program further enhanced next-generation technologies in the advanced F-15 such as the fly-by-wire flight controls, an all-glass digital cockpit and contemporary sensors, radar and electronic warfare capabilities,” said Breckenridge. Driven by digital engineering and advanced manufacturing, these aircraft represent a transformational leap for the F-15. The F-15QA will enhance the superiority of the QEAF with more speed, range and payload than any fighter in the world.”

In Israel, Breckenridge said Boeing stands ready to support Israel with the most capable air superiority aircraft in production today – the F-15 - so they can meet their current and future defense needs. “With the capacity for technology growth and a 20,000+ hour economic operational airframe life, Israel can expect the F-15IA to serve as its front-line fighter well in the future. Boeing’s long-standing partnerships with Israeli industry will ensure F-15IA/I+ Program will bring economic benefits to Israel,” he said.

Breckenridge reiterated that recent investments made in the F-15 can be passed on to international customers. “We are increasing rate in the factory to meet the U.S. Air Force requirements for F-15EX and new demands from our customers globally. F-15EX is an indispensable complement to high-end force structures with affordability, speed, range, heavy-weapon payload and rapid technology paths. With its large weapons capacity, digital backbone, and open architecture, the F-15EX will be a key element of any tactical fighter fleet.” 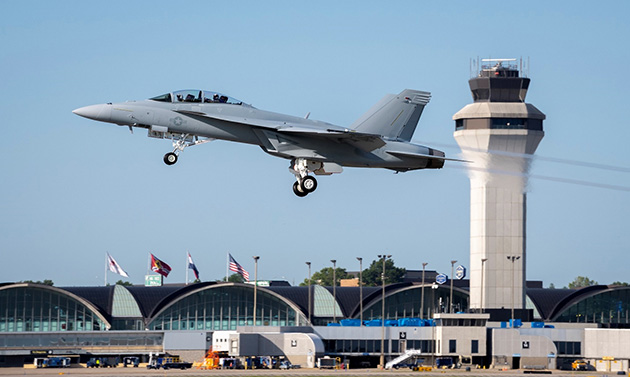 On the F/A-18 Super Hornet, Breckenridge said the Block III configuration is a transformative capability and that Boeing and the Navy have made multi-billion-dollar investments in. New technologies in the Block III Super Hornet, including increasing life of airframe to 10,000 hours from 6,000 hours of Block II, radar cross-section improvements and advanced cockpit system with a 10X19-inch touch screen display.

The Block III Super Hornet will come with advanced networking and open architecture design that will allow Super Hornet to work jointly with other assets and rapidly accept new technology to stay ahead of emerging threats and is enabled for the full integration of IRST. Boeing is delivering the F/A-18 with Block III capabilities from our production line.

“The fleet needs capabilities to keep its edge,” said Capt. Jason “Stuf” Denney, U.S. Navy F/A-18 and EA-18G program manager. “Getting the first operational Block III in our hands is a great step forward in supporting our capability and readiness goals.” Since the first delivery, Boeing is delivering two Block III fighters a month to the U.S. Navy.

The company will continue to deliver Block III capabilities to the Navy through the mid-2030s from three lines - one new build production line and two Service Life Modification lines.

“There is no set retirement date for the F/A-18,” said Breckenridge. “EA-18G Growler modifications are underway and will eventually include portions of Block III, expanding the Growler’s capabilities and operational relevancy.”

Breckenridge further added, “Here in the Middle East, we are honored to work with our Kuwaiti customer in bringing the F/A-18 and its next-generation capabilities to the Kuwaiti defense forces. Kuwait will be the first country to fly the advanced cockpit system, which is the most cutting-edge cockpit available today.”

Boeing delivered the final Kuwait Super Hornet to the U.S. Navy in the summer of 2021.