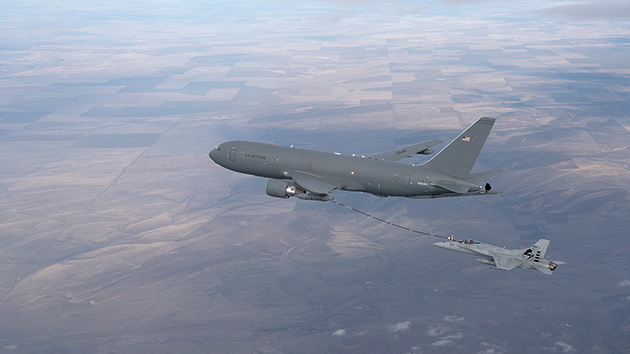 A KC-46A arrived at the Dubai Airshow 2021 to growing international interest and fresh off the first international delivery for the proven and matured multirole tanker.

“We are talking to a number of countries about their requirements and the KC-46’s capabilities. We are interested in talking to our Qatari Air Force customer,” he said. Flood also noted that the U.S. government had approved the Foreign Military Sale of eight KC-46 tankers to the Israeli Air Force and that Israel had signed a letter of acceptance for two aircraft in February 2021.

With Boeing on contract to build four KC-46As for the Japan Air Self-Defense Force, and with 50 deliveries and counting to the U.S. Air Force, the expanding international fleet of KC-46As is proven and matured for the next stage of combat air refueling capabilities.

Globally, the KC-46A has already completed more than 5,000 sorties and transferred more than 50 million pounds of fuel to other aircraft through its boom and hose-and-drogue systems, both of which come standard on every KC-46A. As a widebody, multirole tanker that can refuel all U.S., allied and coalition military aircraft compatible with international aerial refueling procedures, the KC-46 enables true global reach.

The aircraft is also equipped with robust defensive and tactical situational awareness systems that will help customers secure and maintain its air superiority. The KC-46 can detect, avoid, defeat and survive threats using multiple layers of protection, which will enable it to operate safely in medium-threat environments.

In addition, Boeing designed the KC-46 to carry passengers, cargo and patients. It carries 18 military standardized pallets (463L) in cargo configuration and accommodates a mixed load of passengers and cargo, making it a truly multi-mission aircraft.

“International customers will benefit tremendously from the proven and mature KC-46A’s as their combat air refueler of choice for decades to come,” Flood said.