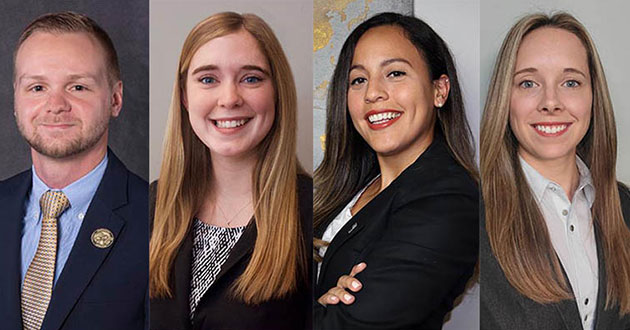 Ryan Demny never leaves Earth but works every day to ensure astronauts can effectively perform everything from exercise to research and meal preparation aboard the International Space Station or ISS.

As a crew systems and human factors engineer with Boeing’s Intra Vehicular team since 2018, Demny examines everything an astronaut touches on-orbit and works to improve it. The biggest adjustment is compensating for the lack of gravity in space and making functional equipment that is lightweight and small enough while still able to do the necessary work it was designed for. The role offers countless chances to improve equipment aboard the ISS and now includes designs for Mars transports and the Orbital Reef commercial space station.

“We’re taking the lessons learned from ISS and applying them to the next generation of spacecraft,” Demny said. “We’re very good at predicting what will happen with several months on-orbit, but we don’t have as much information for astronauts who have been in space for 1,100 days, so we have to work through that in our designs.” 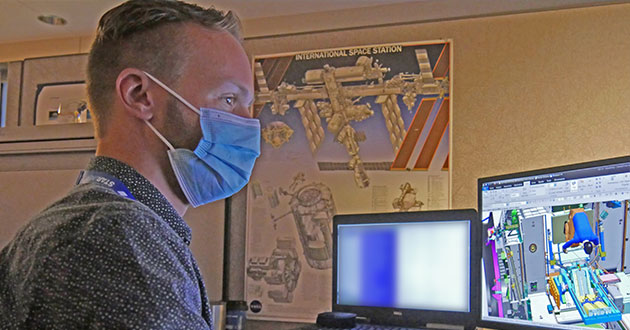 Demny is one of four Boeing Space and Launch employees to receive NASA’s Space Flight Awareness Trailblazer Award. Amy Comeau from the Commercial Crew Program and Alexsandra Olaya-Garcia and Lauren O’Doherty from the Space Launch System program also recently received the honor. The Trailblazer Award recognizes employees who are in the early stages of their career. Awardees must demonstrate strong work ethic and creative, innovative thinking in support of human spaceflight.

For Amy Comeau, engineering is in her blood. Her mom is an engineer who has worked on multiple programs at Raytheon Technologies, and her dad works at a machine shop. She’s been with Boeing since August 2018, first as a test support engineer in El Segundo, California, on satellite payloads before joining the CST-100 Starliner team in November 2018.

On the Starliner, Comeau facilitated communication between design and manufacturing engineers to develop mechanical and structural solutions; led multiple qualification efforts of various flight hardware for the spacecraft; served as test director for ordnance testing relating to components that jettison during flight; and assisted in creating technical packages and presented them to the Engineering Control Board within Boeing.

As a project engineer, she is now a member of the Chief Engineer’s Office assisting in solving complex system-level design and integration challenges, including troubleshooting efforts on the second Orbital Flight Test vehicle. 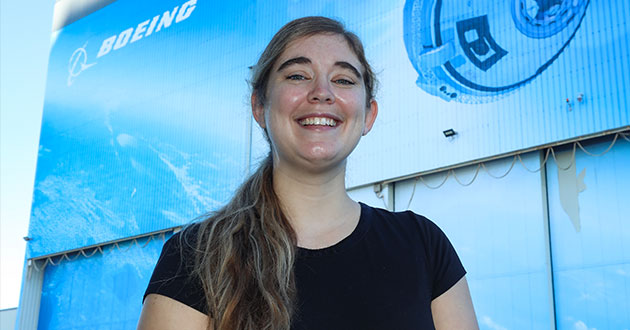 Amy Comeau, part of the CST-100 Starliner team, is shown in front of the Commercial Crew and Cargo Processing Facility.

“Amy is a problem-solver and such a great integrator,” said Alex Pest, Commercial Crew Program chief engineer, who nominated her for the honor. “Amy jumps into difficult problems and drives them to an acceptable technical solution while managing the schedule to support program needs.”

Comeau became an engineer because she wanted to help solve problems. Engineers can make a difference, she said, whether it’s building a bridge for an underserved community, working on medical devices or building technologies that enable research in space. She encourages elementary and middle school students to be curious, ask questions and understand how the world works.

“You get to help solve problems that affect the world around you,” Comeau said. “You get to see how what you do physically impacts the world.”

On the Space Launch System, or SLS, program, Alexsandra Olaya-Garcia’s job is to spot problems before they arise. As a member of the Launch Operations team, she is an integrator between her team and their NASA customer. Working inside NASA’s most powerful rocket is one of her favorite parts about her role.

“It’s hard for me to believe that the little girl that came from Peru at the age of 4, without knowing a word of English, is now working on NASA’s most powerful rocket,” Olaya-Garcia said of her experience. “Just being inside the vehicle and seeing our engineering models come to life is fascinating to me.”

She also designs and builds graphic displays that provide immediate access to critical data during launch. With the first mission targeted for 2022, her team is “tweaking” the displays during NASA’s series of launch simulations. 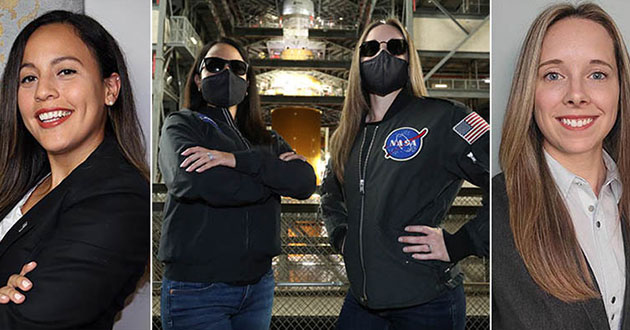 This work is critical for a smooth first SLS launch, but it’s just one of her responsibilities. In her five years with Boeing as a mechanical system design and analysis engineer, she’s also become an expert in pyro subsystem and flight termination systems, all of which helps her to deliver for the team on launch day as viewers worldwide watch the countdown. “Her enthusiasm, integrity and commitment to the SLS program shines bright. She is a true SFA trailblazer,” said Natasha Wiest, SLS Launch Engineering manager.

“Launch day is an important day, personally and professionally. My dad, who used to be a pilot in Peru, follows all of this closely,” Olaya-Garcia said. “He’ll be watching to see both [our] dreams, of having me contribute to America’s space program, come true!”

Industrial engineer Lauren O’Doherty is another good reason the SLS team has kept on track for launch. She implemented a disciplined scheduling process for core stage operations at Kennedy Space Center in Florida to ensure timely completion of Boeing work on the critical path to launch — including the integration of Boeing work into the center’s operations.

“Lauren leads by example, sets high expectations for herself and others, and holds the team accountable for their responsibilities,” said SLS core stage 1 director Mark Nappi, who nominated O’Doherty for the Trailblazer award. The results of her work were recognized by NASA as one of Boeing's best practices.

“As an industrial engineer, process improvement is always at the forefront, so being able to drive creativity within our team and create opportunities to recover from delays has been gratifying,” O’Doherty said. “The schedule process we’ve implemented from Green Run until today has shifted the culture and I am thankful to have been a part of that. We want to be the best at what we do, so we’re always looking for creative ways to get the job done more efficiently, and in human spaceflight, that means safety is factored in every step of the way.

“We’re all accountable for the safety of the astronauts who will one day fly on these rockets,” O’Doherty added. “And we make that a focus every day.”