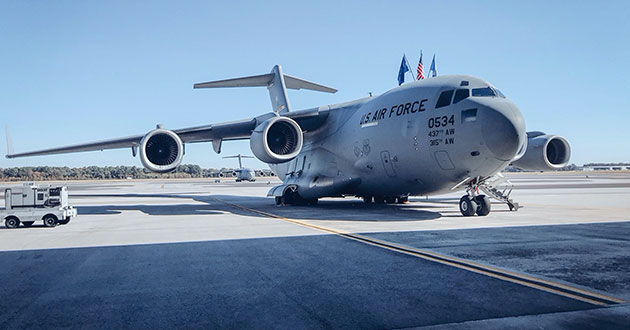 This C-17 Globemaster III became the first of the global fleet of 275 aircraft to achieve 25,000 flight hours on November 16, 2021. The U.S. Air Force celebrated this milestone at Joint Base Charleston, the first home of the C-17.

The U.S. Air Force celebrated its first C-17 Globemaster III to achieve 25,000 flight hours on November 16, commemorating the milestone with a ceremonial flight at Joint Base Charleston (JBC), where Boeing delivered the first production Globemaster III in 1993.

“The C-17 has been a workhorse for the Air Force and a vital part of the Joint Base Charleston mission since they arrived on station 28 years ago,” said Col. Robert Lankford, U.S. Air Force 437th Airlift Wing commander. “The airframe is great because it is both strategic and tactical, and we’ve seen time and time again the plethora of mission sets it can perform.”

“You can’t achieve this many flight hours without a world-class sustainment model,” said Angelo. “The Air Force has partnered with us to design a unique, performance-based, virtual support model that has kept readiness rates high, while reducing sustainment costs.” 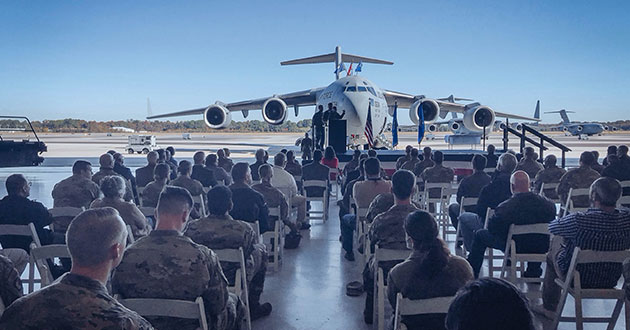 The global C-17 fleet is supported through a performance-based logistics contract that incentivizes Boeing to maintain a high standard of performance. Each operator contributes based on their percentage of the worldwide fleet and has access to a global inventory of spares. It’s a unique approach for a military platform, similar to support models adopted by commercial airlines.

The U.S. Air Force recently renewed the partnership with a phased contract award of up to $23.8 billion including options and incentives over 10 years, which is one of the largest services contracts in Boeing’s history. The program is currently funded through September 2024 with a Phase I award of $3.5 billion.

The C-17 was to be designed to withstand 30,000 flight hours, and then certified to fly 42,750 flight hours. In partnership with the U.S. Air Force and eight global partners, Boeing leverages analytics and digital tools to help each aircraft safely surpass its service life objectives in support of critical missions.

The United States, Australia, Canada, India, Kuwait, Qatar, the United Arab Emirates, the United Kingdom, and the 12-nation Strategic Airlift Capability all operate the C-17 Globemaster III, which has been at the forefront of every global humanitarian relief effort since it entered service in 1995.