Boeing has demonstrated that data can successfully be shared across systems, domains and providers to create a common operating picture to deliver decision superiority to warfighters. (Boeing)

Boeing recently conducted a virtual demo from its Joint All Domain Command and Control (JADC2) Lab that successfully combined data from different sources for multiple platforms across domains to create a common operating picture.

Boeing software engineers demonstrated how the JADC2 Lab's ‘data fabric’ could combine real-time sensor data from Liquid Robotics’ Wave Gliders located in Hawaii and California with Automatic Identification System (AIS) ship data from the DoD’s Unified Data Library. The JADC2 Lab data fabric is a set of capabilities, host data services and products to contribute to a common operating picture for all users.

During the demonstration, the position data from the Wave Gliders, which are long-duration Unmanned Surface Vehicles (USVs), as well as sensed AIS tracks were shared with a simulated E-7 Wedgetail operator, while E-7 data was shared with the JADC2 Lab to form a common operating picture.

By operating over the horizon and enabling real-time communications to sensors and systems below and above the sea, the Wave Glider Unmanned Surface Vehicle (USV) delivers vital intelligence on maritime threats for greater situational awareness and better decision-making. (Liquid Robotics)

“The ability to share any data across systems, domains and providers will be critical in the interconnected battle space,” said Gerrin Inman, a Boeing software engineer and the JADC2 Lab demo team lead. “Resources are constrained at the tactical edge due to Size, Weight and Power (SWaP) considerations, but the JADC2 data fabric ensures that warfighters at the tactical edge have the latest capabilities and insights informed by the AI algorithms and data sets of the entire network.” 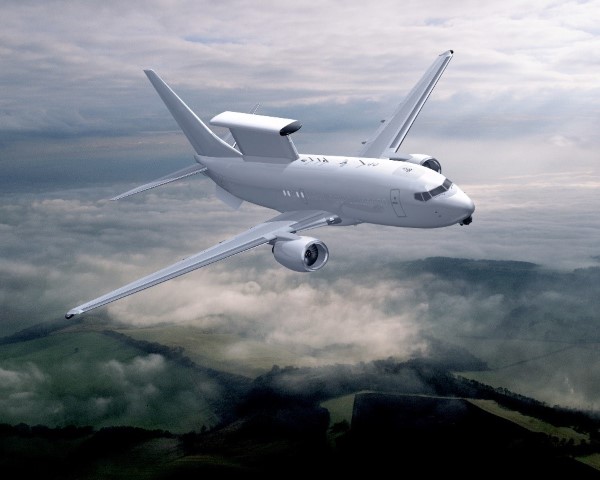 The demonstration also achieved another important objective: to show how Boeing’s Nostromo DevSecOps pipeline could detect a bug in the operational software and deploy an automated update to the E-7’s Mission Systems. In the hypothetical scenario, a bug in the data code resulted in the E-7 operator seeing inaccurate ship location information. The E-7 operator reported the issue to an operations center, represented by the JADC2 Lab, which then leveraged Boeing’s DevSecOps pipeline to fix the bug and deploy an automated update. The entire process caused minimal disruption to operators and downstream users.

While the OMS-heavy E-7 was the primary platform in the simulated scenario, the possibilities for sharing data and common operating pictures between multi-domain systems is endless – from sensor to sensor, to platform, to shooter. Boeing’s focus on open architecture and DevSecOps provides warfighters with modern tools and capabilities for software development at the speed of relevance.

“What we’ve demonstrated is the future of warfighting, which will only continue to evolve away from a platform or system-based approach and towards the internet of military things,” said Scott Dickson, Boeing’s director of Multi-Domain Integration. “If you can push updates to a system confidently and in real time without having to take it out of service, the result is greater mission readiness.”

Located at the Boeing Developmental Center in Tukwila, Wash., the JADC2 Lab provides a location to integrate, rapidly prototype, and mature joint solutions while adhering to open architecture consistent with the DoD’s approved tech stack. Boeing stood up its JADC2 Lab in 2020 as the Air Force started up its Battle Lab.