Bridget Odom knows the importance of listening and asking questions — whether collecting and analyzing volumes of data to support homeland missile defense or making elaborate cakes for friends and family members.

As an analyst with the Boeing Ground-based Midcourse Defense (GMD) System Test Integration and Analysis team, Odom collaborates with customers to understand their test goals. The Alabama-based engineer then partners with her teammates to collect and interpret the requested data, reporting anomalies as they arise so that issues can be corrected and systems work exactly as planned.

Odom’s goals on the job are strikingly similar to a pattern she follows when baking: test, analyze and fix. She’s just as determined to get things right for the customer — the first time — as she is to roll out a flawless fondant. Details are important to her.

“I’m a perfectionist, so whether I’m listening to a customer request or taking a cake order, it’s important to get all the information I can,” Odom said. “I want my results to be something I am proud of.”

Odom’s foray into baking began when she made a small smash cake for her son’s first birthday. As her family has grown, with the arrival of another son and a daughter, so has the number of birthday cakes she makes. Her confections have become increasingly sophisticated, too. 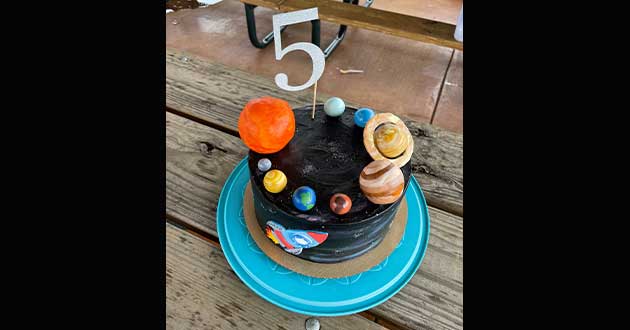 Odom has been baking cakes for several years, and with each creation, she tests and learns something new.

“Every time I try something new with cakes I make different discoveries,” Odom said. “I’ve learned a lot through trial and error, paying attention to how the smallest differences in things like bake times or the weight of the ingredients can change the outcome.”

Precision, she said, makes all the difference — with her cakes but also with her customers. Odom takes great pride in delivering first-time quality. Even after she and her teammates have prepared a data package, they thoroughly review their work to ensure they meet or exceed their commitment.

“It’s really nice when you do something to make your customers happy,” Odom said. “Getting them exactly what they need is the best feeling.”

The same goes when she bakes, though making cake dreams come true is not as simple as it may seem. Her kids usually have a grand vision of what they’d like, Odom said, but the specifics they give her are often less than concrete.

“When my son says he wants a space cake, does he want a planet or a rocket? It’s not easy communicating with a 5-year-old,” Odom said. “That conversation is a lot different than one I’d have with a customer, yet in both cases communication is key. I want both to be happy, and that motivates me.”

Before long, Odom will likely receive even more cake requests. She is expecting a fourth child in February. Luckily, baking has become a bit of a family affair. Her kids and her mom like to help, and baking has also become a date activity for Odom and her husband, Derek. They both work a flexible schedule and sometimes spend their off-Fridays baking together.

“It turned out to be a lot of fun,” Odom said, recalling how Derek’s involvement in baking has grown over time. “It’s a great outlet for the two of us.” 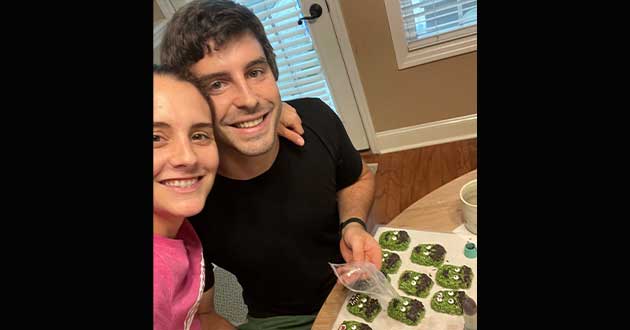 Odom and her husband spend time together baking.

The pair met at the Boeing facility in Huntsville while both were part of an internship program offered through their university.

After finishing her degree in mechanical engineering, Odom returned to the Huntsville campus as a full-time employee.

“It felt really comfortable coming to Boeing, because the people are great,” she said. “If you want to do something new, people will support you and help you learn. I knew I’d never get bored.”

Odom spent the first years of her Boeing career rotating between projects for the 787 Dreamliner, KC-46 tanker and Space Launch System programs. Then, she was invited to join the GMD team and soon became team lead. In addition to the challenging projects she works, Odom enjoys the camaraderie she shares with teammates. They rely on one another’s support, she explained, whether asking questions, offering help or joking together.

“My team has a way of lifting me up on even the toughest of days,” Odom said. “Boeing has always felt like family.”