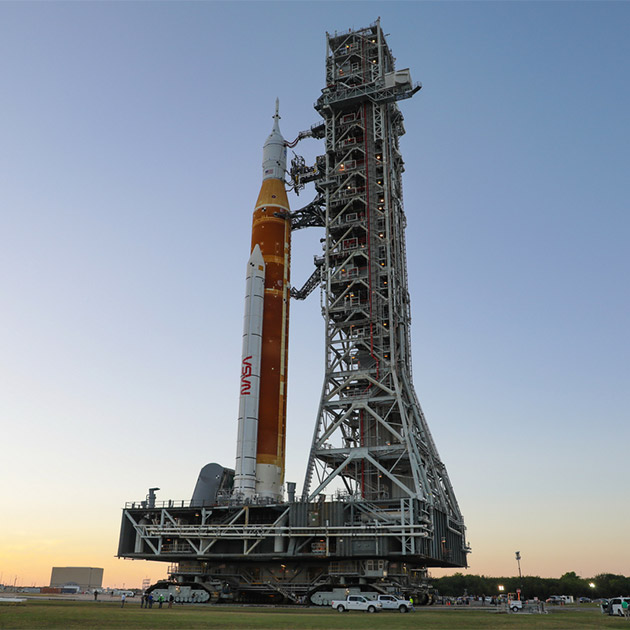 All the world — and now far beyond — is a stage. The show doesn’t get much bigger than a 5.75 million-pound (2.7 million-kilogram) rocket traveling at 24,500 mph (39,400 kph) to propel a human-rated spacecraft to the Moon. But before the big launch, two days of mission-critical testing, known as wet dress rehearsal, or WDR, takes place to position the performance for its best showing.

The Big Ben–size rocket has been undergoing a series of connections and checks at Kennedy Space Center’s launch pad 39B in Florida since its March 17 rollout. Now it’s ready for WDR, a 45.5-hour event scheduled to start Friday, April 1, that serves as the final major test of teams and machines before NASA’s Space Launch System, or SLS, sends the uncrewed Orion spacecraft 280,000 miles (450,000 kilometers) from Earth on the Artemis I mission.

During WDR, the launch team will run through operations to load 733,000 gallons (2.8 million liters) of cryogenic propellants into the rocket’s Boeing-built core stage and additional propellants into the United Launch Alliance–built Interim Cryogenic Propulsion Stage. The team will also conduct a practice launch countdown, including holds, to about 10 seconds before liftoff.

Casual viewers won’t see much beyond wreaths of mist from boiling-off propellants, but a lot will be going on behind the scenes.

Loading, holding and unloading supercold liquid oxygen and liquid hydrogen, testing all the connections between the mobile launch platform and the vehicle, and rehearsing the countdown gives the launch team insight into their own processes and procedures, as well as the integrated system’s health and status.

Among those carefully watching will be SLS Launch Integrated Product Team leader Subashini Iyer and her team.

“This SLS is new, state-of-the-art technology. It’s the most powerful rocket NASA’s ever built, and safety is paramount,” Iyer said. “So the Boeing team is here at Kennedy Space Center to answer questions on avionics, propulsion, pyrotechnics, logistics, ground support equipment, the structure and mechanics of the SLS core stage, and the thermal protection system — to name just a few things. We’ll watch the WDR from the console to gather data and help respond to any issues.”

Boeing employees will use their own display units to analyze the terabytes of gathered data, and continue to support NASA throughout the mission.

When the curtain closes on WDR, the SLS and Orion will stay at the launch pad for several days before rolling back to the Vehicle Assembly Building for final tests and adjustments prior to launch.

At liftoff, the SLS core and upper stages, along with the solid rocket boosters, will produce 8.8 million pounds (4 million kilograms) of maximum thrust, 15% more than the Apollo-era Saturn V rocket. It’s the only rocket that can lift Orion, which will carry NASA astronauts around the Moon for Artemis II.

“The feeling at Kennedy right now is one of excitement and collaboration,” Iyer said. “We’re all honored to be a part of history, and the WDR is an important step along the way.”

After WDR, NASA will have the data needed to officially set a date for launch.