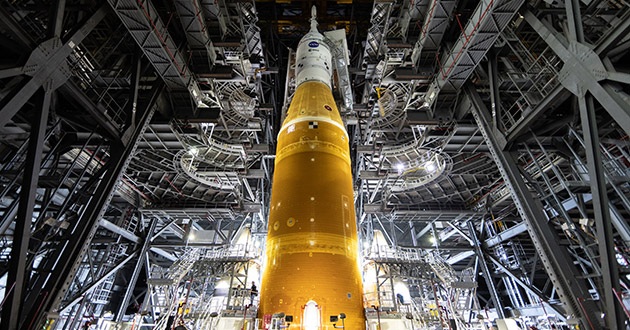 The integrated Space Launch System stack is prepared for rollout at Kennedy Space Center in Florida, the first time a Moon rocket has traveled to a launch pad since 1972. It measures 7 feet (2.1 meters) taller than London’s Big Ben clock tower.

Humanity’s return to the Moon and beyond moves one step closer later today as NASA’s 322-foot (98-meter) Space Launch System rocket and Orion spacecraft make the four-mile journey from the Vehicle Assembly Building, or VAB, to Launch Complex 39B at Kennedy Space Center in Florida.

The rollout will be the first time the fully stacked rocket for the Artemis I mission is seen without being encumbered by work platforms. Since completing testing by itself last year, the Boeing-built core stage has been joined to a pair of solid rocket boosters, an upper stage from United Launch Alliance and an Orion capsule and service module.

“We’ve been part of building a launch vehicle that’s more powerful and capable than anyone has seen before, a family of rockets that will take human exploration back to the Moon and beyond,” Grow said. “When we see all the pieces rolling out together — that will be a milestone moment.”

Follow along with NASA Live and @BoeingSpace as the rollout coverage begins at 5 p.m. Eastern time.

The core stage, which Boeing built at the Michoud Assembly Facility outside New Orleans, is the largest single rocket stage ever built. It stands 212 feet (64.6 meters) tall, nearly as tall as both the first and second stages of the Saturn V rocket combined.

Building such a massive structure — strong enough to support the full stack while being light enough to fly — called for innovative manufacturing techniques such as a vertical welding fixture and tools that used friction-stir welding to create the massive hydrogen and oxygen tanks that together form the core stage.

SLS will make an approximately 11-hour journey to the launch pad for more than a week of tests culminating with the wet dress rehearsal — propellant loading and unloading during a simulated countdown.

After the wet dress rehearsal is completed, NASA will set a launch date for the Artemis I mission. The launch vehicle will return to the VAB to continue to prepare for that flight test, which will send the uncrewed Orion around the Moon and back.