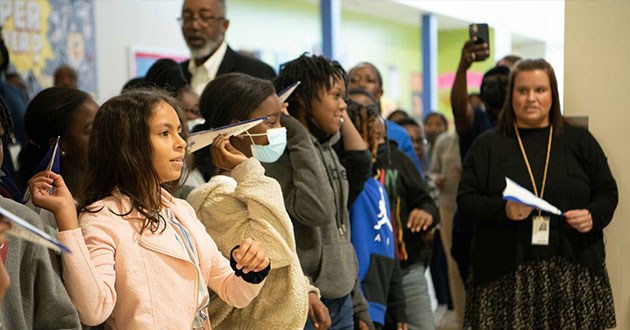 Students eagerly gathered in the hallway of North Charleston Elementary School, paper airplanes in hand. Guided by adult volunteers, they had constructed the planes after learning about the principles of flight, hoping their craft would fly the farthest. At the cue, they released planes and watched as they soared down the hall.

Sessions like this have taken place at schools in every county in South Carolina. But, this particular event was special—these students had just helped Boeing’s DreamLearners program reach more than 1 million participants since it began a decade ago.

“My love of aviation started with building paper airplanes and has continued to this day,” said Eric Harris, Boeing materials and transportation manager, and DreamLearners volunteer. “When the DreamLearners program began, I was drawn to it because of the important role that STEM-based programs played in my childhood. Seeing how the program and its community impact has grown inspires me to connect with others and do more.”

DreamLearners, which began in 2012 at Boeing South Carolina, is an instructional program based on elements of science, technology, engineering, and mathematics (STEM). Students participate in hands-on group activities, discover different careers at Boeing and learn about the benefits of a STEM-focused education. The program is open to students of all ages. 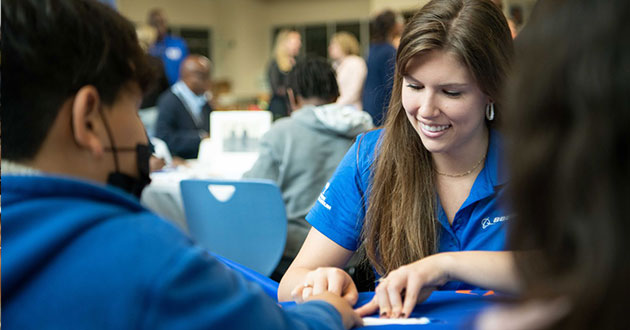 A Boeing volunteer guides students through the DreamLearners activity.

Frank Hatten, Boeing education relations specialist at Boeing South Carolina, created and continues to lead, DreamLearners. Hatten has long had a passion for educating and inspiring youth through his volunteer efforts.

“I have one of the best careers in the company,” Hatten said.

As part of the DreamLearners program, Boeing volunteers visit schools and community groups to bring these unique STEM resources to students across the state. Since its inception, more than 7,600 teammates have volunteered with the program’s education-related engagements. In response to the COVID-19 pandemic, the program also added a virtual learning component, which inspired Nalena Kennett, project manager at Boeing South Carolina, to further expand the reach of the program.

“Taking DreamLearners into tribal communities has led to inspiring a whole new generation of indigenous students to seek not only STEM fields but to work for Boeing someday,” Kennett said. “Some of these students had never heard of Boeing, never had career speakers come to their classrooms, never had a company make efforts to personally interact with them. I’m grateful to be able to provide guidance and advice in their learning and their lives and show them that this company cares about them and now their future can start here at Boeing!”

“STEM education unlocks tomorrow’s innovations, encouraging breakthroughs and advancements we can’t even imagine today,” said Ziad Ojakli, executive vice president of Government Operations at Boeing, who also attended the event. “Boeing celebrates the inspiration and sense of accomplishment STEM programs can bring to young minds, and we are proud to champion a unique program like DreamLearners.”

As part of the Boeing Days initiative, the DreamLearners program visits schools in every county throughout the year.

“Volunteering with DreamLearners means having the opportunity to sow seeds of aspiration in the minds of the future,” said Tiffania Ham Fayall, DreamLearners volunteer. “I believe through community service I can connect with at least one child, teen, or adult, sharing the importance of STEM education and desired skills needed in careers.”