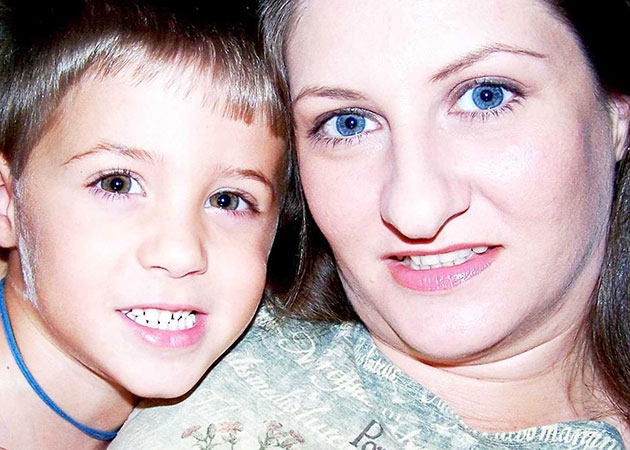 Dawn Warnstrom’s journey from novice to expert would not have been possible, Warnstrom said, without her son, Matt, who was diagnosed with an autism spectrum disorder at age 3.

Dawn Warnstrom once had to beg potential employers to give her a chance. Without a college degree or any experience in government contracting, Warnstrom knew she was a tough sell. Yet, as a single parent to a toddler with emerging special needs, she was determined to support her son.

Warnstrom recalls telling a hiring manager for a temporary position, “If it doesn’t go well, you can get rid of me. I just want to work.” Two months into the assignment, she became the first person on the team to deliver a perfect product on time.

“They pretty much hired me full time on the spot,” Warnstrom said of her former employer. “That became a pivotal moment in my career. I realized that really, really hard work pays off.”

Now with Boeing for almost 10 years, Warnstrom is an expert in her field. She and her team develop and deliver multimillion-dollar contract proposals for Missile and Weapon Systems, supporting programs such as Ground-based Midcourse Defense that are critical to U.S. security.

“I don’t think I’d be here today if it weren’t for the privilege of being Matt’s mom,” Warnstrom said, referring to her now-adult son, who was diagnosed with an autism spectrum disorder as a child. “Being an advocate for him led to me being an advocate for my teammates and for the warfighter.”

As she parented Matt, she learned more about the world around her. For example, Matt’s unconventional way of learning helped her see that there’s rarely only one way to do things.

Resetting her expectations as a parent

Warnstrom’s son was 3 when she first noticed something was different. During day care pickup, Matt’s peers would rush to their parents’ arms, while Matt would run the other direction from Warnstrom and hide. She remembers the looks from teachers and other parents. To her, they seemed to wonder: “What have you done to your child? Why doesn’t he like you?”

“Your world is a lot different when your child isn’t neurotypical, but different is OK,” Warnstrom said. “If there’s one thing I’ve learned, it’s that everyone is different.”

She works with “some of the brightest people in the country,” whose innovations keep the warfighter in front of the threat.

“Yet sometimes even rocket scientists can’t figure out how to get the Excel print setting right,” Warnstrom said. “The point is we all have abilities and disabilities.”

It’s a realization she wishes she had come to early in her career.

Making her mark without a college degree

Warnstrom joined Boeing as an assistant to a cost account manager. She hoped to take advantage of Boeing’s educational benefits and get a college degree, but caring for her son consumed her time and energy — sometimes even disrupting her workdays. She never knew when Matt’s school might call and ask her to pick him up immediately.

Warnstrom decided that her greatest contribution to her team would be working harder than anyone else. When she saw a need, she filled it, no matter how tedious the task.

Soon she was asked to take on substantial assignments, including many outside her primary responsibilities. She learned by trial and error and through mentors. Year after year, she accumulated more experience in the proposal process until she realized that more people were leaning on her for her expertise than vice versa.

Her teammates thought so highly of her skill set — and her attitude — that they named their interactions with her. “The Dawn Experience,” as they call it, speaks to Warnstrom’s knowledge of the proposal process and her ability to answer most questions that come her way. But “the Experience,” she said, is also about her willingness to get down in the trenches and partner with people.

Finding her way and leading others

Humility has played an important part in Warnstrom’s career progression. She never felt there was any job too small or “beneath” her. Yet it’s her ability to see the big picture — and act on it — that has propelled her as a parent and a professional.

The deluge of advice from her son’s well-intentioned doctors, teachers and therapists often left her overwhelmed. To clear her head, she started to ask herself key questions, such as, “Is my son happy and healthy? Does he feel cared for and safe?” The answers helped her better understand how to advocate for Matt.

“The hardest part of having a child with special needs is getting out of your own way,” Warnstrom said. “There are times when you have to rise above what everyone thinks you should do, and in that elevation, you find the air you need to elevate even higher.”

That approach is useful in the workplace, too. When Warnstrom or her teammates face uncertainties or conflicts in the proposal process, the question that centers them is: “What is the impact to our customer and our country?”

Putting the customer first often means putting her teammates first, Warnstrom said. When colleagues ask for help, she explains the what and the how, but she also goes the extra distance to explain the why.

“The more you get people to invest in the process, the better the processes become,” Warnstrom said. “You can make it fun for people and less scary.”

One of the greatest rewards for investing in others, she added, is feeling that she has made a difference — for the warfighter, her colleagues and her loved ones. Customers trust her; teammates rely on her; and her son, now 22, advocates for himself.

After devoting many years to raising her son (pictured, at left, graduating high school) and progressing in her career, Warnstrom practices self-care through activities such as hiking with her husband, Adam.

That leaves her with more time to tend to her own needs. She and her husband, Adam, whom she married when Matt was 7, love to garden together and spoil their three poodles and two cats. Warnstrom also is eyeing the classes she wants to take through Boeing’s Learning Together Program. The only problem? Narrowing her selections.

“I’m such a curious person that it all interests me,” Warnstrom said. “I’m still figuring it out. The sky is the limit.”