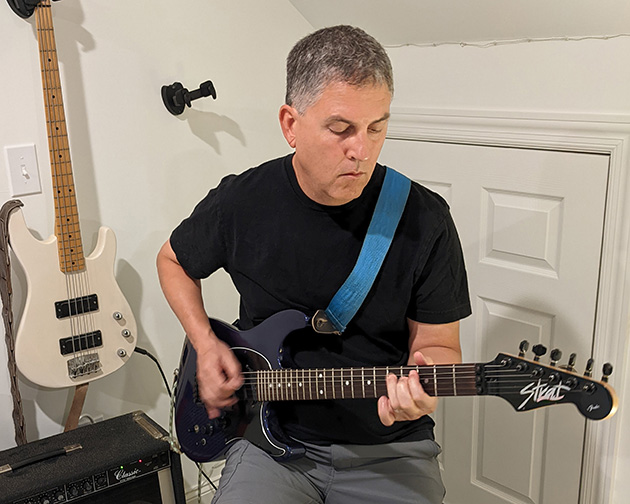 Randy Vandiver is a steady figure in both missile defense and rock and roll.

Randy Vandiver’s day job is like an epic jam session, even without musical instruments.

The mechanical engineer and lifelong musician plans flight tests for Boeing Missile and Weapon Systems, and he choreographs those tests much the way a music producer directs a band.

Understanding the big picture comes naturally to Vandiver, whose experience supporting homeland defense extends almost 26 years. He is one of the longest-serving members of programs such as Ground-based Midcourse Defense. His musical background goes back even further.

As a child, Vandiver played piano. Eventually he picked up trombone, baritone, drums and guitar, joining the marching band in high school and a rock band in college. He counted many hard-rock stars among his idols. Yet music wasn’t the only thing to captivate Vandiver during his formative years. He remembers the moment he knew he wanted to be an engineer.

Before joining Boeing, where he is a flight-mission manager, Randy Vandiver played in a classic rock band in Birmingham, Alabama.

“I was on a class trip to the U.S. Space & Rocket Center, and there was a robotic arm you could manipulate,” Vandiver said. “It was so mesmerizing.”

Shortly after that trip, Vandiver decided to build his own robotic arm for a science project. He enjoyed the project so much that he applied to the engineering program at The University of Alabama in Huntsville. After graduation, an engineering firm asked him “to come work on something called national missile defense.” That job eventually led him to Boeing, where he worked his way from ground test to flight test.

There’s nothing easy about flight test. A single event can require years of preparation yet culminate in a day. Vandiver works with many teammates around the world, from product and integration teams to quality and mission assurance specialists, keeping them aligned on daily objectives and united in the flight-test mission. “It takes every single person on the team to pull it off,” he said.

The closer the team gets to the test date, the more intense Vandiver’s job becomes.

“There’s so much to do all at once, but it’s just exhilarating,” he said. “When you have put all your blood, sweat and tears into preparing, you are emotionally invested. You want to get it exactly right for the customer the first time.”

Orchestrating a flight test, Vandiver added, is really about serving others, from his teammates to his customers and his country. That’s something Vandiver realized while participating in Leadership Next, a two-year program Boeing offers to help employees grow their skills.

“I don’t want to be the guy just directing everyone else,” he said. “I need to be managing but also doing. If someone needs help, I’m going to dig in.”

Even as Vandiver harmonizes program schedules and demands, he is careful to balance his work responsibilities and personal time, as he learned in Leadership Next. He and his family like to visit friends in Tennessee who share his love of music. There, he grabs an electric guitar and they jam all weekend, proving that it’s not a long way if you want to rock and roll. It’s just a three-and-half-hour drive from Huntsville to Knoxville.