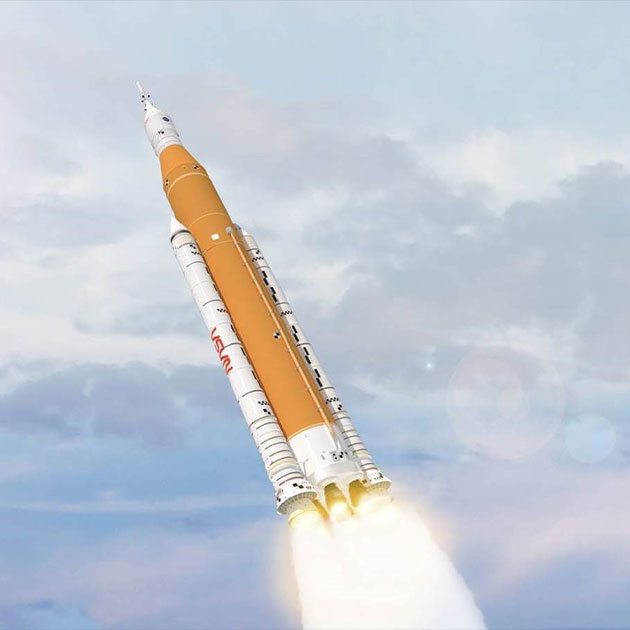 The first eight-and-a-half minutes after launch is the Space Launch System core stage’s time to shine. After the Orion capsule is safely launched into orbit, and the SLS’s job is completed.

Soon, millions will watch in awe as the Space Launch System (SLS) rocket ignites and soars into the sky for NASA’s Artemis I mission.

The first eight and a half minutes after launch is the core stage’s time to shine. The SLS core stage will reach over 17,000 mph before the upper stage takes over and propels Orion into lunar orbit. The thrust required to make this possible comes from the four RS-25 engines and the 725,000 gallons of cryogenic propellant.

This is the journey of the core stage – from lift off to separation – and why its premier performance is so vital to the overall mission.

Once cleared from the tower, Artemis will perform a rollover maneuver to steer the vehicle onto the desired trajectory.

As the vehicle continues to gain speed, it can withstand more than 2 million lbs. of thrust – thanks to a unique welding technique that increases the integrity of the structure. Known as self-reacting friction stir welding, two metals are blended together by heat generated from the friction of the welding tool. This method was used on both the liquid hydrogen tank and liquid oxygen tank, which makes a joint that is actually stronger than the metal plates. While friction stir welding was used in external tanks for the space shuttle flights, the scale at which Boeing performs this technique is unique.

Just over a minute after launch, the vehicle will begin to reach the point of greatest atmospheric force – also known as maximum dynamic pressure or Max-Q – and begins to decrease its rate of acceleration.

“It’s important the decrease happens, as the forces could actually add stress to the vehicle,” said Brandon Burroughs, who worked on the first core stage before joining Business Development for Space and Launch. “Once the atmospheric pressure lessens, the vehicle will throttle back up.”

The environment that the rocket will experience during this time is similar to the stress the vehicle faced here on earth during testing.

“During the Green Run testing in Stennis, all of the core stage systems were tested to demonstrate functionality and performance, including the Main Propulsion System – which saw cryogenic temperatures down to -423F for the first time,” said Jason Grow. “The highlight of the Green Run testing was the Hot Fire, when all four engines were started and ran for full mission duration.”

Once the Solid Rocket Boosters (SRB) burn through their solid propellant, they are safety jettisoned away from the vehicle. The rocket continues on, guiding itself to orbit.

At this point in the mission, the service module panels, or fairings, are jettisoned to lighten the vehicle. Orion’s solar arrays, still folded in place, are then exposed to space.

Just 40 seconds later, the Launch Abort System (LAS) also jettisons, as it is no longer needed.

Once at the desired velocity and altitude targets, the four engines of the core stage will have burned through all of its propellant and will shut down. The process, known as Main Engine Cutoff (MECO), readies the core stage to hand over the launch to the upper stage.

Once the engines have shut off, the core stage separates.

At just eight and a half minutes after liftoff, the Orion capsule is safely launched into orbit via the Interim Cryogenic Propulsion Stage (ICPS), and the SLS core stage’s job is completed.

“The euphoric mix of joy and relief I will feel at 8 minutes and 31 seconds post-launch will be unbelievable. After a decade of research, innovation and perseverance, the SLS rocket will have successfully completed its journey and positioned Orion to circle the Moon.” Burroughs said. “What an honor it is to be part of this historical program.”

Follow along as NASA makes history in the inaugural Artemis I mission by watching the countdown, launch and mission beginning on Aug. 29 at nasa.gov/live and on NASA TV.