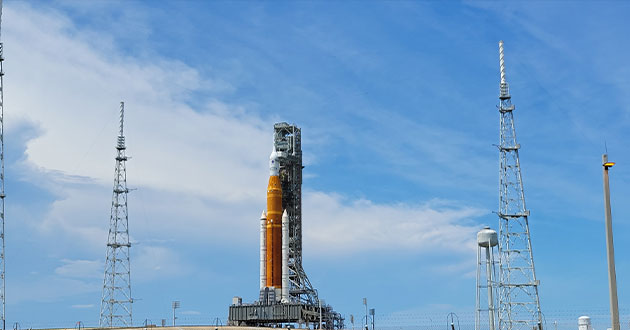 The Artemis I launch vehicle is seen at Launch Complex 39B as teams prepare it for the first launch opportunity on Aug 29 on a flight test to lunar orbit.

The Artemis I flight test calls for the Space Launch System rocket with its Boeing-built core stage and two solid rocket boosters to generate almost 9 million pounds of thrust at liftoff in order to launch the Orion spacecraft to the Moon some 240,000 miles away. On launch day, Aug. 29, the teams will have two hours when that launch can take place and still put Orion on the right path to Earth’s closest celestial neighbor.

That timeframe is known as the launch window and every mission to space includes the calculation whether it is Starliner going to the International Space Station, Orion heading into lunar orbit or even a robotic probe being sent to scout a distant planet.

Put simply, mission planners cannot wait for the Moon to be over the launch site. They have to point Artemis at the area the Moon will be after several days of transit from Earth.

“If you aim at the Moon where it is when you launch, then you are going to miss it by quite a lot,” said Jorge Frank, a Guidance, Navigation and Control engineer on Boeing’s Starliner program. “You aim to the point where the Moon is going to be in the time that you get there. As you are on your way out, you are waiting for the Moon to catch up.” 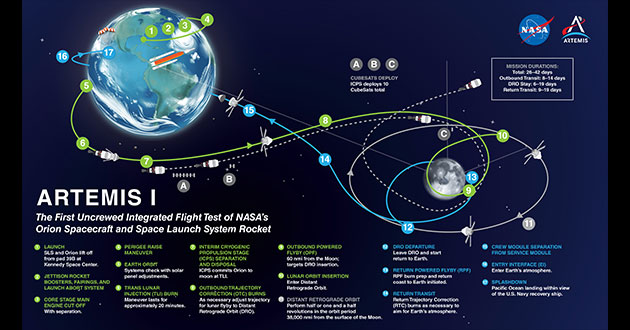 The Artemis I mission map for a 6-week mission to lunar orbit on the first integrated flight test of the program.

Considering that Artemis I is the first flight of the Space Launch System and Orion spacecraft together, two hours may not sound like enough time to get a technical issue sorted. However, two hours is a much longer window than the launch opportunities available for missions to the ISS. For space station launches, the spacecraft has about a second to get off the launch pad or come back later. Any technical issue late in the countdown usually means a scrub for the day in those cases.

That shortened timeframe is necessary because the ISS is only a few hundred miles above Earth and orbits the Earth once every 91 minutes. The Moon, on the other hand, moves much more slowly in its orbit around the Earth because it is about 1,000 times farther away than the ISS. It takes the Moon about 27 days for the Moon to orbit the Earth.

Also complicating the lunar mission planning is a critical burn called Trans-Lunar Injection, or TLI, that accelerates the Orion spacecraft from an Earth orbit speed of 17,500 mph to a speed of 25,000 mph – Mach 32 – in order to escape Earth’s gravity and move out to the Moon. Orion is not powerful enough to make that burn on its own, so the Interim Cryogenic Propulsion Stage provided by United Launch Alliance through Boeing will boost Orion out of Earth orbit and place it on a path toward the Moon.

The flight test, which does not carry astronauts, will be a 42-day evaluation of the Artemis system including the launch vehicle and spacecraft in order to certify it for future Artemis missions that will take astronauts to the lunar neighborhood.