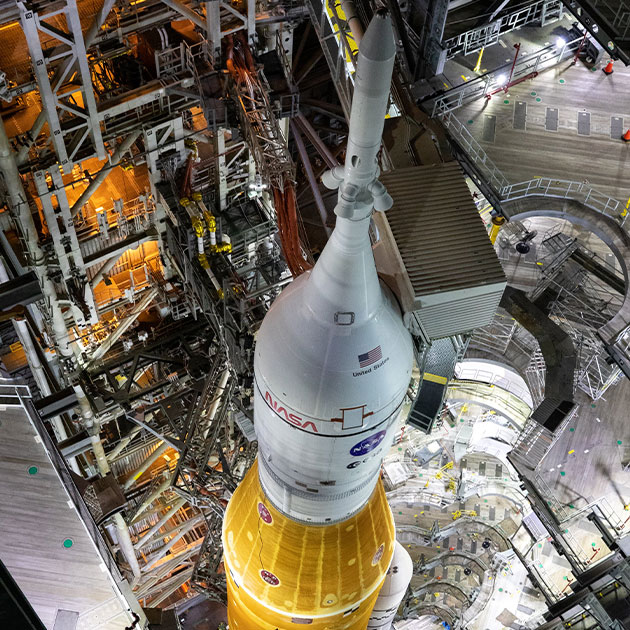 Artemis I stack, including the orange Boeing-built Space Launch System core stage, is seen in the Vehicle Assembly Building at NASA’s Kennedy Space Center in Florida. The SLS launch vehicle is bigger than Big Ben (315 feet, or 96 meters) and the Statue of Liberty (305 feet, or 93 meters).

On Aug. 16, NASA’s first Space Launch System rocket and Orion spacecraft will begin rolling to the pad for launch on the Artemis I mission. Liftoff is scheduled for the morning of Aug. 29, with backup dates in early September.

Follow along with @BoeingSpace as the rollout begins at 9 p.m. U.S. Eastern time.

It’s a slow, careful process. Both the Big Ben-size rocket and its mobile launcher are carried on top of a crawler-transporter the size of a baseball infield. The Boeing-built SLS core stage alone is the largest single rocket stage ever built. The entire launch vehicle stands 322 feet (64.6 meters) tall and weighs 3.5 million pounds (1,587 metric tons) before fueling. 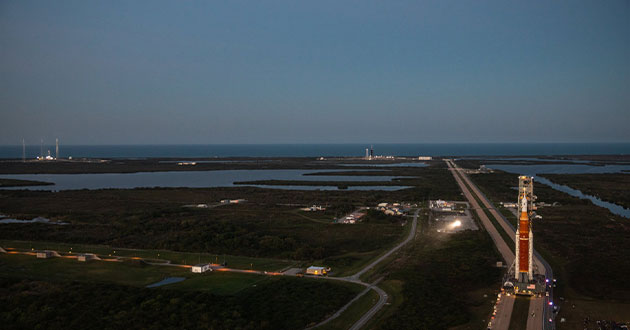 The Artemis I launch vehicle – seen here during a previous rollout for prelaunch testing – will stand at Launch Complex 39B poised to launch a mission to the moon while technicians make final connections and perform systems tests.

The roughly four-mile (6.4-kilometer) journey from the Vehicle Assembly Building to Launch Complex 39B at Kennedy Space Center in Florida will take about 11 hours. The slow parade travels along a crawlerway laid up to 1 foot (30 centimeters) deep with vibration-reducing river rocks. NASA, Boeing and partner teams will monitor every second.

Rollout is the first step of a complex mission that will send the Orion spacecraft on a 1.3 million-mile (2 million-kilometer) journey around the moon and back. Artemis I will lay the foundation for increasingly complex missions that enable sustainable exploration of the moon and eventually Mars.

For Alexsandra Olaya-Garcia, launch integration manager for Boeing’s SLS Launch Operations team, rollout is a cause for celebration. Her team has completed hundreds of checks and tests, including countdown simulations and integrated verification tests, all with safety and quality top of mind. She said this rollout feels different than the rollout for the first integrated fueling test in March, even though the steps are the same. We’re on the precipice of launch.

“Some of us might shed a couple tears when the rocket rolls out one final time to the launch pad,” Olaya-Garcia said. “It shows not only how much work we’ve put in over the past years but also how much we’ve grown professionally and personally.”

The team is ready for whatever technical challenges or weather may arise with the rocket on the pad. Olaya-Garcia said lightning is very common in the area this time of year, but three lightning towers set around the launch pad should protect SLS and Orion. 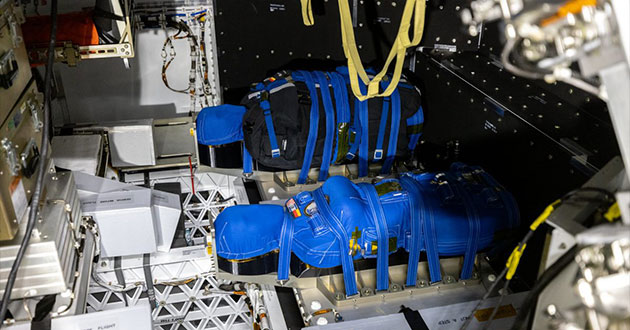 Two model human torsos are installed in the passenger seats inside the Artemis I Orion crew module atop the Space Launch System rocket.

Although the Artemis I mission will carry no crew, it will carry a manikin named Commander Moonikin Campos and two model human torsos to record mission data. Artemis II and beyond will carry astronauts, including the first woman and first person of color to walk on the lunar surface.

These missions will expand scientific discovery, economic benefits and inspiration as humans return to the moon, this time to stay.

Learn more about the SLS and its mission on Boeing's Artemis I website. 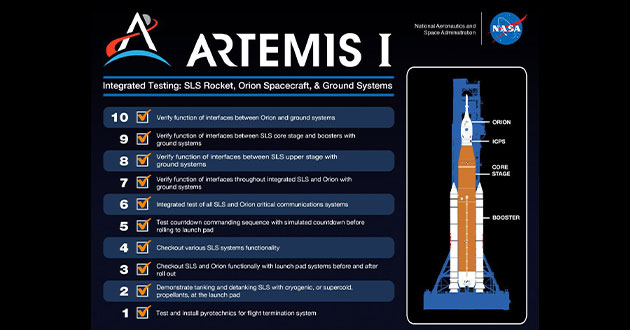