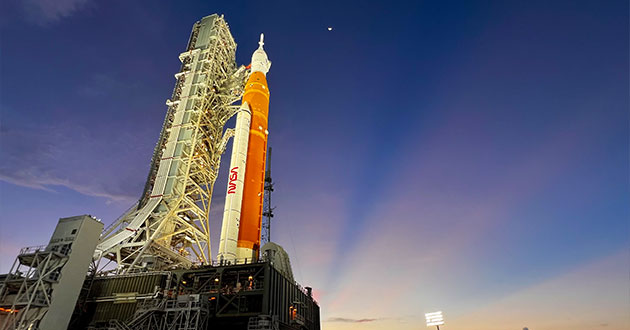 The orange color of the Space Launch System core stage reflects the early morning sunrise at Kennedy Space Center in Florida on Aug. 22, as the Flight Readiness Review began.

NASA and contractor teams including Boeing conducted an in-depth technical review Monday before declaring the Space Launch System rocket and Orion spacecraft ready to perform the Artemis I mission to lunar orbit. Launch is targeted for Aug. 29 with a liftoff at 8:33 a.m. eastern time. There is a 2-hour launch window to begin the uncrewed flight test.

Known as the Flight Readiness Review, or FRR, the analysis provides program leaders, engineers, and industry representatives a final opportunity ahead of the countdown to evaluate the condition of the vehicle and its myriad systems.

“The FRR is really a chance to take a close look at this integrated launch vehicle as we move into the countdown,” said John Shannon, Boeing’s SLS program manager.

The daylong meeting kicked off launch week for the inaugural Artemis mission which aims to be the first in almost 50 years to send a human-rated spacecraft into lunar orbit. A flight test without a crew, the Artemis I mission calls for the Boeing-built Space Launch System core stage to catapult NASA’s Orion spacecraft from Launch Complex 39B to Earth orbit. An upper stage from United Launch Alliance will kick in afterward to give Orion enough speed to escape Earth’s gravity and cross the 240,000 miles to the Moon.

Orion is expected to spend about six weeks in space as it heads out to the Moon, maneuvers through several orbital paths and then heads back to Earth. Orion is to cap the Artemis mission with a splashdown off the coast of California. The flight is designed to prove the integrated launch vehicle and spacecraft plus their systems ahead of astronauts making a similar trip aboard the second Artemis mission.

The mission is a flight test meant to stress the spacecraft in terms of endurance, radiation and micrometeoroid exposure, said Bob Cabana, NASA associate administrator. For example, Orion was designed for a 21-day mission but will be in space for 42 days. The data from the mission will be a critical element for future Artemis missions.

All of the Artemis flights are meant to shape a path for sustained human exploration of the Moon throughout the decade. SLS is also designed to power missions beyond the Moon in the future, including those to take astronauts to Mars.