At Kennedy Space Center’s Launch Complex 39B in Florida, the most powerful rocket in the world stands in wait. That anticipation will turn to action on Aug. 27, when the 45-hour Artemis I mission countdown begins. The launch team has prepared for this moment with hundreds of tests, including four fueling and countdown “wet dress rehearsals.” Even though Artemis I is a flight test, this is no practice run.

When the clock hits T-0 on Aug. 29, NASA’s Space Launch System will launch the Orion spacecraft to the Moon, paving the way for humanity’s exploration of deep space.

Jason Grow, lead propulsion engineer for the Boeing-built SLS core stage, will be watching the countdown data come in and communicating via headset with NASA and his Boeing colleagues.

“Boeing has been partnering closely with NASA for years on the development of the core stage,” Grow said. “That doesn’t change when the clock starts. We’ll be there every step of the way, ready to provide any support needed.”

Though the core stage has been tested by itself and as part of the integrated SLS, the countdown to launch feels different to Grow.

“It’s hard to believe we’re here,” he said. “The core stage has tested beautifully. I’m confident, but I know I’ll be feeling that anxious excitement as the clock counts down.”

Nearby at the Press Site, offering expertise for news media, will be Kristine Ramos. She’s a former SLS engineer turned Business Development lead.

“It’s easy to get stuck in the weeds when you work on something every day,” Ramos said. “But as the minutes to launch grow closer, I’m realizing that we’ve built something truly magnificent. I can’t wait.”

The two-day countdown, including planned holds, contains "L minus” and "T minus" times. "L minus" indicates time until liftoff. “T minus” is a sequence of events that are built into the launch countdown. 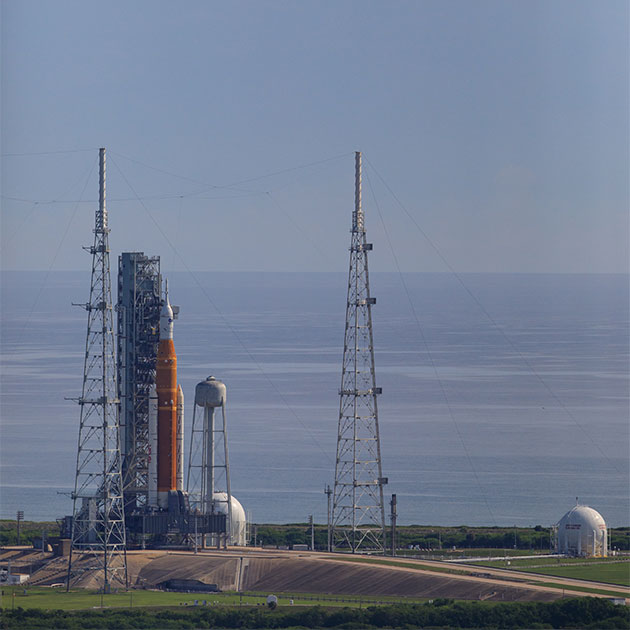 Five T-38s from NASA's astronaut corps fly over the Artemis I launch vehicle as it stands at Launch Complex 39B at NASA's Kennedy Space Center in Florida.

Here’s a simplified look at what will happen during those crucial hours:

If any issues occur during countdown that are not resolved in time for launch, including bad weather, the next launch attempt will be Sept. 2.

With a successful liftoff, SLS will travel at a maximum speed of 22,000 mph (35,200 kph), sending the Orion spacecraft to the Moon and officially marking the powerful rocket’s place in the history — and future — of space exploration.

“This uncrewed test flight is just the first step,” Ramos said. “With this advanced technology in place, progress will be fast. Where we’ll go, what we’ll explore and all we’ll learn from this point forward — wow! — there’s truly no limit.”