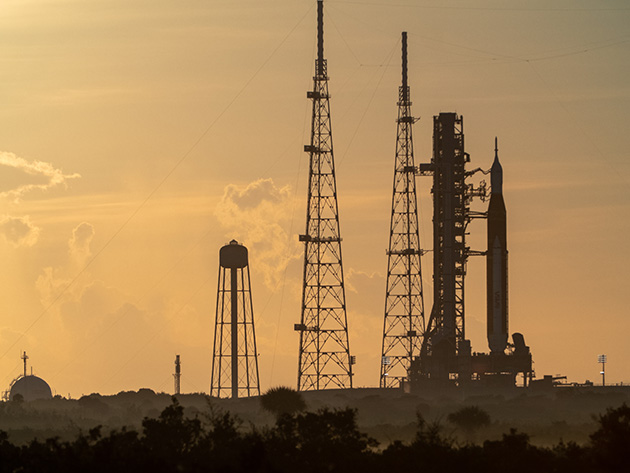 The Artemis I rocket is seen at sunrise as NASA's Kennedy Space Center in Florida, awaiting liftoff on a mission to the Moon.

Weather watchers may prove the most popular people at NASA’s Kennedy Space Center in Florida on Saturday as NASA and its industry partners, including Boeing, work toward an afternoon liftoff for a mission to orbit the Moon.

Launch is set for 2:17 p.m. Eastern time – just inside the afternoon timeframe when thunderstorms have erupted over the Florida Atlantic coast in recent days. Forecasters call for a 60% chance of acceptable conditions during the window.

The launch team has two hours to see the Artemis I rocket lift off from the launch pad, perhaps enough time to wait out any showers that develop. There are multiple weather restrictions that can affect a launch. The rules, known as launch commit criteria, cover everything from rain and lightning potential to cloud thickness and even temperatures on what is the first flight test of the integrated rocket and spacecraft.

For example, meteorologists have to call off an attempt if the flight path will take the rocket within 10 miles of a cumulus cloud.

Saturday’s attempt will be the second try for the Artemis I mission. NASA waved off an earlier attempt for technical reasons.

As the inaugural flight of the program, the Artemis I mission is an uncrewed flight test designed to prove both the Space Launch System and, in NASA’s words, stress the Orion spacecraft on a 37-day mission to orbit the Moon and back to Earth. Later, the second Artemis mission will carry a crew on a mission orbiting the Moon. The third mission is slated to land astronauts on the Moon and successive flights are meant to provide a sustainable architecture for continued lunar exploration.

The launch will be shown on NASA TV. Follow the countdown and highlights at @BoeingSpace.

Learn more about Artemis I on Boeing's mission website. Read past feature stories about the Space Launch System.