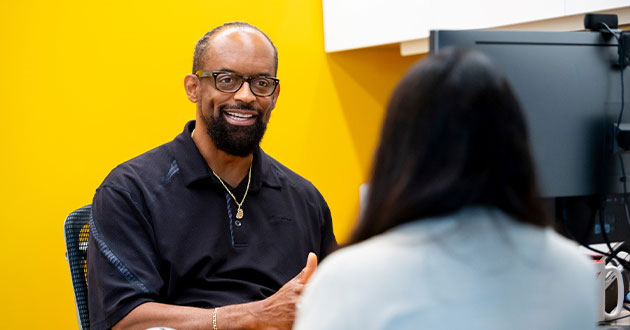 Norris Roberts, a compliance project manager for defense cybersecurity requirements, took on the role of caregiver when several members of his family experienced critical illnesses simultaneously.

Roberts recognizes the audits he conducts can be viewed as stressful and intimidating by auditees. He recalls a project where a large number of software systems were noncompliant, which led to an unusually high backlog of programs.

Roberts helped lead a cross-functional team to create a plan of action. He used the Seek, Speak & Listen habits he developed through his caregiving experience to understand the concerns of his teammates, navigate the uncertainty of the situation, and manage the high-level of urgency to bring the programs up to standard and meet deadlines.

“I introduced the ‘three C’s:’ Care, cope and conquer,” Roberts said. “When your teammates know that you care about them and you’re listening, you’re able to cope as a group and work together to conquer situations, especially newly discovered issues that require everyone’s input to resolve.”

While balancing an intense work schedule and caring for his elderly parents was a challenge, Roberts committed to keeping a positive outlook for his family and for himself. Through the experience, he became more aware of his communication skills, as well as his time management and organization.

“My father-in-law was diagnosed with heart disease; my father’s diabetic condition had progressed to a chronic stage, and my mother developed Alzheimer's disease around the same time,” Roberts said. “It was heartbreaking to watch my family members experience the effects of these conditions, especially my mother’s memory loss. I wanted to do everything I could to help them.”

Roberts found writing about his experience comforting. This led to Roberts creating a series of books about his journey, which he dedicated to caregivers and their loved ones. The writing process also helped him connect with his mother during the progressive stages of Alzheimer’s. As he talked about memories of their life to include in his writing, on rare occasions, she was able to recall special moments over Sunday dinners.

Since his mother’s death and later the death of his father, Roberts continues to be an advocate for people with Alzheimer’s as well as caregivers. He often shares his experiences to encourage others.

“In every aspect of my life, I strive to support people,” said Roberts. “Whether it’s in our work or personal life, we can learn from shared experiences. Through my journey, I’ve learned that my purpose is caring for others.”