Aaron Sumner’s perspective on life deepened at the hooves of a horse named Shiloh.

Nearly three years after his riding accident, Sumner continues to strengthen his focus on others, including his teammates across Boeing’s Missile and Weapon Systems division. 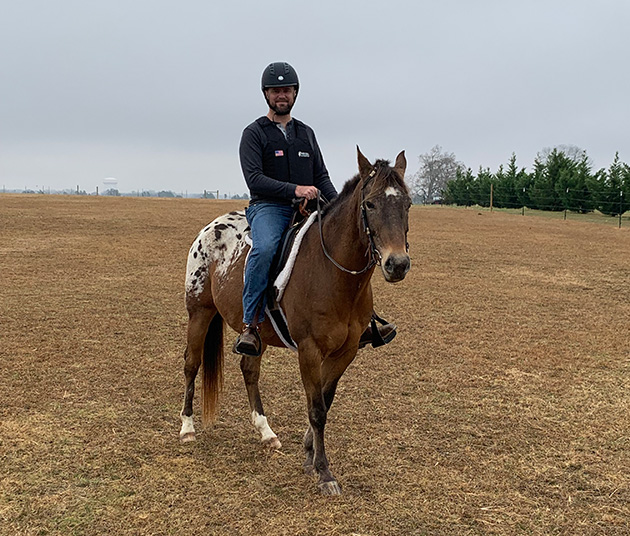 After his life-changing accident, Boeing employee Aaron Sumner continues to ride his horse while wearing a helmet and protective vest.

“You never know what someone is going through. I believed that before, but now I’ve lived it,” said Sumner, who supports programs such as Ground-based Midcourse Defense.

“Whether it’s a family member, neighbor or colleague, I try to notice when they’re going through a hard time and do what I can to provide support.”

On a spring morning in 2020, that ability was tested as he rode his horse at his family farm in Union Grove, Alabama. The farm had visitors that day, disrupting the normally quiet environment. Sumner felt a change in Shiloh.

He got off the horse, adjusted the saddle and started to climb back on. But Shiloh was still uneasy. With one leg in the stirrup, the horse took off running, violently bucking four times and launching Sumner over 12 feet (3.7 meters) in the air.

Sumner crashed into a nearby hill, breaking his back in five places and ripping the cartilage in his shoulder. His helmet was split in half, but it ultimately saved his life.

“When I saw my helmet, it really put the other injuries into perspective,” he said.

After three months of medical care and physical therapy, Sumner was moving around with the help of a back brace, walkers and canes. He felt well enough to apply for a role as a proposal manager for Missile and Weapon Systems — a team he’d grown to respect for their reputation as being knowledgeable and innovative.

“Joining a new team is always nerve-wracking — especially considering when I joined — but what I’d heard was true. This team knows their subject matter,” he said. “And they were more than willing to share that knowledge.”

As a proposal manager, Sumner works closely with his team and subject matter experts to research, prepare and deliver detailed proposals to customers.

“I’m very aware of the energy I bring to my team,” Sumner said. “There have been times when I really needed and appreciated that uplifting co-worker, so I strive to be that for others.”

Sumner said his accident inspired him to continue looking outward, both at work and in his personal life.

An active volunteer prior to the accident, Sumner has grown especially passionate about improving accessibility: He builds wheelchair ramps throughout his local area. He also advocates for the use of helmets and safety vests in equestrian activities.

And he got back on that horse, riding as often as he can.

Though Sumner said he’s grateful for how much he’s improved, he knows the accident, for better or worse, will always be with him.

“It taught me some real life lessons. First, always wear a helmet. It saved my life,” he said. “It also taught me not to take my life and health for granted. I can still do so much good. And as long as I’m well — physically, mentally and emotionally — I will help those who aren’t.”