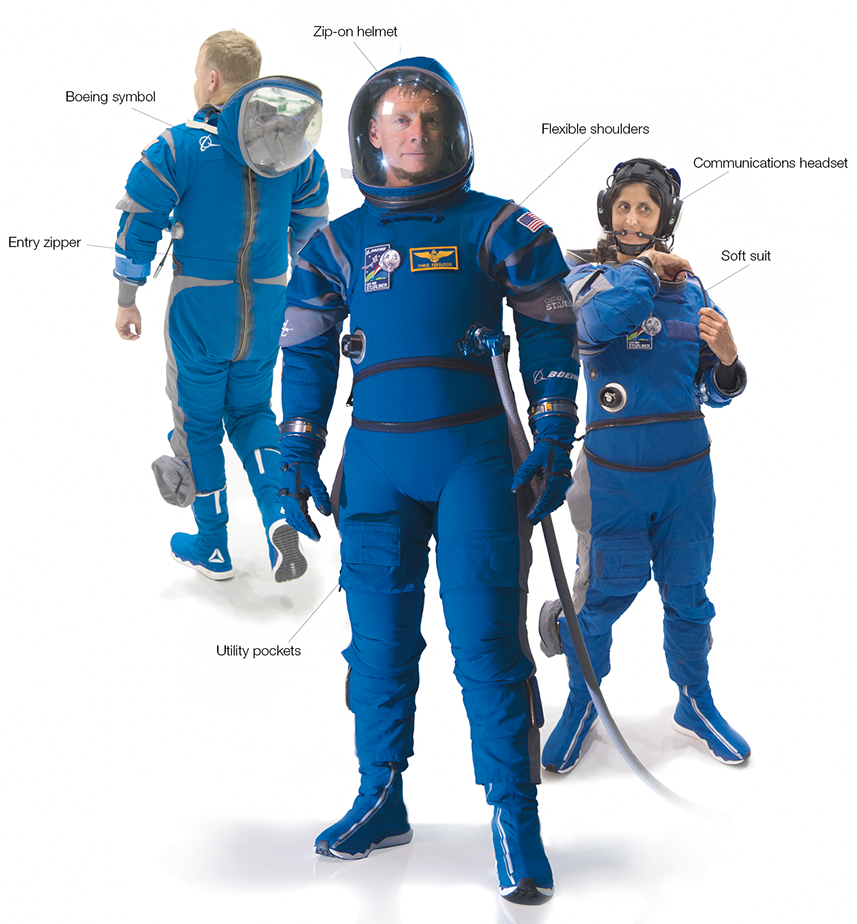 From Project Mercury to the space shuttle program, astronauts riding on American vehicles pulled on spacesuits that were silver, white or orange, and enormous. People practically waddled when they wore them.

Yet when space travelers are outfitted for the first crew flight aboard the Boeing-built CST-100 Starliner in 2018, they will go dressed as no other orbiting humans have before.

While losing none of the safety features required for spaceflight, the recently unveiled Boeing Ascent/Entry Suit, or AES, is more elegant and flexible than previous suits, said Chris Ferguson, Boeing director of Starliner Crew and Mission Systems and a former space shuttle commander. 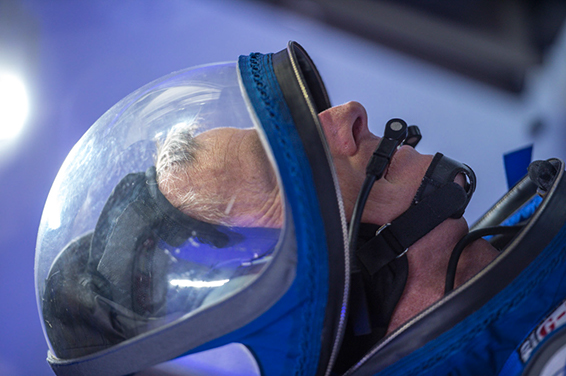 It’s more aesthetically appealing and it’s not as bulky. It is comfortable to wear. It’s a suit that will get Starliner astronauts home.

Blue, of course, is Boeing’s dominant color and one that matches several elements of the Starliner’s cabin interior. Astronauts will wear the dark-colored, form-fitting suit during launch, ascent and re-entry. They will sport either a Boeing logo or a NASA insignia patch—depending on whom they represent—on the right shoulder, an American flag on the left, and Starliner and name patches across the front of the suit. Permanent logos are sewn into the fabric while missionspecific emblems attach by Velcro.

The leaner look is a byproduct of a Starliner spacesuit that is 20 pounds (9 kilograms)—and 12 pounds (5 kilograms) without accessories—which is significantly lighter than previous pressure suits, said Alex Diaz, Boeing systems engineer and Associate Technical Fellow.

Teams were tasked to make the Starliner more streamlined throughout to improve mission efficiency, and the spacesuit was not exempt from this request, Diaz said.

“Our marching orders were to reduce the weight and the bulk,” he said.

To shed pounds, Starliner astronauts will wear a soft helmet rather than a hard one and don protective leggings, which direct blood flow to the heart, rather than rely on inflatable pressure bladders sewn into the spacesuit fabric.

The David Clark Co. of Worcester, Mass., manufactured the Starliner suit, using input from a Boeing team that consisted of Ferguson, Diaz and others. Clark also has provided spacesuits for NASA and high-altitude pressure suits to the U.S. Air Force.

The Boeing spacesuit’s primary function is to protect the Starliner astronauts against cabin decompression during launch and return to Earth, or from a toxic-environment situation such as a fire, Ferguson said.

The spacesuit is an evolution of what was once worn by U-2 aircraft pilots and Gemini astronauts in the 1950s and ’60s. It was designed to be lightweight and to have low bulk for storage, a low thermal burden and a minimal amount of hardware, Diaz said.

The soft helmet, a type of helmet also used by the Gemini program, resembles a hooded garment. A polycarbonate visor features various coatings to protect against glare and scratches and to provide an anti-fog surface. When the visor lifts up, a crew member breathes cabin air while a supply source pumps air into the body of the suit for cooling; flip the visor down and turn a valve, and the breathing air gets redirected through the suit to the person’s head.

The visor, the only part of the helmet that provides a hard surface, is larger than those used in previous space missions.

Astronauts wear a communications headset beneath the soft helmet, connected by a cable that runs inside the suit and down the torso before it exits externally. Outside of the suit, it connects by another cable to a headset interface unit, or HIU, that has volume control features, a push-to-talk switch and a voice-adjustment switch.

Loops or straps located around the neck area of the suit assist in zipping up the helmet or are used as an aid should rescue workers need to remove an incapacitated astronaut from the capsule after landing.

The suit is built in layers. The first consists of Gore-Tex fabric, not available commercially, that is referred to as a “gas container;” it allows water vapor, but not air, to pass through. A second layer, called a restraint cover, is made of lightweight Nomex material that is fire-retardant, abrasion-resistant and high-strength.

“Imagine a balloon that contains gas; that’s the first layer,” Diaz said. “Another layer, the restraint cover, gives the spacesuit its shape.”

The suit receives “gas” from a fan package; a controller maintains pressure to a certain level. If that level is exceeded, the controller opens and permits the suit to vent. If the controller remains closed, a relief valve located on the upper thigh protects against over-pressurization, Diaz said.

The Boeing spacesuit is considered an intravehicular activity, or IVA, suit to be worn only inside the Starliner. An extravehicular, or EVA, suit is used when working in a harsh environment outside the spacecraft and requires thermal as well as micrometeroid and orbital debris protection.

The final Boeing spacesuit design required a significant amount of give and take from those who provided input. A blue and white suit was considered but it wasn’t as cost-effective as one that was all blue. Only features that were absolutely necessary were incorporated, Ferguson said. Above all, crew safety was a guiding factor, leaving no room for shortcuts. 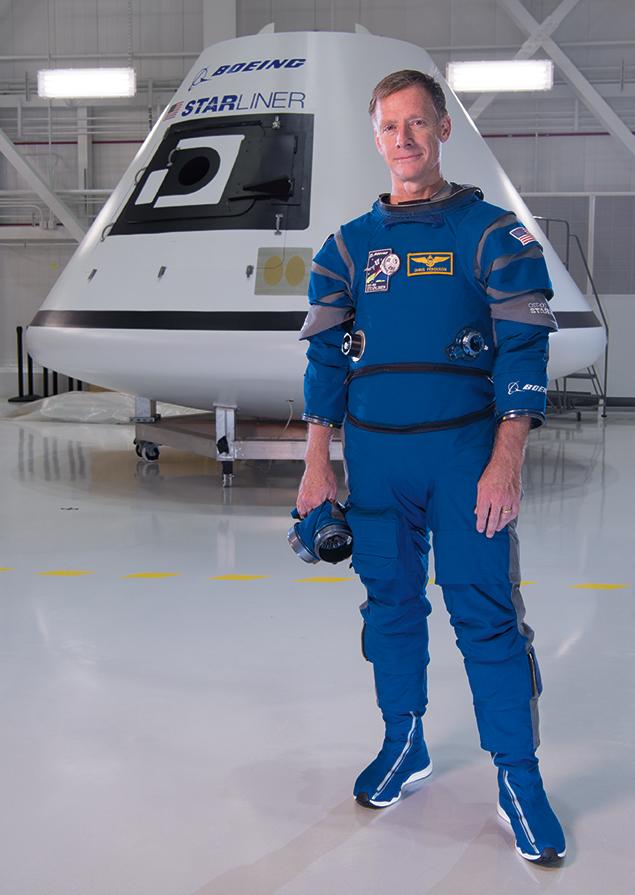 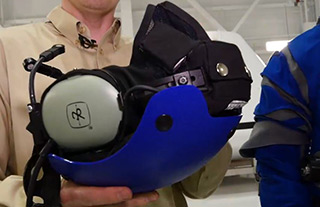 Mobility joints in the shoulders and elbows allow for ease of movement even when the suit is pressurized. 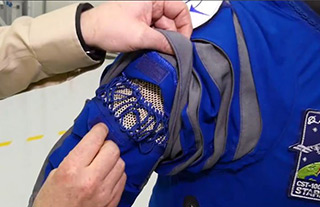 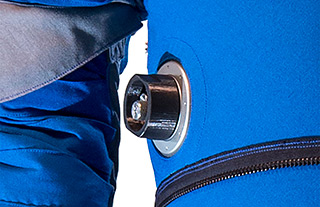 COMFORT WHEN SITTING OR STANDING 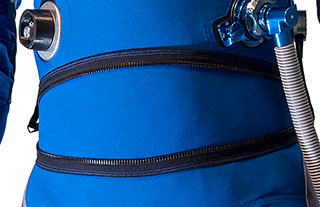 The suit has breathable leg pockets to hold a survival kit and personal items. 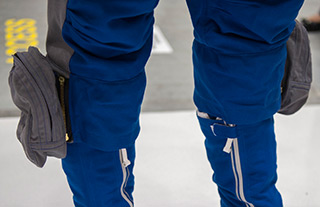 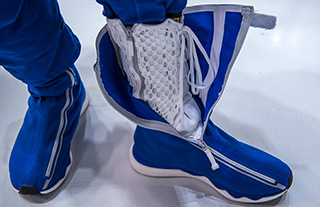 Lightweight, leather gloves are enabled for tablets and touch screens. 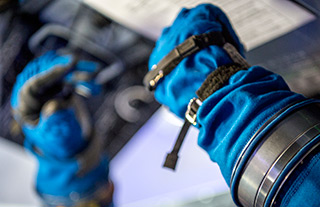 The airflow diverter valve helps keep astronauts cool and comfortable, while permeable layers allow water vapor – but not air – to pass through the suit fabric. 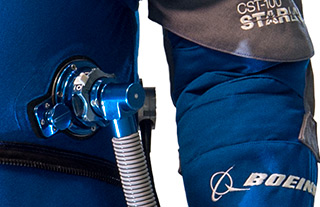 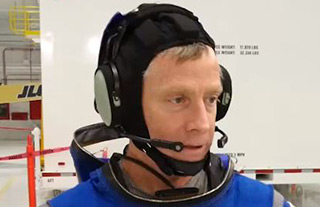 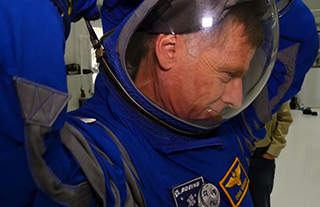