The concept of the checklist is so simple, and is used in so many ways today that talking of “critical” checklists does not leave much of an impression. Incorporating checklists in high-hazard environments has been one of the most influential innovations to enhance safety in recent times.

The defining moment leading to the innovation of using a formal checklist occurred in 1935.

The Army Air Corps was to award a contract to build its next-generation long-range bomber, and three companies were bidding for the contract: the Douglas Aircraft Co. with the Douglas DB-1, the Glenn L. Martin Co. with the Martin 146, and Boeing with the Model 299. The 299 flew farther and faster, and it carried more payload than either of the other two entries. It was acknowledged that the advanced, sophisticated Boeing four-engine airplane was the inevitable winner. The Army had already planned to order at least 65 of Boeing’s aircraft, once the formalities of an official flying demonstration were completed.

On Oct. 30, 1935, at Wright Airfield in Ohio, the Model 299 lifted off, climbed to 300 feet, then stalled and crashed killing two of the five crew members, including the pilot. An investigation determined that pilot error caused the crash. While tending to the airplane’s multitude of switches and controls, the pilot forgot to release a new locking mechanism on the airplane’s elevator controls. Critics declared that the Model 299 was “too complex to fly.”

Boeing initially lost the contract, but some remained convinced that the aircraft could be safely operated. A group of Boeing engineers and test pilots developed a simple approach: They created a pilot's checklist with critical action checks for taxi, takeoff and landing. They believed that this airplane was not too complex to fly, but was too complicated to be left to a pilot’s memory.

A technicality in the selection process allowed Boeing to build and test another 12 Model 299 aircraft. With the checklist in hand, Boeing and Air Corps pilots went on to fly the initial 12 airplanes a total of 1.8 million miles without an accident. The Army ultimately ordered almost 13,000 of the aircraft, which were designated the B-17 and gave the Allies an air advantage in World War II as they helped carry out a devastating bombing campaign across Nazi Germany.

The checklist became a permanent and mandatory tool, for both routine and emergency conditions, to be used by all pilots in the Boeing fleet, in all of military aviation, and soon after in commercial aviation as well.

This paper examines the use of checklists in various high-risk environments, and pre- and post-checklist implementation comparisons. We will also discuss human factors studies that form the foundation for the use of checklists, as well as draw parallels between what implementation teams in other fields have discovered when integrating checklists and the positive impact checklists can have on safety. The issues examined and conclusions documented can be used to support the development of critical checklists throughout any industrial application.

The following categories are indicative of the multiple uses of checklists:

Each of these different uses has a particular purpose, and each has value and meaning as intended. While the use of checklists is present in almost every industry, extensive studies examining their effectiveness and the science of how to develop effective checklists are almost nonexistent ex­cept in the medical field, nuclear power and aviation industry. Our primary focus in this paper is to examine the effectiveness of prevention checklists in these industries.

For example, in only the last two decades has the medical industry adopted a serious stance in preventing surgical errors by widespread adoption of using checklists.

In response to a shocking study published in 2000 that reported an estimated 44,000 Americans died each year as a result of preventable medical errors, a medical team at Johns Hopkins Hospital introduced several improvements, included and guided by a checklist termed the Comprehensive Unit Based Safety Program.

The program resulted in reducing what is known as central-line associated bloodstream infection, a life-threatening condition, to nearly zero over four years. The Johns Hopkins results has led other medical institutions to implement similar patient safety programs. Additionally, in 2008, when the World Health Organization deployed its Surgical Safety Checklist program, various health care systems, cultures and operating venues reported a 53 percent reduction in postoperative mortality and a 64 percent reduction in in morbidity.

a. The use of checklists will not eliminate all accidents in the lab, test facility, production line or wherever they are implemented. Accidents will still happen even when users make decisions consistent with best practices because risk cannot be completely eliminated.

b. Training classes and feedback can positively change personal behavior. Practical issues encountered during the implementation of checklists can be minimized by effective training.

c. All employees must make decisions as to what steps, if any, they need to take based on a mental representation of the factors known or hypothesized in the ever-changing or semi-constant state of their equip-ment at any given point in time.

d. “No repetition of incidents” must be a guiding principle, and if an incident occurs it is necessary to learn from it to prevent the same incident from happening in the future.

e. Internalization and generalization is central to the process of change. A change in communication can get people talking about safety differently than they communicated before an effective safety awareness program was implemented.

f. Emphasis must be placed on the importance of checklist use with reminders of situations where deviations from checklists occur and how they can be misused.

2. Organizational changes that support checklist use

a. It is crucial that performance evaluation and theoretical rhetoric proclaim the same message.

b. Engaged senior leadership is essential to sustaining a culture of safety and the involvement of all levels of staff is critical to a successful safety and checklist initiative rollout.

Figure 1 - The WHO Surgical Safety Checklist 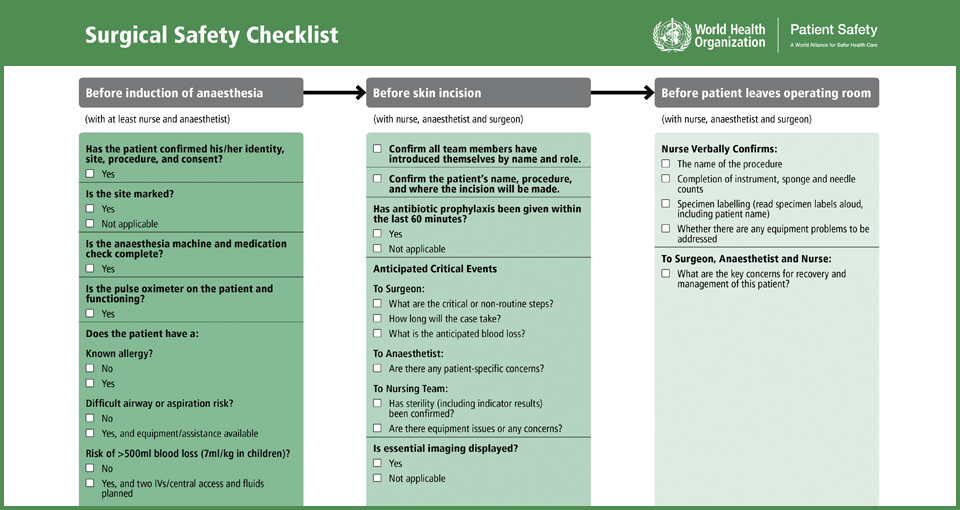