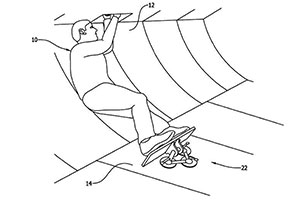 This brace tool is a rigid frame of sufficient strength to hold the weight of a person.

Performing overhead work, like installing headliners and cargo sidewalls above an inclined surface or near the top of a curved surface, requires whoever is doing the work to constantly reposition themselves after sliding down. This is not only fatiguing and time-consuming, but it can result in muscle and joint strains because the person could end up positioning themselves in improper ergonomic posture to complete the work.

This recent Boeing patent describes how to prevent a person from sliding down an inclined surface as they perform overhead work. This brace tool is a rigid frame of sufficient strength to hold the weight of a person. A platform is mounted to the frame and can be adjusted relative to the frame. Suction cups are secured to the bottom of the frame.

The brace tool is positioned and the suction cups are locked into place on the inclined surface. The person performing the work can then stand or kneel on the platform before releasing the brace tool to move to a different area to work. This new tool provides a comfortable, safe and ergonomically correct environment for performing overhead work on an inclined surface while saving time and preventing unnecessary exertion.

Traveling is hectic. Traffic to the airport is crazy. Lines at ticketing and security are long. And sometimes your connection is on the other side of a huge airport. Airlines and their passengers need to be able to communicate with each other seamlessly.

This recently published patent application, which is based on a European application, describes a system and com­puter-implemented method that enables a collaborative exchange of information between passengers and an airline operation center. This invention describes how to compute the likelihood of missing a flight or connection based on the knowledge of passenger location, flight status, current average airport delay, and actual and planned inbound and outbound traffic.

First, a connection between a user’s electronic device and an airline data server is established. The user is identi­fied as a passenger for a departing flight at the airport. The passenger gets flight status, provides their actual location information and receives a probability indicator as to whether they will make or miss their flight.

Hydraulic robots are typically used in large-scale manufacturing. While humans and hydraulic robots can coexist and interact productively, safety is always a concern. Warning signs, safety protocols and fenced-off areas remind humans to be vigilant. While some robots have sensors that alert when someone or something is near, many fail to distinguish objects from humans and as a result may report an excessive number of false positives.

This recently granted Boeing patent describes a system that detects when a human is near a hydraulic robot. The system includes sensors and a computer. The sensor system distinguishes human skeletal positions from non-human object positions. The computer is configured to determine whether they are present in a predetermined area and determine whether a false positive has occurred. If the computer determines that a false positive has not occurred, then it will initiate an action, such as issuing an alert, or slowing or stopping the robot.

In another approach, the system can distinguish among different types of human movement. Instead of “motion recognition” that simply recognizes whether any kind of movement has occurred, this system uses “move­ment recognition,” which means it can recognize a specific movement. For instance, movement recognition can determine if the movement is acceptable (for example, a motion of feeding parts into a machine) or potentially unsafe (for example, a motion of someone walking by while talking on their phone).

Conventional food preparation methods require multiple space-consuming containers and appliances and are not substantially automated. Current ingredient dispensers and mixers typically cannot operate in low or zero-gravity environments that exist on the International Space Station or deep space missions. This newly issued Boeing patent describes a better way to automate food preparation in both terrestrial and extraterrestrial contexts that could be necessary for humans living in space.

Three distinct embodiments are described in the patent: 1) Flight payload version for low-gravity and space environments; 2) ground-based cook pot/freezer that can be used in widebody airplanes; and 3) single-serving, hand-held mug for either environment.

The apparatus is a cylindrical container with a cavity configured to store the food ingredients. Some versions use a mixing blade and a plunger. The blade mixes and moves the ingredients to the inside walls of the cylindrical container to allow thermal exchange via thermoelectric Peltier devices. The plunger remains stationary at the bottom end of the container until the food preparation is complete, at which time the blade is stowed at the front, and the plunger is used to draw the food out of the cylinder. The thermoelectric Peltier devices are mounted directly on the exterior walls of the cylindrical container with heat sinks that may be connected to a thermal loop to aid in dissipating thermal energy.

Not only does this method provide a way to automate food preparation in one container, but the apparatus can also be programmed to clean itself.

Magnetic levitation is a form of transportation in which a vehicle is moved without ever contacting the ground. In one application of magnetic levitation systems that is being planned for the future, a vehicle travels inside vacuum tubes to reduce and even eliminate aerodynamic drag on the vehicle. However, the tube might vertically deflect as the vehicle travels through it, and such deflections may be unsettling to passengers. Proposed solutions to reduce tube deflections, such as increasing the size and weight of the tube or decreasing the space between support columns, can require considerably more resources and may not be cost-effective.

This recently issued Boeing patent describes a system and method for reducing deflections as a vehicle travels through the tube. The system is composed of a suspension cable that extends between a first and second support tower or ground supports. The vehicle is configured to travel through the interior channel of the tube. A tension support member has a first end coupled to the suspension cable and a second end coupled to the vacuum tube through an actuator. The tension support member exerts force to pull the tube up toward the suspension cable as the vehicle goes by. The actuator thus reduces deflections of the tube by adjusting the tension force as the vehicle travels through the interior channel under the tension support member.

A suspension bridge design with actuated vertical members provides for stiff and effective support to transport tubes. Moreover, the design eliminates a need for a large number of supports connected to the ground, which not only is more economical but might allow for the tube to span over water.