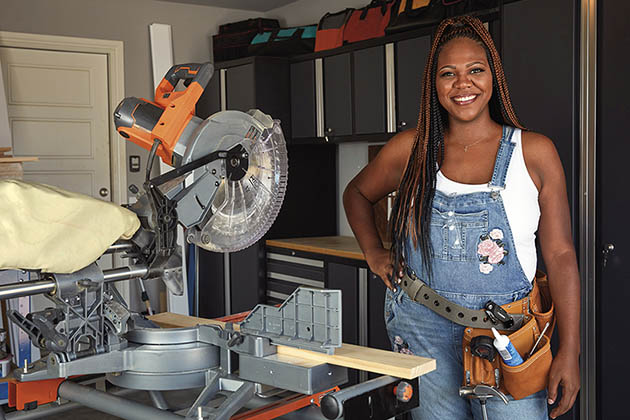 When she wanted the perfect kitchen table for her new house, she didn’t go out and buy one. She made one. With no woodworking experience, she essentially taught herself. She was surprised how well it turned out. “So I thought maybe I could build as a hobby,” she said. 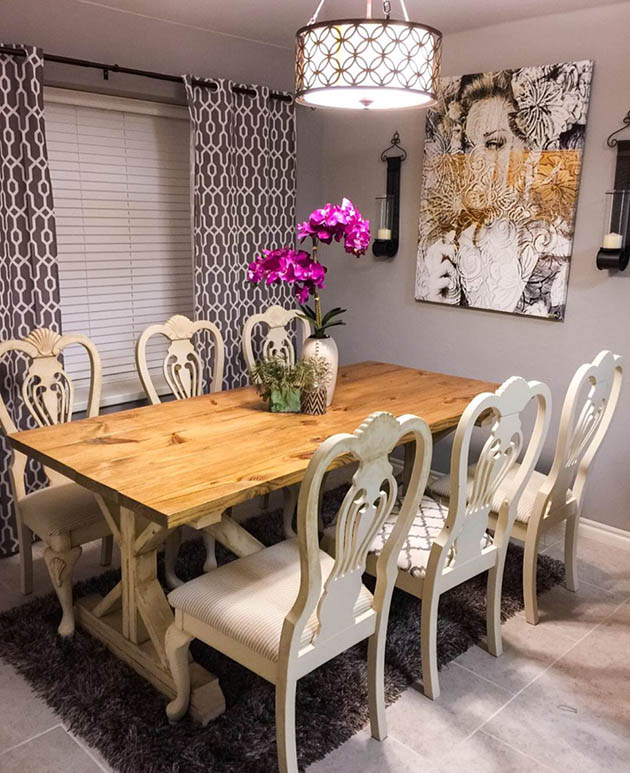 THE REST IS HISTORY: This table was Basnight’s first woodworking project and inspired her to build more than 50 pieces.

Her new hobby didn’t mean making merely a birdhouse or a cutting board. For Basnight, it meant more than 50 projects in her garage shop, including a one-of-a-kind sliding barn door media center, cabinetry in her kitchen and a 20-foot backyard deck.

As a software engineer for the Boeing B-52 program in Oklahoma City, Basnight found that her analytical mind fit right into the world of woodworking. She got so good so fast, she started a blog featuring her work along with tutorials to help other DIY diehards.

TV STAR: Ashley Basnight with hosts Amy Poehler and Nick Offerman on the set of NBC’s “Making It” in Los Angeles.

That connection with other woodworkers brought Basnight to the second season of NBC’s “Making It,” hosted by Amy Poehler and Nick Offerman. The show features builders competing for the title of Master Maker and a $100,000 prize. Though she didn’t win the cash, Basnight said the chance to create something from scratch, on deadline, was exhilarating. 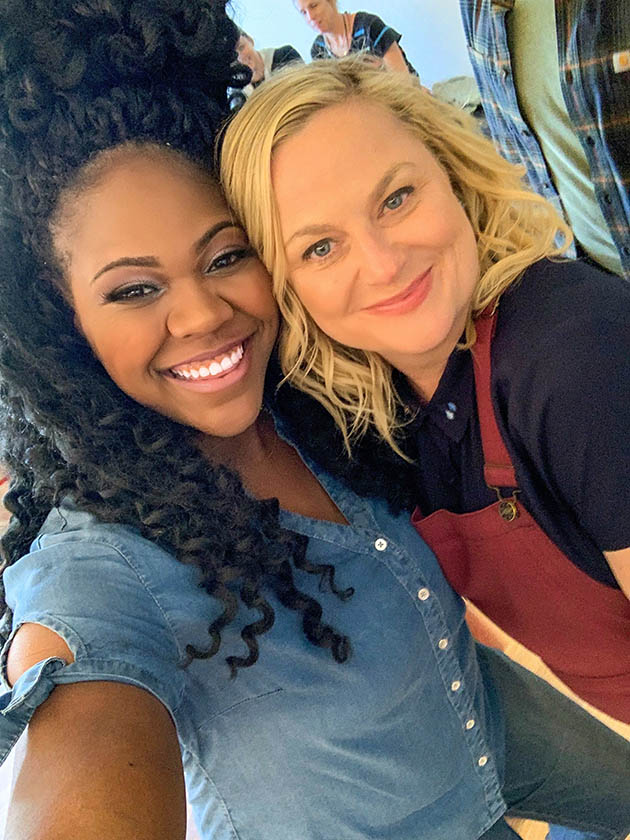 SELFIE WITH A STAR: Ashley Basnight with comedian/host Amy Poehler in Los Angeles.

The competitions often begin with Poehler and Offerman’s countdown, “Three, two, one, let’s make it!” And off the contestants go. “I got a total adrenaline rush. It forced me to think quickly on my feet during an intense situation,” she said, adding that she also experiences that deadline pressure as a software test lead and product owner for testing.

The complexity of computer science appealed to her innate inclination to push herself while growing up in Moyock, an unincorporated commuter town in North Carolina, just south of the Virginia border. She also watched as her aunt, Joycelyn Collins, showed what hard work and ambition look like. Basnight said Collins was a crucial early role model, working more than 20 years for Microsoft. She introduced her niece to the world of engineering.

“We have a lot of mathematically inclined members of our family, and Ashley was always curious about the work I was doing,” Collins said. “So while I might have helped inspire her to enter the engineering world, Ashley did the work herself and was always extremely motivated to keep pushing forward.”

Basnight attributes part of that motivation to her aunt. “She is super successful, and watching her made me more interested,” Basnight said.

At the time, Collins was also one of the few Black women whom Basnight saw in a technology career. “That made it even more intriguing to learn and get into a field where I don’t see many people who look like me.”

Like her aunt did for her niece, Basnight is honored to lead a path for other Black women to consider engineering as a career.

“I feel like I can be an inspiration,” she said. “When there are things people don’t normally do, sometimes they may be scared, or they may be wondering, ‘Can I do this?’”

That, more than anything, is why Basnight runs toward a challenge. “Going into this field provides an example for others to show it is possible. It’s a demanding career, but it’s worth it when people come up to me and say, ‘Seeing you in engineering makes me more interested in it.’”

Her Boeing career began in college. While earning a Bachelor of Science in computer science from Elizabeth City State University in North Carolina, she landed an internship in 2012 at a Boeing facility in Wichita, Kansas. Less than a decade later, she is a member of the software sustainment team for the B-52 program in Oklahoma City.

At times in her career, Basnight has been the only Black engineer on her team. She sometimes felt she had to outperform to repeatedly prove herself. “I wanted to make a good impression so people would be open to more women-of-color engineers, setting the stage for others,” she said, noting that her hobby offers a similar opportunity for change. “Engineering and woodworking are kind of the same in that woodworking is male dominated. More women are getting into it, but people are still surprised when I say I build things. I want to show women we can do it. We’re just as strong. We have the same abilities as men. We can still build things.” 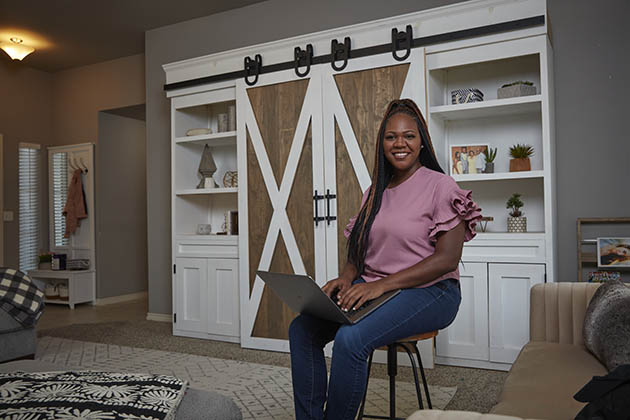 WOOD WORLD: Basnight often writes her blog surrounded by her work. She made just about everything behind her, including the sliding barn door media center, the coat rack in back left and the magazine rack on the right.

Although Basnight was eliminated in the third episode of “Making It,” she is thankful to have participated. She feels her engineering skills helped her on the show.

“When you’re in a timed challenge on TV, you have to think fast on your feet,” she said. “There were a couple of times where, the design I had in my head, where I realized it wouldn’t work out. I’d have to do calculations on the fly and use my math skills. The engineering side of me kicked in.”

She uses those skills every day on the job and has spent her entire Boeing career working with the B-52 program. She credits her longevity to being part of an Agile engineering team, one that divides big challenges into measurable chunks of work. “You’re constantly reassessing as you go,” she said. “It creates an opportunity to identify challenges more quickly.”

Working with her team of about 90 people allows for more and tighter collaboration. They meet in scrum teams every day to answer three questions: What did you do yesterday? What do you plan to do today? What are any impediments you’re experiencing? These consistent check-ins foster efficiency. The teams are also closely aligned as they sprint toward deadlines. “And we can talk to the customer on a consistent basis. It allows us to deliver more of what they want,” Basnight said.

She feels blessed to get to live her two passions: engineering and woodworking. She looks forward to going to the lab and seeing her handiwork come to life. “It’s so cool to be able to say, ‘Hey, I coded this page’ that will end up on a huge, military airplane,” she said, adding that she gets the same charge out of the start-to-finish of a new project in her garage. “It’s hands-on and taps into my creative side. I can customize. And the engineer in me comes into play with the measurements and calculations and determining how a piece works in a space.”

She also recently sold that table that launched her woodworking career, making room in her kitchen and in her life for whatever new adventure is on the horizon.

That horizon is sure to include countless lines of code, splinters and Basnight’s relentless dedication to perfection. She is motivated by the countdown in her head, “three, two, one, let’s make it!” In many ways, she already has.

Basnight: ‘Now is the time for change’

As a young African American women in the engineering field, I always found it somewhat difficult finding my footing in the workforce, navigating a place where I didn’t see many individuals who looked like me. As the years progressed, I learned how to find my purpose and voice at Boeing, but I also experienced trials and adversity within that process. I believe these experiences further heightened my desire to be an advocate for African American individuals and led me to be passionate about the Black Lives Matter (BLM) movement and equality in the workforce.

BLM recently found a place in corporate America after the death of George Floyd, an unarmed Black man in Minnesota. Most have seen the video of a police officer kneeling on the neck of Floyd, for more than eight minutes, while he pleaded, “I can’t breathe.” This prompted a wave of statements from organizations expressing solidarity and a commitment to addressing systemic racism. Although events like this have happened before, this one seems different compared to others related to police brutality. Though true equality has yet to be achieved, now is the perfect time for change. I’m hopeful that change will happen.