The Boeing T-7A Red Hawk advanced trainer is taking an unprecedented digital flight path. Designed, developed and manufactured on a digital foundation, it is the first program acquired as part of the U.S. Air Force digital eSeries initiative. U.S. Secretary of the Air Force Barbara Barrett announced the initiative during remarks at the 2020 Air Force Association Air, Space & Cyber Conference, which was held virtually due to the COVID-19 pandemic.

“By lowering development costs, barriers to entry are reduced by establishing digital prototyping — problems are identified and solved quickly and timetables are collapsed,” Barrett said. “The first ‘eSeries’ designator is awarded to an aircraft that was designed, built and tested using digital engineering: the T-7A, the Red Hawk.” 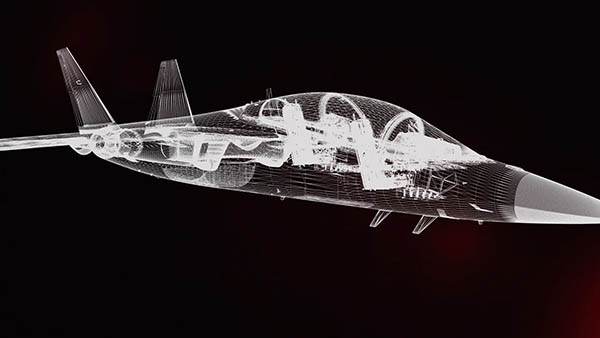 The T-7A is the first in the U.S. Air Force’s new digital eSeries of aircraft, weapons, satellites and assets — designed and built along a digital thread that embraces advanced manufacturing techniques to improve quality and enhance performance.

The T-7A Red Hawk trainer was conceived and designed using advanced manufacturing and 3D design techniques and is in the first phase of engineering and manufacturing development flight testing.

The aircraft moved from computer screen design to first flight in just 36 months.

“The U.S. Air Force is setting the tone for how the future of air and space dominance is designed, coded and built,” said Leanne Caret, president and chief executive officer of Boeing Defense, Space & Security. “I’m proud that Boeing’s eT-7A is helping our customers pioneer the digital engineering revolution. Global security threats aren’t slowing down, so we've adapted and we’ve e-enabled how we design, test, build and support products for our customers’ needs — moving quickly, taking smart risks and partnering in new ways to get the job done.” 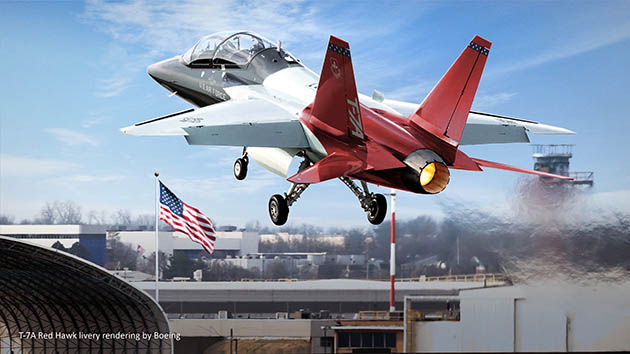 Designed using a digital approach that embraced model-based engineering and 3D tools, the T-7A Red Hawk accounted for an aircraft with a 75% increase in first-time quality, an 80% reduction in assembly hours and a process that cut software development time in half.

“By sharing information all along the design, engineering, build and flight test process from a single source, we are able to achieve higher levels of quality than ever before,” said Miller. “When the aircraft is finally assembled, it comes together with precision and less rework.” 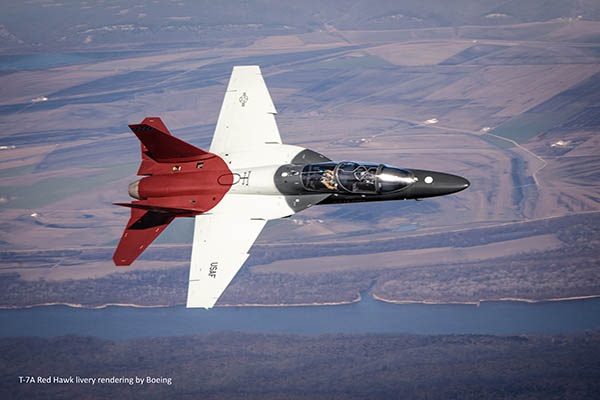 A Boeing T-7A Red Hawk streaks over Missouri as part of its engineering and manufacturing development flight testing. The advanced trainer for the U.S. Air Force is designed to evolve for future missions.

The two production-relevant jet trainers — resulting from a competition Boeing won to develop T-X training jets and simulators — have surpassed over 300 successful flights in their robust flight test program and are about to begin Phase 2 high angle of attack testing at Edwards Air Force Base, California.

Dan Draeger, Boeing Test & Evaluation chief tactical aircraft test pilot, said the aircraft continues to impress him with its stability and performance. He said he still remembers the aircraft’s first flight and how different it was from development sorties on other aircraft he’s flown. 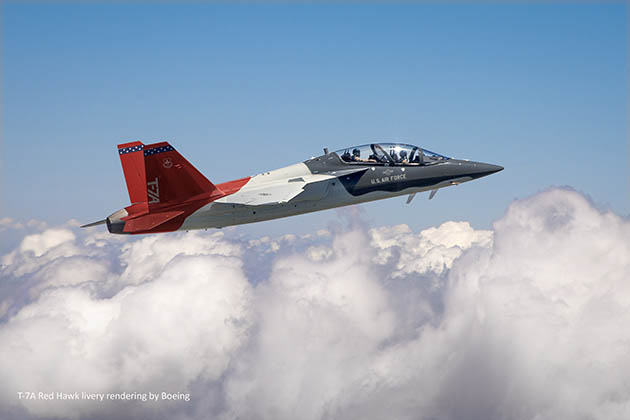 A Boeing T-7A Red Hawk flies amid clouds over the Midwestern United States.

“It was amazingly calm in the cockpit,” said the veteran test pilot. “We had already flown the jet in the simulator using the exact same digital software many times rehearsing for the flight, so when it came time for the real thing, we knew what to expect — the jet flew exactly like it was supposed to, no surprises.” 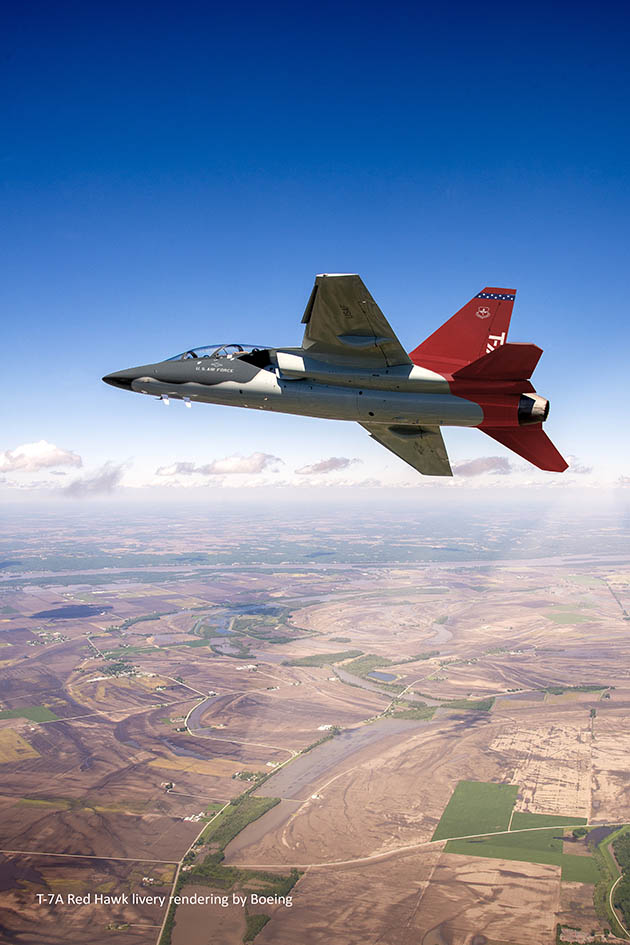 A Boeing T-7A Red Hawk makes an in-flight turn as it soars over Missouri.

In September 2018, the U.S. Air Force awarded Boeing a $9.2 billion contract to supply 351 T-7A Red Hawk aircraft and 46 ground-based simulator trainers to replace the Air Education and Training Command’s T-38 training fleet. The first T-7A aircraft are scheduled for delivery to the Air Force in 2023, with initial operating capability the following year.