EAGLE II UNVEILED: The F-15EX has been inducted into the U.S. Air Force at Eglin Air Force Base in Florida. The new fighter is equipped with fly-by-wire controls, the latest in electronic warfare systems and an advanced cockpit for increased survivability.
VIDEO: TIM REINHART/BOEING

A challenge from the U.S. Air Force: To outpace future threats, take the battle-proven F-15 and make it even better. 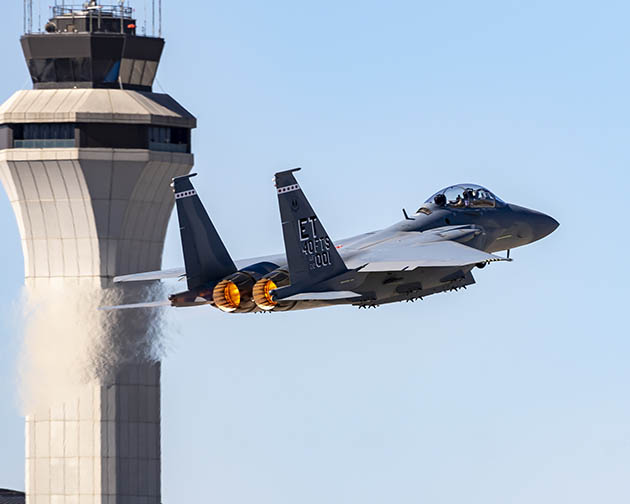 Enabled by innovation and forward-thinking processes, Boeing and the U.S. Air Force formed a collaborative effort to deliver the F-15EX Eagle II. The newest version of the legendary fighter incorporates the most advanced systems available, including next-generation design and technology built on a digital thread that will ensure the U.S. Air Force will fly it for decades to come.

Incorporating the latest in software development and Open Mission Systems architecture, the F-15EX is ready today to prosecute the most demanding missions of tomorrow.

To get to this point, to support customers’ needs, the Boeing team transformed its culture with initiatives such as agile innovative software, open architecture systems and digital engineering. 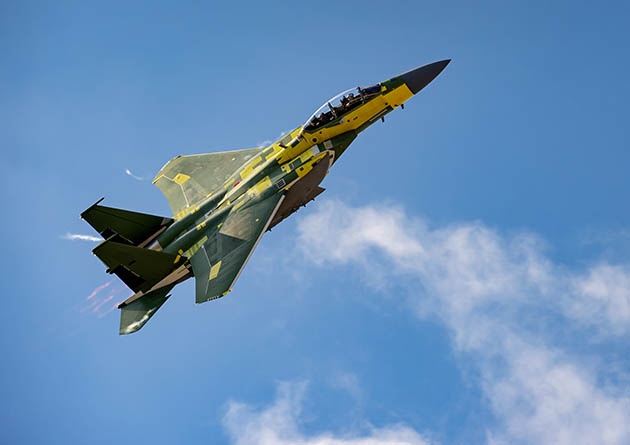 CLEARED TO CLIMB: Still in its testing colors, the F-15EX Eagle II begins its ascent into a "Viking takeoff" above St. Louis during its February 2021 first flight.

The U.S. Department of Defense has outlined a National Defense Strategy that delivers capabilities to the warfighter at the “speed of relevance.”

Boeing is paving the way, producing the software at a faster pace than ever before. 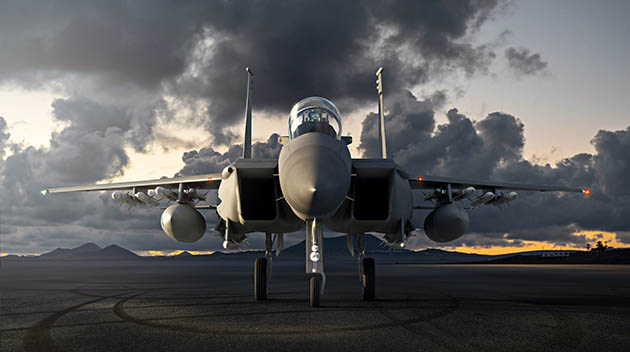 Early in 2020, F-15 Mission Systems engineers began the transition to agile software development, including hardware, software integration and test. The process is part of the DevSecOps road map, an engineering practice that unifies software development (Dev), security (Sec) and operations (Ops), allowing Boeing to develop and release capabilities to the customer more efficiently and quickly. 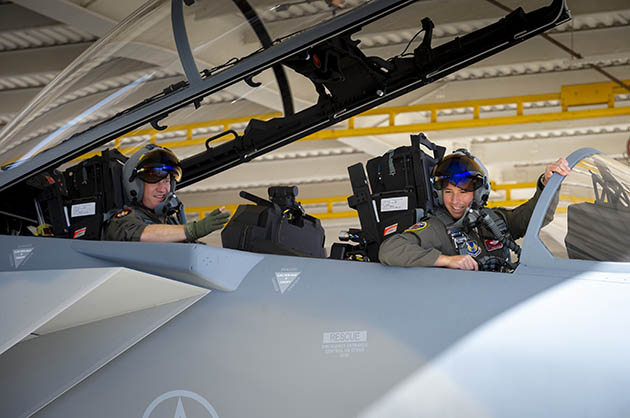 ON POINT: (From left) U.S. Air Force Pilots Lt. Col. Chris “Bluce” Wee and Maj. Brett “Spear” Hughes get ready to take off in the F-15EX.

A main driver in the transition to software development has been collaborating with the Air Force regularly during program increment planning events. The ultimate goal is to align the engineering team around developing the features and capabilities for the F-15EX platform that advance the program solution. The sessions should ultimately:

Using this approach, the Boeing team delivered the F-15EX software in less than half the time of the typical four-year software development cadence.

A key feature of the F-15EX platform is its ability to rapidly incorporate future technologies. Its open architecture will change the way the Air Force inserts future applications and capabilities and will protect warfighters by keeping them ahead of threats.

The F-15 Mission Systems software developers have created an autonomous test environment and are laying the groundwork for Open Mission Systems (OMS) architecture, which can host DevSecOps containers and orchestration — all in preparation for the future of cloud-based development. These tools also support third-party application integration — a must-have for the modern defense mission.

OMS-compliant technology also provides a standard interface between components that allows participants to develop capabilities using a common open architecture approach. By adopting this philosophy on the F-15EX, Boeing will advance and grow its legacy platform to allow rapid capability of new features in the form of containers and microservices that can be developed and deployed on the fighter jet.

Software containers package software code to allow it to run independently of any infrastructure or, in Boeing’s case, any platform. Containerization is a popular concept, gaining wide use in software development. Containers function like a smartphone app for the mission computer, as adapted by the software defense industry.

Boeing has recently demonstrated the ability to deploy the same software container on F-15EX aircraft without any recompilation. The containerized service is the same and agnostic to the platform or mission computer hardware. The container is processed through OMS-compliant messages, a uniform construct employed by the DOD.

OMS architecture enables maximum flexibility, interoperability and connectivity. The F-15 team is employing this process as a catalyst for the culture change and development process improvements required in next-generation software development across Boeing Bombers & Fighters programs.

It is critical to continue to support model-based system engineering concepts to complete Boeing’s safety-critical functional thread analysis. This allows the enterprise to model all the safety-critical functions of the mission computer and trace them to determine safety impacts as a result of software changes to avionics equipment.

Using this methodology, Boeing engineers can investigate risks electronically, before any physical code changes, and work to understand the challenges that lie ahead and hence develop mitigation plans. 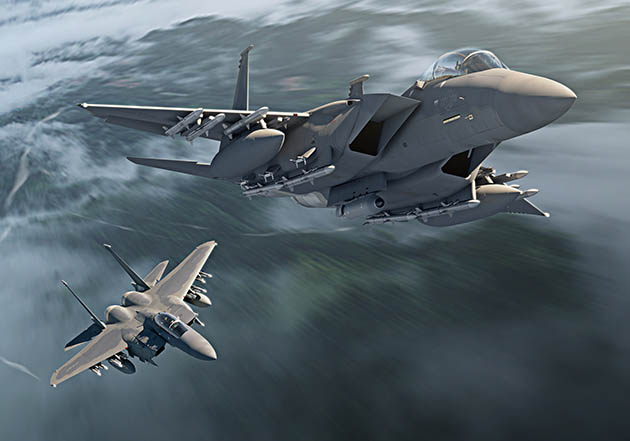 DELIVERING TODAY FOR TOMORROW’S MISSIONS: With its large weapons capacity, digital backbone and open architecture, the F-15EX Eagle II will be a key element of the U.S. Air Force’s tactical fighter fleet for decades to come.

Ultimately, this process lends itself to first-time quality, as explicit documentation traces and tags are added to source code, satisfying new process steps that ensure safety-critical code is not modified without further review.

The Air Force has voiced the urgent need for downloadable program code that functions just as safely and predictably in an aircraft as it does in a remote test environment. F-15 Missions Systems engineers innovate in this space every day. And the next iteration of the digital model could see Boeing engineers enhance the mission systems process for functional modeling.

The teams plan to prototype the interface control documentation for the entire platform, improving the visualization of new avionics hardware onto the aircraft. The tool will house block diagrams to account for the configuration.

This will improve communication about the interfaces, reduce design errors and minimize disconnects across the subsystems.

The goal is to have the F-15 mission systems architecture laid out digitally and make a full transition to model-based systems engineering.

The Air Force laid out its digital acquisition strategy in clear and compelling terms, which emphasized plans designed to disrupt input/output carrier signals of analog thinking. The strategy also explained how the so-called “digital trinity” of agile software, open architecture and digital engineering results in better ways of building systems.

The benefits: faster design, seamless assembly and easier upgrades for air forces of the 21st century.

The F-15EX’s role as a technology demonstration test bed ensures the Air Force can powerfully leverage its unique air vehicle infrastructure. This includes future innovations such as user experiences (UX) to improve and modernize the human-machine interface.

Also, a newly developed large area display (LAD) is part of the Advanced Cockpit System (ACS). These software improvements to the displays and symbols boost the sensor input and display capability previously constrained by the legacy hardware. 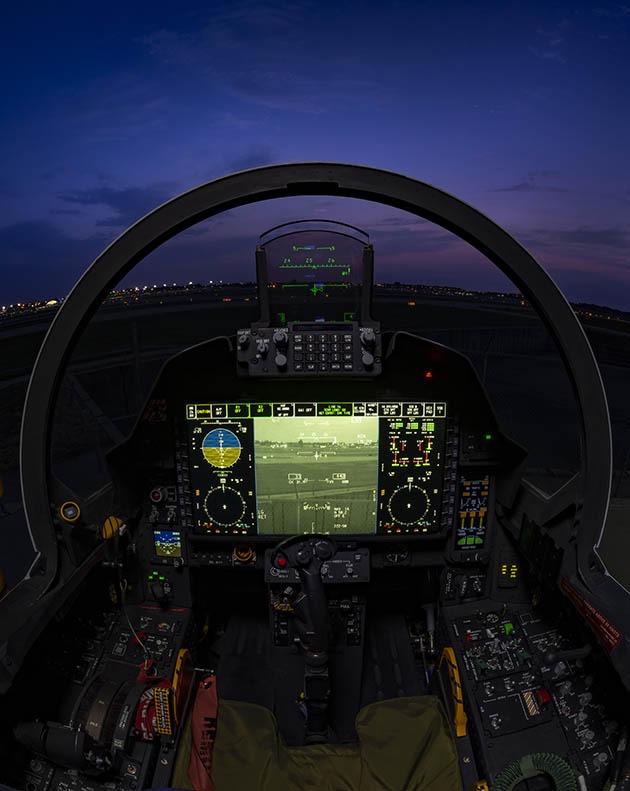 The first F-15EX fighter jet was delivered in March 2021, with the second joining it at Eglin Air Force Base, Florida, in April. The aircraft feature fly-by-wire controls, ACS, best-in-class weapons carriage, the world’s fastest mission computer, improved radar and advanced electronic warfare protection, and the newest version of the F-15 software operational flight program. Only two months after delivery, the Eagle II demonstrated its proficiency at a major Air Force exercise.

The fighter’s next-generation design makes it an ideal fit for the Air Force’s vision. For its part, Boeing is looking forward to providing a robust tactical aircraft capable of incorporating the latest advanced battle management systems, sensors and weapons.

Boeing is changing its processes and, more important, changing its culture to become more adaptive and innovative.

This road map of continual development will provide the tools needed to win the future fight. 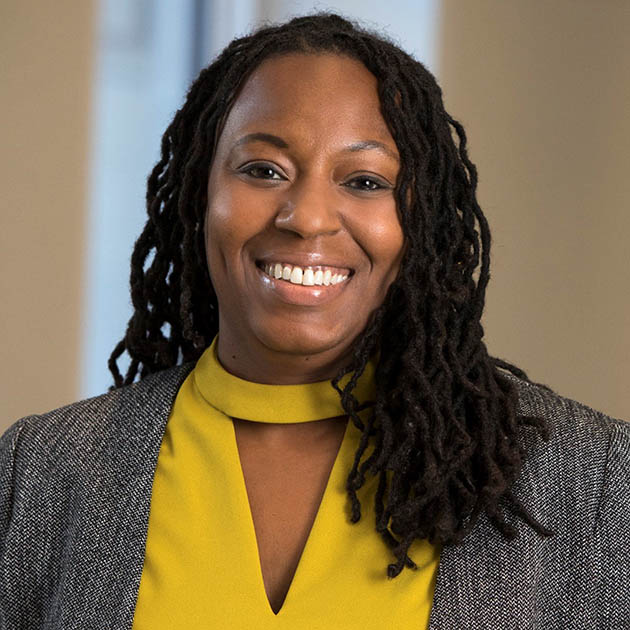 ABOUT THE AUTHOR: Engineer Tyra Holmes is director of F-15 Mission Systems. In this role, she leads the development and implementation of avionics hardware and software across the F-15 program.