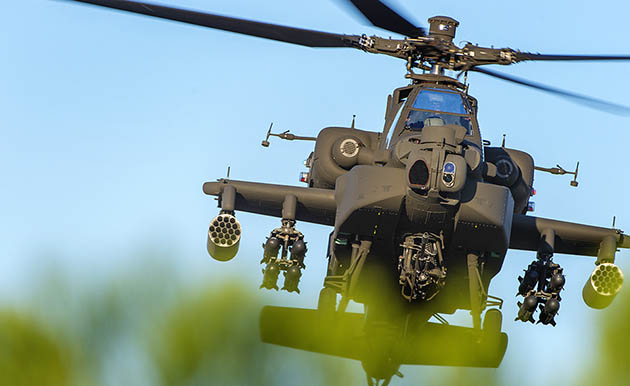 The AH-64 Apache helicopter is loud and proud. Sometimes too loud. So the team in Mesa, Arizona, decided to go beyond earplugs.

Engineer Jason DeStories from Boeing Research & Technology describes how he and his teammates created an award-winning, cost-effective innovation, repurposing scraps of shipping foam and polyvinyl chloride (PVC) pipe tied together with zip ties.

IQ: Where does the noise come from?

JD: The Apache’s environment control system (ECS) is used to keep the aircraft’s electronics and cabin cool. This air conditioning system must operate while the aircraft is powered up, undergoing testing, sometimes for up to eight hours. But the ECS emits a high-pitch noise, in excess of 100 decibels, about the same level as a jet taking off, a motorcycle or a jackhammer. The sound reverberates throughout the manufacturing workspace, impacting workers’ safety and ability to communicate.

HEAR THE DIFFERENCE: Listen to what happens when the hush kits are rolled into place by Apache Product Repair/Modification Technician Kenneth Doerr.
VIDEO: BOEING 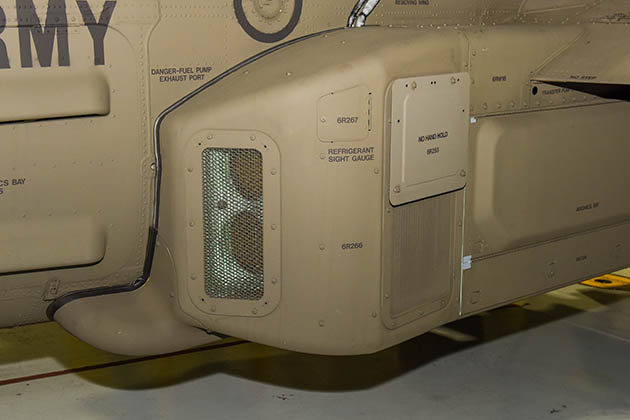 IN AND OUT: During testing, noise escapes from the air conditioning system of the aircraft from the inlet (left) and exhaust (right).

JD: I had worked previously with Talmadge Ryan, a repair technician in Mesa. He experienced the noise issue during experimental tests. When he was named the on-site “safety champion,” he made it his top priority to find a solution.

His original idea was to line a box with shipping foam. I added baffles with PVC pipe wrapped in the foam. We ran with it, and it worked astonishingly well.

After the prototype test, I formalized the design to handle the forces from the airflow and also confirmed with engineers that adding the devices would not limit the performance of the ECS system. 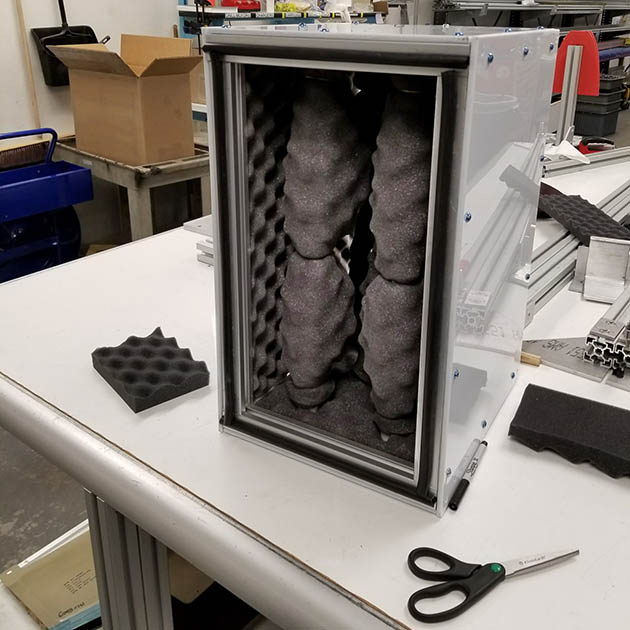 PROTOTYPE IN PROGRESS: An early hush kit using repurposed materials gathered from around the site. 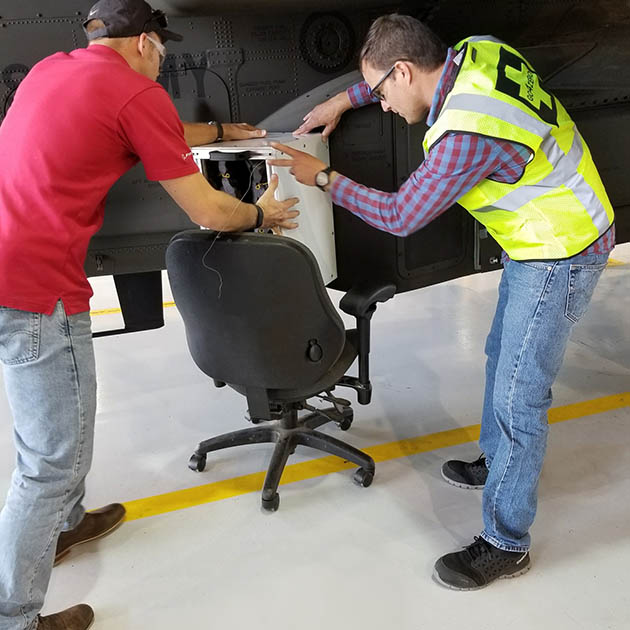 TEST 1, 2: Jason DeStories (left) and Talmadge Ryan use a chair to roll the hush kit prototype into place for early evaluation.

JD: We chose the materials for the prototype based on what we could find on-site for free. The aluminum for the box frame enclosure, the plastic for the side panels and the PVC pipes were all from the scrap pile in our lab.

Another colleague found the shipping foam in the receiving dock trash. We used a standard office chair to hold the unit in place while we did the first, crude prototype test. Everyone, including myself, was skeptical.

It wasn’t until the noise was drastically reduced during that initial test that Talmadge and I looked at each other and discovered we were onto something. 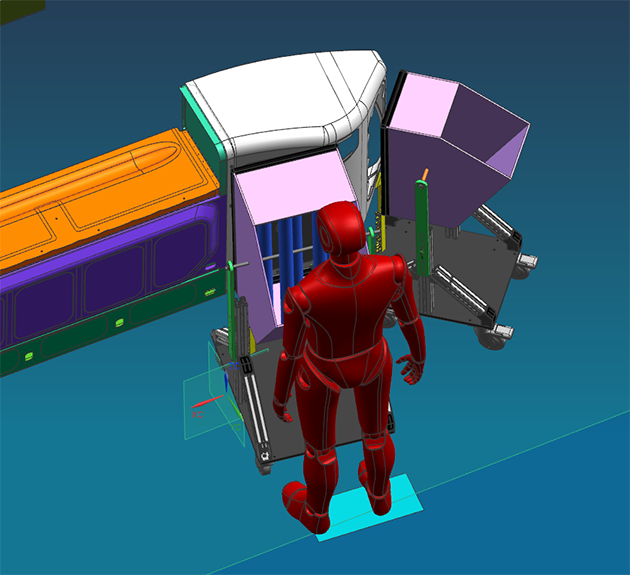 DIGITAL DESIGN: The team created renderings early in the process to work through modifications.

JD: An aluminum extrusion frame had panels attached to the sides. Then, we used rods with the shipping foam attached to them with zip ties. This was a makeshift “baffle” to disrupt the airflow and maximize the amount of impact to the sound energy with the foam.

We call it a “hush kit.” The foam absorbs the high-frequency noises. The baffling eliminates a direct line of sight and sound. This forces all sound energy through the foam and deflects noises internally to maximize the chance of absorption.

When we measure sound at the source at the inlets, for example, the hush kits reduce noise by 75%. 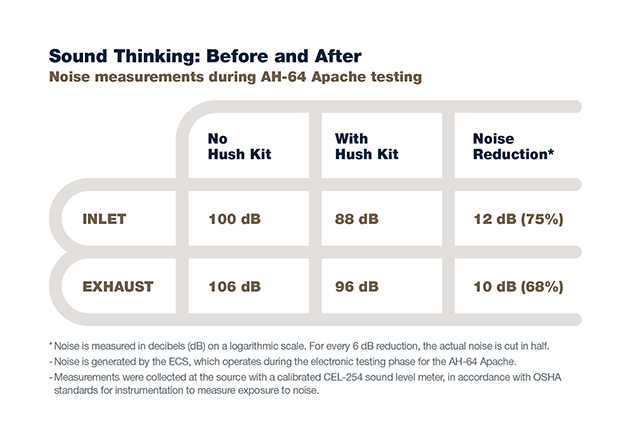 IQ: What details did you consider to create a useful device?

JD: There were four design challenges. We knew it had to have a small footprint. The shop was already limited in space. Each unit needed to be smaller than 24 inches by 24 inches. To achieve this, the base plate uses half-inch steel to account for the frame and the ballast, for stability.

Each unit also needed to be height adjustable to meet a range of aircraft configurations. A simple friction slider mechanism was attached to each side arm, allowing for a range adjustment.

Third, each unit needed to gimbal in all axes (x, y and z). This was vital because the seal needs to fit tightly to the aircraft in order for the sound suppression to work well. Axes x and y were dealt with using swivel bearings attaching the hush box to the frame. Casters on each corner of the base plate took care of the z axis.

Fourth, due to the quantity of hush kits needed, the box was designed to be plastic-welded by a supplier with the holes pre-drilled in the box. This made assembly much more efficient. 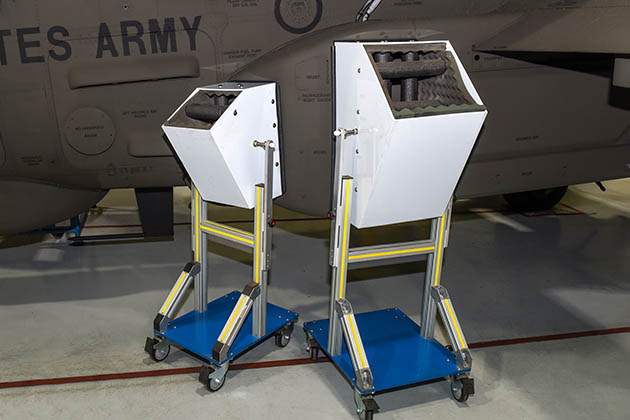 WHEEL DEAL: The hush kits are easily wheeled in and can be adjusted to the correct height to fit snugly and to significantly reduce noise.

IQ: What are you most proud of?

JD: A notorious problem which plagued the site for years was solved by a relatively simple and inexpensive solution.

I’m proud of Talmadge for coming up with a method to minimize sound at the source rather than accepting the status quo. And the team kept the project simple the whole way to avoid the traditional pitfalls of more complicated ideas.

To date, 10 hush kits have been developed, with plans for the Mesa site crew to build more and generate customer awareness of their innovation.

While the noise is significantly decreased, hearing protection is still necessary at the Mesa site. The Occupational Safety and Health Administration (OSHA) requires employers to keep the noise average below the permissible exposure limit of 90 decibels. 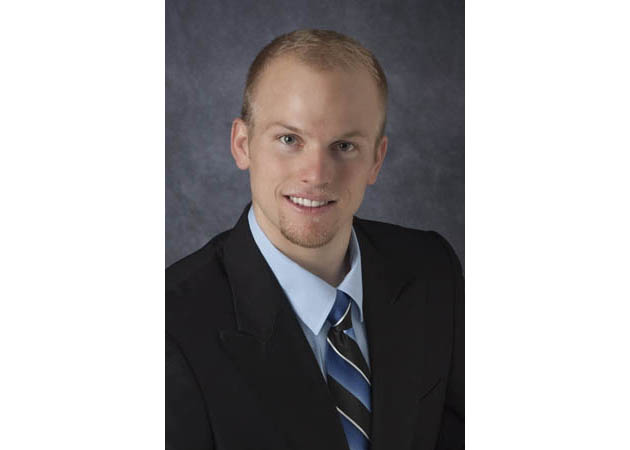 ABOUT THE AUTHOR: Jason DeStories is an engineer at the Boeing campus in Mesa, Arizona. His expertise is in rapid concept creation, mechanical/aero designs, development of emerging technologies and implementation of production processes.

The award is presented by the NHCA, in partnership with the National Institute for Occupational Safety and Health and the Council for Accreditation in Occupational Hearing Conservation. The award recognizes organizations that document measurable achievements in hearing-loss prevention and enable the sharing of leading-edge best practices to improve the workplace and demonstrate leadership.