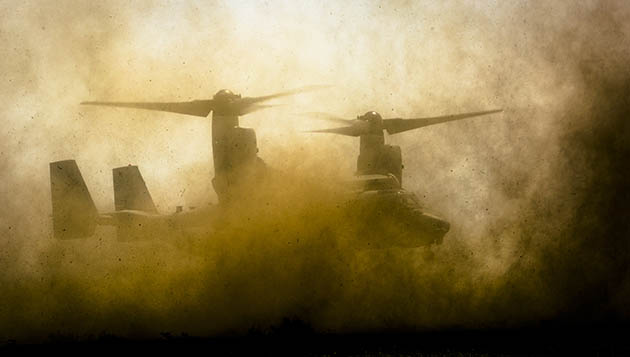 V is for vertical in V-22 Osprey. But it might as well also mean versatility. Military customers are drawn to the multirole combat aircraft for its ability to vertically take off and land in tight spaces like a helicopter, while also providing — with its tiltrotor design — the long-range flight and speed capabilities of an airplane.

But a potential issue that arises with many vertical landings is known as rotor downwash. The rotor blades from a descending vehicle can disperse so much dirt and dust from the ground that it sometimes becomes a safety issue. 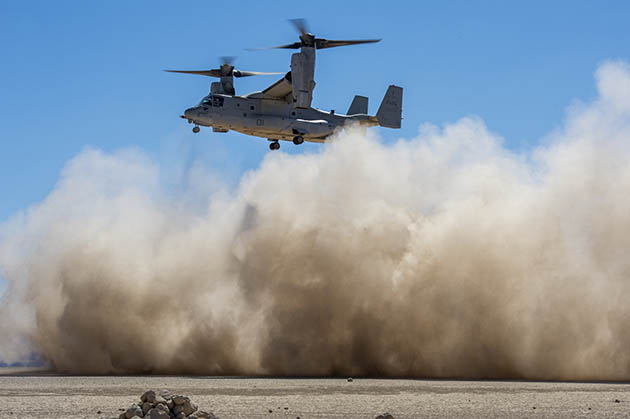 “The rotor downwash can create severe ‘brownout’ conditions for a pilot,” said Doug Fischer, a human factors engineer for the V-22 program. “That can be quite stressful and disorienting as they’re trying to land in a relatively small area.” 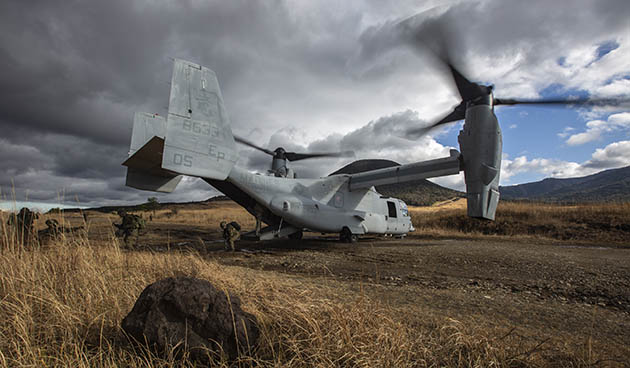 DIRT ROAD DROP-IN: The V-22 Osprey is known for its ability to operate in a limited landing area. But that can result in decreased visibility, depending on the terrain.

As a result, a cross-functional team of about 20 engineers came up with a solution to help combat reduced-visibility landings. The Reduced Visibility Landing Symbology (RVLS) team created software that significantly aids pilots during touchdown. DESERT DUST: A V-22 Osprey lands at an airfield in Kuwait.

“This solution allows pilots to land both faster and more accurately in limited visibility without adding the burden of configuring the system or formally designating a landing zone,” said Jacob Kowalski, a flying qualities engineer for the V-22 program. “It’s also easier to monitor and teach other pilots.”

With the new software, pilots now see a more detailed picture of where the aircraft is going. There’s a moving map display in the cockpit with added symbols and cues that guide pilots. The display activates about 3 miles (5 kilometers) away from the landing area to within 100 feet (30 meters) of the desired spot. All this integrates seamlessly with the computing, display and sensor hardware available on even the earliest Ospreys.

“It used to be that pilots would need to shift their focus between the cockpit display and the landing area, while at the same time calculate necessary changes in speed and altitude,” said Fischer. “The RVLS, however, provides visual cues on how to manage flight controls so the pilots can better maintain a safe descent profile. The result is an intuitive solution that allows the pilot to focus more on display symbology without shifting visual scan outside of the aircraft.” 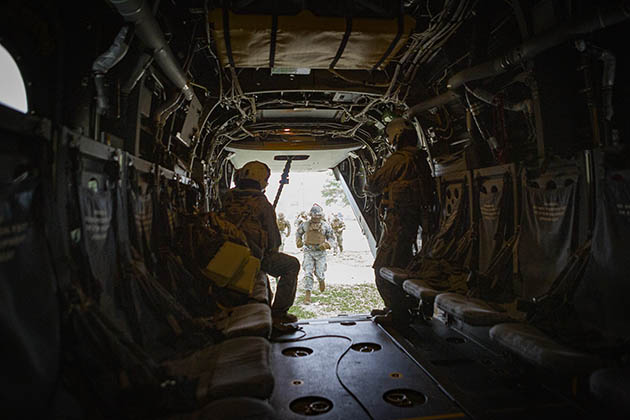 INSIDE OUT: RVLS contributes to a more efficient arrival and departure. Here, U.S. Marines conduct training from a V-22 Osprey in North Carolina.

A military test pilot said, “This is where RVLS really shines — the pilot could not visually identify the landing zone far out but was able to get on and stay on profile until later in the approach when the zone became visible again.”

An operational pilot said, “RVLS is a game-changing capability.” 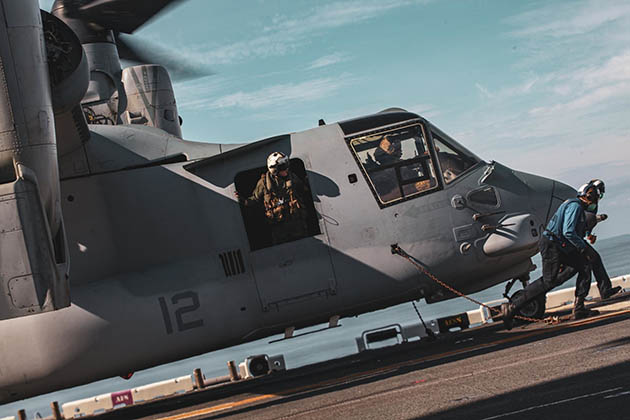 The RVLS team worked on the project for four years, including many hours of flight testing to validate the software in day, night and varied levels of brownout conditions.

Kowalski said it’s gratifying to make a difference. “Quite simply, we improved safety by making both pilots’ jobs easier.”