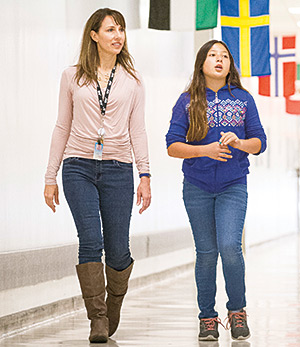 Powering a highly competitive technical career takes perseverance for anyone, more so for women in engineering.

When Julie Perkins brought her daughter Kiley to work a few years ago, something unexpected happened.

Perkins, a chief engineer and Boeing Associate Technical Fellow, wanted to inspire her young daughter to follow in her footsteps and, perhaps, pursue a career in aerospace engineering. But, as the child stood in the Southern California factory, gazing at a 702HP satellite, the very one her mother helped design as then-chief engineer for quality, she matter-of-factly asked, “But what about the light? Aren’t you going to turn it on? You know, for the ‘satell-light?’”

Perkins still gets a kick out of sharing this memory.

“It sort of sums up her enthusiasm for what I do,” she said, with a smile. “She is smart, but definitely prefers the arts.  All the stuff I hated in school, she’s already so much better than I ever was.”

Some people know from a young age what they aspire to become as an adult—a doctor, a firefighter, an engineer. Perkins wasn’t quite sure where her future would lead. Her parents, neither of whom attended college, were loving and supportive of both her and her older brother.

“He loves to tell people, ‘There’s my sister, the rocket scientist,’” Perkins said about her brother, who became a dentist.

As a child, Perkins excelled at math and science, and her father instilled within her an early love for engineering. Dad owned a small silk screen business, and he loved to tinker with cars in the family’s garage. It’s how the two spent their quality time, Perkins recalled.

“He would tell me from a young age, ‘You are not going to be a damsel in distress,’” she said. “So, as a kid, I played with Barbie dolls, but I knew how to fix a car, too.”

Perkins became more interested in engineering after taking a high school career placement exam. The test revealed that she should pursue engineering or mathematics, so she set her sights on becoming a jet fighter pilot like in the movie “Top Gun.” Unfortunately, vision issues dashed her dream of becoming a pilot, so she decided to design the airplanes instead.

In the early 1990s, Perkins was a newfound undergraduate student studying mechanical engineering at the University of California, Irvine. She was also one of two women in the entire engineering program.

“By the end, I was the only woman in their graduating class,” she said. “My peers and professors thought it was so cool that I was there with them. They were incredibly supportive.”

But just like many college graduates before her, Perkins found the real world sobering.

“My daughter doesn’t really ‘get’ what I do,” Perkins explained with air quotes. The same can be said for many people she encounters. Upon meeting someone new, Perkins describes her role as an aerospace engineer and the type of highly technical work she performs.

“People don’t believe I’m an engineer,” she said. “I dress normal. I don’t go to ComiCons. I don’t fit that stereotype of an engineer.” Being a woman is also not representative of the stereotypical engineer in the minds of most people— or in the reality of most technology companies.

Over the past decade or so, the push to encourage more women to pursue STEM fields has begun to normalize the idea of women engineers. This drive has begun to open access into many fields for women scientists and technologists. But, it seems that access comes with setbacks.

In 2016, the Society of Women Engineers (SWE) released its Climate Control study, which explored specific gender and racial bias within the engineering profession. The study revealed three distinct patterns of prejudice that persist against women engineers versus their white, male counterparts.

“While we are making strides and engineering programs are growing, the percentage of women in engineering has remained relatively constant for almost two decades,” said Karen Horting, CEO and executive director of the Society of Women Engineers.

According to the SWE study, nearly 61 percent of women versus 35 percent of white men reported that they have to prove themselves repeatedly to get the same levels of respect and recognition as their colleagues. A separate study published in 2010 in the Journal of the Association of American Medical Colleges showed that women post-docs needed to be twice as productive to receive the same competency rating as their male counterparts.

Women engineers often find themselves needing to walk a tightrope, navigating both pressures to behave in feminine ways and pushback for behavior seen as “too masculine.” This resulted in 67 percent of women engineers avoiding assertive behavior, according to SWE. Additionally, one-third of women were more likely than white men to report pressures to let others take the lead. Others reported that they were more likely than their white, male counterparts to perform administrative tasks, such as scheduling meetings, taking notes or planning office parties (55 percent of women versus 26 percent of white men).

A separate study, conducted by Cornell University researchers in 2007, found that among women, mothers were dramatically less likely to be hired and promoted, offered sharply lower salaries, and held to higher performance and punctuality standards than equally qualified women without children. The only difference in their resumes: listing membership in a parent teacher association.

“To instill real change and truly diversify, we need to change the perception of what an engineer looks like,” Horting said. “We need to make engineering appear as a normal career path for women, as it is now viewed for men, and we need to provide support and resources for women in engineering to make sure we keep them there and help them  reach their fullest potential.”

At the first engineering company Perkins joined in the early 1990s, she was the only woman among a group of colleagues who were all decades older. Although she was accustomed to being the only woman among male  engineers, as was the case in college, the experience  at work was vastly different from the supportive  environment she left upon graduation.

“It was doing work that wasn’t challenging or motivating,” she said. Her situation became worse when she felt that she had experienced sexual harassment by some of her colleagues. “That’s when I left for Hughes Space and Communications,” which was acquired by Boeing in 2000.

Perkins said her teams at Boeing have been among the most gender-diverse of any of her previous employers. The 702SP satellite team (affectionately nicknamed “GirlSat” because every lead on the program was a woman) was one of Perkins’ favorites.

“It was one of the most efficient programs I’ve ever worked on,” she recalled. “I remember when we launched our first 702SP. Seeing videos of our product in space was amazing.”

“It was the most unique team and program I’ve ever worked on,” said Jeanne Morris, customer training lead in the Customer Operations Support Center in El Segundo, California—and member of GirlSat.

From the beginning, the team set out to disrupt the market and challenge the norm. They pushed back. They challenged expectations. The new satellite became a market-moving innovation for Boeing, featuring all-electric propulsion, next-generation avionics architecture, and additional mission flexibility for its operators and broader services to users.

“We had to be extremely communicative with customers and with each other,” Morris said. “We were all technically smart, but we all had really strong soft skills, too.”

As the 702SP program evolved, the team focused on technical execution and growth of its team members, and Perkins stood out as one of the team’s strongest leaders, Morris said.

“She’s wonderful,” Morris said. “She’s smart technically, and she was so supportive of every person on the program, taking time to explain the methodology behind her decisions.”

The women of GirlSat banded together and bonded so well because there aren’t many of them, Morris said.

“Those were among the best years of my career because it felt so empowering,” she said. “This team was truly focused on mentorship, growth and elevating all team members.”

As her 4th-grade daughter gets older, Perkins reflects on her roles as an engineer and a single mother; she admits it’s often challenging to balance the two. Throughout her career, she was keenly aware of differences in gender roles; parenting can heighten those expectations.

“As mothers, we often have to do most of the balancing, and I’ll be the first to admit that it’s hard,” she said. “I have to drop my daughter off at school and daycare, then try to make quality time for her in the evenings. And keep a clean house. And try to fit some workouts in between.  It’s tricky trying to make it all fit in 24 hours.”

Perkins considers herself lucky to have a strong network of family and friends nearby who can help care for her daughter when work demands pick up or when business travel, sometimes internationally, is required.  What’s most important to Perkins is ensuring her daughter is nurtured and supported in her passions—just like she was growing up.

“I’m very independent; I never wanted my daughter to grow up thinking she was dependent on anyone,” Perkins said. “It’s OK to depend on people, but don’t be dependent.”

Perkins says in her career, the biggest challenge she’s learned to overcome was feeling comfortable and confident in her own skin.

The best piece of advice she bestows on her mentees— both young women and men—is to be yourself.

“People are quick to pick up on you when you’re not genuine, and then you lose their trust,” she explained. “With me, what you see is what you get. People are either going to accept it or they’re not. When I stopped trying to be what was expected of me, that’s when I began to feel most confident.”