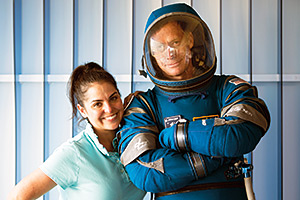 Ride in comfort on the CST-100 Starliner.

Picture this: Your vehicle is fully fueled and ready to go. An instrument panel digitally reads all of the carefully monitored indicators of your ride. Awaiting the exciting journey, your gloved hands grip the controllers as your body settles into the comfortable seat. The climate control is just right. You look around and notice your interior sports the latest innovations in features. It’s a feeling of luxury, not unlike the excitement of a sports car speeding down a highway.

Only this is not a sports car. It’s Boeing’s CST-100 Starliner spacecraft, ready to safely propel you into space atop a United Launch Alliance Atlas V rocket… and in the latest scientific style.

Creating a spacecraft involves more than running complex equations and meeting safety requirements. There also is room for Boeing to add its unique flair through innovation, art and design. Adding to the accomplishment of being the first commercial space capsule of its kind, Boeing employees are making use of creative ideas, high-fidelity mock-ups, trainers and simulators to ensure the Starliner incorporates safe and effective design innovations. These efforts reflect the commitment of the company’s people to support space exploration, one of mankind’s most inspirational achievements.

Melanie Weber, a design engineer for Boeing’s Commercial Crew Program, knows firsthand about the influence of art and design in the development of a spacecraft, having been involved with the program from the blueprint to implementation phase.

“It started off with us imagining everything we possibly could, pulling inspiration from science fiction movies to best practices of Boeing’s Commercial Airplanes business,” Weber said.

“As we worked hard to align luxury and aesthetics with requirements unique to human spaceflight, we found ourselves thrust into an evolution that took into account a variety of factors for the crewmembers.”

What started off as a seemingly simple chance for the people on Weber’s team to put their own mark on a historic spacecraft became a design and technical challenge, as the team constantly had to balance customer requirements, safety and design ideas. Choices in leather were nixed due to toxicity concerns. Kevlar and flame-retardant cloth were preferred over nylon and polyester. But, that didn’t mean the team wasn’t able to put its own touch on the Starliner. Turns out that spacecraft luxury can have a different feeling.

Like many luxury cars on the market today, the Starliner offers innovations that provide simplicity, comfort and style, by combining elegance and technology. Touchscreen displays replace thousands of switches and dials, leaving those only for critical phases of the spacecraft’s journey. Bulky paper-based pilot flight logs have been supplanted by sleek tablets that enable real-time communication with ground support teams and even provide in-flight entertainment. The vehicle’s soothing color pallette and LED lighting are based on years of experience with Boeing’s commercial passenger jets. Custom contour seats and even a tailored Boeing blue spacesuit complete the package. The spacecraft development team also strives for the Starliner to become a top safety pick, putting every element into extreme environmental, shock and loads testing with simulated humans.

One of the primary means of testing new interior designs is through the use of mock-ups, trainers and simulators.

Astronauts can operate two Boeing-built trainers and a fully immersive mission simulator installed at NASA’s Johnson Space Center in Houston. The devices enable astronauts and flight controllers to gain familiarity with Starliner simulations and crew interfaces, including designs for ergonomics and ease of movement.

Through use of the trainers, astronauts and flight controllers learn how to operate switches and touchscreen pilot manuals, understand onboard displays, train for planned activities and react quickly to unusual events that could arise in the harsh environment of space. These movements also give users the opportunity to give feedback on interior designs and other human factors that otherwise may not appear on paper designs.

“Think of the trainer as our training wheels,” said Eric Boe, one of four NASA astronauts training for a commercial crew flight to the International Space Station. “As we get more familiar, the training wheels will come off, and we will start advancing to the next systems.”

Included in training is an immersive, high-fidelity simulator, with interiors that faithfully mimic and encapsulate all mission scenarios.

This flight-like simulator, built to resemble the Starliner, isolates astronauts from outside distractions as they learn from full out-the-window visuals, audio and vibration cues, as well as onboard personnel and ground controllers.

The simulator, just like the trainers, offers unique opportunities for Weber’s team to gauge the reactions of the items’ users. Design engineers find out how factors like cabin color schemes may help astronauts orient themselves in space. For example, white tones make spaces appear larger than dark colors. The team also can get crucial feedback on seat comfort—important when trying to break the bonds of gravity at launch.

“Being in the cockpit and learning the muscle memory of where your hands are and how to manage the routine and emergency functions is really important,” said NASA astronaut Suni Williams. “It takes us to that final stage of getting ready and acclimated for the real spacecraft. It is really exciting to be working with the other aspects of the whole mission, which is the control team, and this is where that comes into play.”

Some changes came with a single observation, and could mean the difference in a joyful ride and an uncomfortable one. During one evaluation, the team noticed that astronauts had difficulty maneuvering over a particular area of the Starliner engineering mock-up in Florida. As they maneuvered over the area, the lack of handholds made it difficult to climb into the pilot seat. They decided that a small climbing gear clip would be used for the crewmembers to navigate into their seats.

“Even though it was a small change, we still had to take a lot of measurements and even agree on the color of the clips,” said Weber. “But really, it only helped us to be more creative and flexible in finding new ways to get the crew safely into the vehicle.”

As lessons learned from trainers, simulators and mock-ups eventually make their way to the actual spacecraft, crew members can be confident that the finished product will incorporate some of the comforts they enjoy right here on Earth. The Starliner’s first crew flight test to the space station is targeted for 2018. It will be Boeing’s first commercial flight transporting humans to that destination.

“It all comes down to doing what we can, with what we have, and what can be allowed,” Weber said. “At the end of the day, the final product will speak for itself—that we mastered safety and comfort.”